Bette Davis is one of my favourite actresses so to be asked to take part in a blogathon honouring her was a sure bet. Crystal is paying tribute to the great lady with a mighty fine blogathon. My choice is Watch on the Rhine.

Watch on the Rhine

Taken from a Lillian Hellman play, Watch on the Rhine provides much in the way of drama as it focuses on a member of resistance to the impending Nazi threat and what he must do to fight.

In the year after the beginning of World War II, German engineer Kurt Muller, his wife Sara and their three children enter the United States. 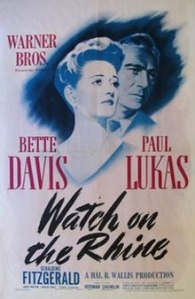 Kurt has been involved with fighting the Nazi’s with underground work for the past seventeen years. The family resides in Sara’s mothers house in Washington, D.C. Her mother, Fanny Farrelly  is a society maven who welcomes them back but is unaware about why they are there. The resolute Kurt largely keeps his underground work secret as can be. But there is someone amid all of this who grows suspicious of him. That person is the conniving Teck de Brancovis; a Romanian Count who is also stays and has with Nazi sympathies. He immediately distrusts Kurt on sight and takes it upon himself to weasel what he can out of him. He attempts to blackmail Kurt and expose him, leading to dramatic consequences for everyone involved.

Herman Shumlin allows the story to flow well and doesn’t resort to any visuals tricks, so as to draw more attention to the events on screen. The script is rich with meaningful speeches and impassioned dialogue that allow the actors to shine. Now Watch on the Rhine is not flawless by any means. I’m sure many will see this movie as a propaganda piece and very much of its time. But that ignores the message of fighting for what’s right and standing by your beliefs, which can still be timely even now. Sometimes that message is heavy-handed but it’s mostly depicted handsomely. Occasionally the running time feels stretched and I for one believe some trimming may have benefited Watch on the Rhine. But these flaws aside and the fact that I wanted just a bit more from it, it’s still a great movie with a message that is conveyed throughout. And once the tension rises in the situation, the film gets better and filled with immediacy. A driving score from Max Steiner is a string in the film’s bow too.

Paul Lukas is rightly dignified and quietly strong in a performance that garnered him an Oscar.

His greatest asset is his passion and dedication, showing Lukas as a fine actor in tune with the part of a crusading man fighting against fascism and Nazism. It’s a very subtle and natural performance that it often feels like he isn’t acting at all, so exact is his work. And complimenting that nuance is a finely tuned portrayal by Bette Davis. She was often known for her full force delivery but toning it down as the supportive wife here reveals a loving and softer side to her. I liked watching these two work together with a lovely chemistry and dramatic power. Lucile Watson is fine playing the part of the oblivious wealthy mother who is more concerned with her rich life than mere politics. Stealing some of the show is George Coulouris, who is excellently devious and fully warranting of villainy. It is he who kicks events into place with his plots to expose Muller. And there’s Geraldine Fitzgerald making an impression as the wife of the opportunistic Teck.

Bolstered by excellent dialogue and performances, the plight of the individual and the fight for freedom are well dramatised in Watch on the Rhine.