A stylised and brutal film that also manages to be beautiful at times, Lady Snowblood is quite the experience as the title character slashes her way for retribution. A film that had a huge influence on Kill Bill, Lady Snowblood stands very well on its own feet as an eventful and arresting Japanese action/ revenge thriller, based on a popular manga series.

We open with a baby girl being born in a prison to a mother who speaks of her being an instrument for vengeance. She dies shortly after, and the baby who is named Yuki, is raised by a guard and a master.

The vengeance her mother spoke of relates to a past event in which her husband was murdered and she was raped by a group of four criminals. Her mother killed one of the group and was sentenced to life in prison. Conceiving a child, knowing that it will one day deal out retribution, Yuki was created for this purpose that will be hers from birth. Yuki is trained to become a warrior as a young child by her skilled master, knowing that as she grows older, her destiny of retribution beckons. Turning 20 and with the Meiji Era upon everyone, beautiful Yuki starts her bloodthirsty quest. She manages to locate people through contacts and her quiet unassuming demeanor, that covers her grasping rage that is concealed much like the katana in her umbrella. The taking down of all of these corrupt and villainous people is going to be anything but simple, yet Yuki is completely focused and nothing is going to get in the way of her goal and what she was created for. Along the way she meets Ryūrei Ashio, a writer who documents her story( naming her Lady Snowblood) as it gathers momentum and Yuki eliminates the criminals who destroyed her mother, one by one.

Toshiya Fujita is an impressive and dazzling director, whose approach to the material brings out how dynamic the various threads of genres it covers, as they are pulled together for a memorable movie. Fujita’s largest achievement and asset in his weaponry is his spectacular eye for using the camera in so many unique ways. Jump cuts, point of view shots and a collection of gorgeous swirling zooms are just some of keen stylistic choices that leave you with your mouth wide open. 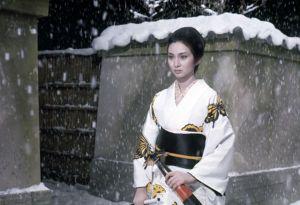 Taking the nonlinear avenue was an inspired choice that pays dividends as we slowly gain information about Yuki, her past and purpose that don’t for a minute feel distracting. The film could have easily become a jumbled mess, but the use of narration and techniques make certain that the nuggets of knowledge we gain are not just overly filler and actually means something to the plot. While Lady Snowblood is a very violent film with geysers of blood at almost every turn, it strangely becomes serene and breathtaking, even in moments of horror and bloodshed. This is largely down to the striking colour scheme and cinematography( largely consisting of red and white) that memorably mirrors the heroine at the centre, who is very beautiful but capable of vengeance for which she was born for and executes with extreme prejudice. The choreography of the fight scenes is handled with a balletic poise and nimbleness, wonderfully realised in blood-soaked glory through the aforementioned multitude of camera techniques and visuals. Yet although the revenge and violence of the piece draws the attention, Lady Snowblood masterfully allows a commentary of a changing time to seep in. The setting is the Meiji era, where Western ideals where becoming popular in place of tradition in Japan, leading to some unrest that the film depicts at a lot of points. It is a great detail in the film as it clearly has more on its mind than just hack and slash, which is kept on an even keel with aplomb and enough entertainment to supply both. And a genuine unpredictability to parts of the narrative keeps the film bubbling on with  surprising elegance amid the savagery. Music wise, Lady Snowblood takes many paths, further heaping the disparate influences it has on everything.

Meiko Kaji spearheads the movie as the eponymous warrior, whose piercing stare along is enough to do damage.

Kaji uses her glacial beauty and combines it with a supple grace and almost unearthly stillness that makes Yuki a beautiful but fearsome character. The character is not without compassion, but the biggest highlight of her is her will and vengeance that are embodied strikingly by Kaji with alarming intensity. The sheer amount of rage that Meiko Kaji projects through her eyes is striking and at times frightening, you won’t forget her intense orbs as they burn across the screen with a searing amount of ferocity. Toshio Kurosawa impresses as the writer who tells Yuki’s story and may have a secret to hide. The three actors playing principal villains of the piece, Eiji Okada, Sanae Nakahara and Noboru Nakaya all convey nastiness and gleeful evil to a very successful degree. Everyone is fine in their roles, but it is Meiko Kaji that retains the largest impact as the mistress of retribution and revenge.

A highly influential film that boasts beauty and barbarism in quick succession, Lady Snowblood stands as a compelling film of style and substance.