The effervescent Virginie asked me to join her blogathon on classic star Grace Kelly. With Kelly being an iconic movie star and a real life princess, how could I ever refuse? To honour the beauty and splendour of Grace Kelly, I decided to review the romantic adventure Mogambo.

A gorgeously photographed romance/adventure, Mogambo provides good entertainment and classic Hollywood stars to be dazzled by . And while it isn’t major league work from John Ford, its star quality and passion is still very much exciting to view.

Victor Marswell is a rugged, experienced big game hunter and safari businessman whose life is going smoothly in the wilds of Kenya. 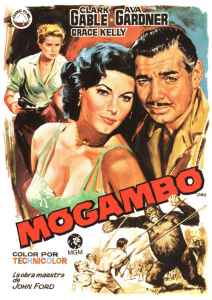 With his business booming, he can’t really ask for more. Events however take a turn with the arrival of Eloise ‘Honey Bear’ Kelly; a gorgeously outspoken and free-spirited showgirl who has been stood up by a suitor. Having to occupy the same space with Marswell until the next boat back to her planned journey, the two sparring individuals begin a sensual relationship. But Marswell is more concerned with his business and cools the relationship, much to Kelly’s consternation. Yet Kelly’s journey back is halted and run aground, meaning she has to return to Marswell. Around this time, anthropologist Donald Nordley and his posh wife Linda arrive, with wanting to observe the gorillas of the region for study. The prim Linda, who is all about manners and decorum, begins to take a liking to Marswell, seeing as her husband is more concerned with his studies. This of course arouses jealousy from Kelly, who takes it upon herself to stir things up for all involved. While Donald remains oblivious to his wife’s obvious attraction to the uncouth Marswell, a love triangle falls into place.The competition is on as both Kelly and Linda angle for the affections of Marswell amid the wild landscape.

John Ford takes us on safari with his gift for using visuals and settings to capture the attention and contribute beauty. Ford has often done this in his classic Westerns and here is no different.

Mogambo may not be a masterpiece, but there’s no denying the sumptuous visual direction of the great John Ford and his keen way of making locations come to life. Animals and wide, vast sights are glimpsed in nearly every frame of this torrid take, accentuated by alive cinematography and luscious colour. Mogambo is very much a melodrama and one of feverish emotions as wild as the surroundings. This approach is well utilised for the torrid feelings that attempt to be kept under wraps, but spill over with delicious passion and fruitful events. Only later on foes the drama get a little too overwrought for its own good, thankfully the stars and scenery can make up for those cracks. Mogambo is also a very saucy movie, Granted, the sexual sizzle is mainly confined to innuendo given the time period the movie was in, Mogambo still steams things up in its own naughty way. It’s the verbal sparring of the three that brings fire and vibrancy to a sometimes sleepy film; one-liners and veiled seduction are checked off the list and explored frequently against picturesque backdrops.

The stars are the thing and you couldn’t have asked for three more glamorous people than Clark Gable, Ava Gardner and Grace Kelly. 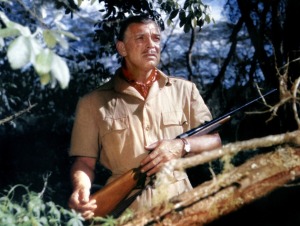 Clark Gable, now in the later years of his career, still has the charm and panache to pull of his part. He is world-weary but immensely jaunty, especially in that grin that he employs. He wasn’t known as the King of Hollywood for no reason. The ravishing Ava Gardner is relaxed and appropriately sassy, cracking one liners with ease and wit. Her devilish appeal and devastating good looks are matched by her subtle shading of the character who is tough, sexy and unexpected. Gardner is suitably fetching and confident in her acting; obviously relishing the sizzling role given to her.

Grace Kelly rounds out the central trio and at the point of major stardom, beautifully plays the repressed Linda who is not quite as innocent or lily-white as we first see her. Kelley has the right amount of ice and fire for the part( which would later lend itself well to roles in Hitchcock movies) and looks simply gorgeous throughout. Starting off prim and almost childlike, her desire emerges and her reserve thaws to show a passionate woman. It’s a nice part for Grace Kelly that compliments the work of Gable and Gardner. Donald Sinden is not given a whole lot to do, besides remain largely ignorant of what is transpiring around him.

So while overlong as a movie and often sometimes plodding, Mogambo is redeemed by the great cast and passionate approach. A glamorous adventure that is simple in story, but pretty excellent in execution with the best in the business being and in front of the camera.