Based on the play by Oscar Wilde, An Ideal Husband is a witty, delightful and well-acted period comedy surrounding a potential parliamentary scandal and those involved. Cracking dialogue and an excellent satirical look at society’s conventions, it whisks along at a brisk pace and keeps you entertained all the way.

The film is set in 1895 London. Sir Robert Chiltern is a respected rising star in parliament with a beautiful, devoted wife

Gertrude and the admiration of his colleagues. His seemingly perfect existence is shaken by the arrival of Mrs. Laura Cheveley; a manipulative women with knowledge of a past misdeed Robert committed that could bring his career into disrepute and threaten his marriage. Worried about the potential parliamentary ramifications and marital distrust, he calls upon his best friend Lord Arthur Goring; a notoriously idle philanderer who incurs his father’s wrath by the fact he is not married and has no interest for it. Goring agrees to help as he knows Laura Cheveley from years before, but finds that his proud bachelorhood may be under threat because of this and the fact that Chiltern’s sister, Mabel is head over heels in love with Arthur.Prepare for hysterical lines and witty insights into political life as Arthur attempts to help his friend whilst preserving his caddish demeanor and single living.

What immediately struck me about An Ideal Husband was the topicality of it, as in this era we have seen many political scandals and parliamentary shocks. This adds a certain modernity to the film despite it being a period piece, it could have taken place today and been just as fun. Yet the period setting helps with the witty satire of political scandal present in the Oscar Wilde play of the same n 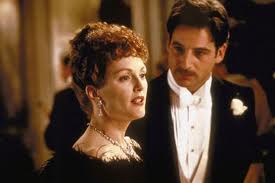 ame.Oliver Parker views the various machinations of polite society with a humorous edge, showing the audience the extent of scandal on society back then. The script further adds to the laughs as we witness both Robert and Arthur’s desperate attempts to evade the scheme of the vindictive Mrs. Cheveley and its potential effects on both of their personal lives. The adventurous score brims with mischievous glee as characters exchange barbed lines whilst remaining allegedly polite in high society.

The cast assembled shine with crackling dialogue and interesting characters. Rupert Everett steals the show as the philandering Arthur and breathes life into his character and his outlook on life. Also,watching him trying to retain bachelor status proves highly comic viewing. Jeremy Northam, in the pivotal role of the worrying Robert, portrays the best friend character with a lively and engaging performance. Julianne Moore is delightfully scheming and foxy as Laura, her character clearly knowing how to play people like a 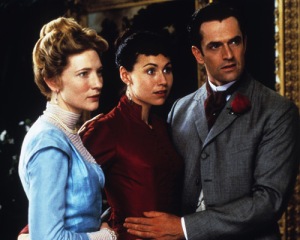 fiddle for her own personal gain. As the loving Gertrude, the versatile Cate Blanchett exudes a touching wistfulness as she comes to realise her husband isn’t as perfect as she originally thought in a finely judged performance. Rounding out the lovely ladies is Minnie Driver as the quick-witted and lovestruck Mabel. Her expressive face is ideally utilised to comic effect as we watch her many advances towards Arthur in the hope he will reciprocate her loving emotions. And not forgetting John Wood, who is a caustically witty presence as Arthur’s impatient and disapproving father.