At first glance, Houseboat appears to be the same old romantic comedy you’ve seen a million times. But in the hands of Melville Shavelson and benefiting from the star pairing of Cary Grant and Sophia Loren, it emerges as a delightful and warm romantic comedy drama. If this doesn’t put a smile on your face, I don’t know what will. 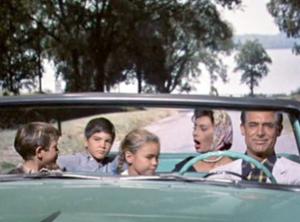 Tom Winters, a worker at the US State Department, has been estranged from his three young children and wife for many years. He returns from Europe to the news that his wife has died. Although his children; David, Robert and Elizabeth want to stay in the country with the wealthy Aunt Carolyn, Tom takes them to live with him in Washington DC. He finds assuming the position of being a real father a hard job as the children resent him for not being there for them. One day after attending a concert, young Robert runs away. He is later found by Cinzia Zaccardi, an Italian woman and daughter of a prominent conductor. She is trying to escape the cloistered world of her father’s touring and the people he surrounds himself with. Robert immediately takes a shine to Cinzia and she brings him home to Tom. After meeting his children, Cinzia has a positive effect on the youngsters, who insist she become their maid. She eventually agrees to this and Tom takes them to live in an old country house owned by Aunt Carolyn. Unfortunately the house is ruined when the driver, the wolfish Angelo, flirts a little too much with Cinzia and the moving house is wrecked by a train. Angelo, out of kindness, offers them his old houseboat, which is in need of repair to say the least. After moving in, we witness and Cinzia’s warm presence helps the children eventually come to terms with their long-absent father and how she eventually falls for her employer. So prepare for comical mishaps before the Tom and Cinzia realise their feelings for each other, reconciliations and how the presence of one person can influence a who 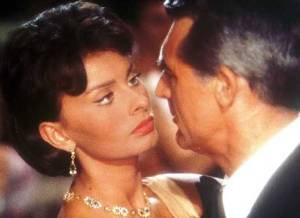 Although clichéd and a little sentimental, Houseboat still manages to entertain in a comical and touching way. Part of this is down to the script that presents the characters and the influence each has on the other, especially the children as they come around to the idea of Tom as their father. Melville Shavelson employs gorgeous Technicolor to highlight the brightening of lives and the kind of romantic feelings that only Old Hollywood can supply. The musical adds to the feelings of a growing relationship, especially when Cinzia and Tom dance and you can see as they gaze into each other’s eyes that they truly care for one another. The glamorous pairing of Cary Grant and Sophia also helps lift the film from the usual romantic comedy route. Their interactions and undeniable chemistry are especially palpable, as we s

ee them eventually warm to one another after searching for answers.

Cary Grant embodies the debonair personality of Tom, yet also lets us to glimpse his fear and eventual love of responsibility for his children. Sophia Loren provides vivacious beauty and kindness as Cinzia, but shows how this young woman will not back down from her opinions as Tom realises how much good she has done with his offspring. The child actors all provide pugnacious yet adorable performances as their lives are changed and they come to see the good in their father after missing him for so long. Charles Herbert is a particular stand out as the lonely, harmonica loving Robert, who begins to warm to his family as a result of Cinzia. Martha Hyer plays the small role of Aunt Carolyn, who has always carried a torch for Tom and tries to undermine the growing affection between him and the loving Cinzia. Stealing all of the scenes he is in is Harry Guardino as the strutting, skirt-chasing handyman Angelo. His scene when he is supposed to tak

e Cinzia dancing and he refuses because he feels she is a threat to his bachelor status is quite hysterical in its execution.

Warm, witty and cosy, Houseboat may be formulaic but when you’ve got chemistry like Grant and Loren, superb writing and stunning music, who really cares?