An adroit movie that really gets the brain working with its examination of images and a different picture of Swinging London, Blow-Up is a confounding puzzle that registers on many levels and calls for attention. This is largely down to the sense of mystery and intelligent probing that is present, especially from the masterful camera of Michelangelo Antonioni.

Thomas is a dismayed, cool and bored fashion photographer whose view of Swinging London is coloured with nihilism and gloominess.

He wishes to find something full of life to shoot, instead of the blank-faced and dead-eyed models he photographs on a daily basis. While his life is one of seeming glamour and everything you could ask for, the void of emptiness is becoming prominent and larger. Between fashion shoots, he photographs more realistic situations, such as men in the mines for a book he plans on publishing eventually. One day while in the park, searching for an image to complete his book, he happens across an intimate moment between an older man and a young, attractive girl. He snaps a few shots of them, before being harangued by the woman named Jane, who desperately wants the photos he has taken. When she comes to visit later on, he gives her the wrong film after she attempts to seduce him nervously as a way to acquire the photos. When he enlarges the photos he took in the park, upon closer inspection it appears that there is a man holding a gun and also a dead body in the background. Slowly, he becomes obsessed with what he may have captured on film and strangely comes to life again. The biggest question is has Thomas really discovered a murder? Or is it that he just wants something arresting to photograph and has fabricated this?

Michelangelo Antonioni is the master behind the camera who casts a deep spell on you with this ambiguous and provocative film. His depiction of life in the Swinging 60’s is anything but fun and games, instead heading in the direction of disillusionment and isolation. This is that sort of movie that will send your brain in multiple directions, thanks to the thematic value and layers of possibility that lie housed in it. The very essence of imagery and how accountable our eyes can be is fascinatingly brought to vivid life, leaving a good amount of room for uncertainty. The whole impact of Blow-Up takes in photography and vision well and also has something of an existential undercurrent that is evinced gradually. 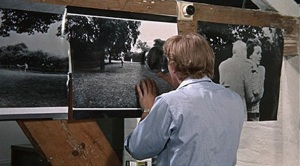 The ennui of Thomas’s life presents many interpretations regarding whether what he sees in the images is actually there or someone a thing he has projected himself. Yet like all the best film makers, Michelangelo Antonioni skilfully plays his cards close to his chest and leaves it up to the audience to question what is actually occurring. Anybody searching for clear answers and big reveals will not find them as Blow-Up is purposefully maddening and ambiguous, which is the biggest strength of the picture overall. The very fact that you can’t be quite sure if what Thomas captures is real or illusory is exciting yet deeply insightful at presenting an outsider’s perspective of the 60’s and how for some it wasn’t the bright time often depicted in media. Although it has colour aplenty scattered in various frames and the iconic fashions of the era( as well as liberated sexuality), Blow-Up is more concerned with showing the dissatisfaction with the world, especially in a time of change. Alienation seeps into Blow-Up, and it becomes understandable why Thomas would want something of life to photograph, which ironically comes when he thinks he’s uncovered a murder. There are so many parts to Blow-Up that really engage the mind and I am sure will be fascinating and provide more insight on other viewings. To some modern viewers, Blow-Up will seem meandering, but it’s deliberate pacing is in fact key to the film in capturing the boredom that the not always likable Thomas feels and how he springs to life when he believes he has discovered something. In the end, the whole mystery aspect of Blow-Up takes on a different tone with the feeling of not being able to trust what you see playing heavily on the uneasiness. The mod soundtrack strikes the counterbalance of action and liveliness with the feeling of being listless and something darker being under everything that is seen as fantastic at the time.

As the alienated and uncomfortable Thomas, David Hemmings is fantastic casting. He possesses a certain hollow-eyed melancholy and is sometimes hard to gauge, which figures in well as to whether or not the character is simply projecting his thoughts into reality. The character isn’t always the nicest or easiest person to relate to, but Hemmings grabs the attention with the listless angst becoming something bordering on possible madness as the movie progresses. 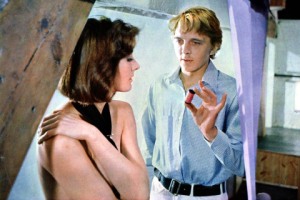 A young Vanessa Redgrave makes a mark in only a couple of scenes; portraying the attractive woman in the photographs. There is an awkwardness and fretfulness to her, mixed with a strange sexuality that only heightens the picture’s idea of reality and perception. Sarah Miles appears as the neighbour of Thomas, who he obviously likes but never acts upon it. Jane Birkin features in a small but memorable part of a giggling girl who with a friend has an interesting photo shoot with Thomas.

A strange and abstract film that is one that will imprint many images on the mind and call for many watches, Blow-Up is a provocative and unusual film which deconstructs many ideas and gets you to question the validity of what you see.