It may follow familiar beats and is more than a tad formulaic, but two compelling leads and some crackling suspense raise The Bone Collector to a good level of suspense to watch.

Lincoln Rhyme(Denzel Washington) was once a prominent forensics detective/expert who was highly respected in his field. That is until a tragic accident rendered him mostly paralysed. Only his face, brain and two fingers work and he has all but given up on life. Though he is looked after by live in nurse Thelma(Queen Latifah), Rhyme finds his existence exhausting because he can’t do what he once did . 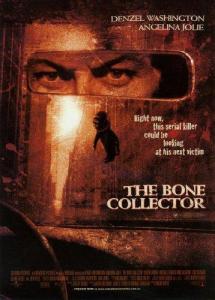 Owing to progressively worse seizures that he believes will render him in a vegetative state, he plans to end thing sin order to avoid that fate. Meanwhile, tough patrol cop Amelia Donaghy(Angelina Jolie) is going to be transferred to a desk job. But on her last day as a cop, she uncovers a mutilated body on the train tracks . Alongside the body is old fashioned items that are most puzzling at first. Thinking fast, stops the evidence being destroyed by halting an oncoming train by stopping it in the nick of time. Rhyme’s detective friend Paulie Sellitto (Ed O’Neill) enlists him on the case in question. Rhyme isn’t keen on taking the case, until he sees the clues and can’t help but get involved. After seeing Amelia’s skill at collecting evidence and seeing, asks for her to assist him in the case .  Not wanting to put in jeopardy her soon to be desk job, Amelia is apprehensive of taking on such a case. She reluctantly accepts and though they are not the most obvious partners in solving crime, after initial animosity , the two begin to work on this unusual case. The tough Amelia becomes Lincoln’s eyes and ears on the crime scene to track down the sadistic serial killer before he strikes again.

The particularly nasty killer enjoys toying with the detectives with his clues and taunting them if they are too late. Hindering the investigation is the interference of Captain Howard Cheney(Michael Rooker) , who is jealous of Rhyme and wants to laud over everyone that he’s the boss but is pretty inept at what he does. The case intensifies when another person is kidnapped by the taxi cab killer. It’s now up to the mismatched duo to stop the madman before it’s too late.

Phillip Noyce is a very good director who plays the film as a fast moving yet largely engaging thriller with creepy undertones. Though The Bone Collector is not going to go down as a truly masterful and iconic thriller, it does the job of keeping us involved with a level of skill that’s quite good and it’s certainly watchable thanks to a fast moving pace and some real jolts of horror . 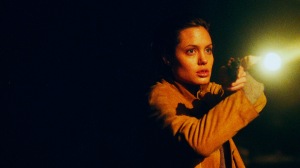 This film isn’t afraid to be grisly( one victim is brutally scalded to death with steam ), but gladly doesn’t get to a level of truly outrageous gratuitousness . The most common thing that is said about is that it is a poor man’s Seven . While I can understand this point of view as both feature ritualistic ,viciously methodical killers and an urban setting , I think  The Bone Collector also has differences. Plus, I don’t think many films in the thriller genre can replicate Seven and it’s spellbinding command over visuals and ambience. Saying that, The Bone Collector does have its share of good visual moments throughout, especially in the zooming aerial shots of New York and the creepy, unnerving darkness of the underground . The Bone Collector can often feel a bit run of the mill and near the end logic begins to strain , but the quick pace and jolts of suspense help raise it higher than what it is. Craig Armstrong contributes a mournful and atmospheric score that raises the hair on the back of your neck when it needs to.

Where The Bone Collector gains a lot of its good points is in the casting. The compelling presence of Denzel Washington is front and centre here. Washington exudes a commanding, intelligent and subtly emotional presence; displaying the frustration of man who has a mind that still works, but a body that doesn’t . All of this conveyed convincingly by the forever gifted Washington through often just body language and facial expression .

Which really says a lot considering he is bed ridden for practically the whole film. Aiding him with an equally fine performance is the striking Angelina Jolie. Portraying the outwardly tough and streetwise cop with buried trauma, Jolie is very effective at mingling the two sides of this to make a very watchable character. Jolie projects a haunted yet brave front here which is appealing and solid. The chemistry Jolie shares with Washington is very believable as they go from people who are seemingly opposites who then end up complimenting the other. A no nonsense Queen Latifah is appropriately warm yet steely in her performance as the live in nurse determined to make Rhyme see that life is worth living. Ed O’Neill is on likeable form as a good support to Rhyme and you buy into the fact that they trust each other implicitly. Michael Rooker, of intense stare and eyes, slimes his way across the screen as the police captain with a massive chip on his shoulder with anyone who crosses him . If it werent for the main killer of the film, Rooker and his character could easily be cited as the chief antagonist of the piece. Luis Guzman brings a little bit of humour as a fellow forensic who often lightens the often intense and foreboding mood.

So while it’s not a truly top tier thriller , The Bone Collector is still a creepy movie that takes a standard story and raises it up a few notches to entertaining and fast moving stuff. Plus, when you have stars like Denzel Washington and Angelina Jolie in the film and doing a commendable job, it’s definitely worth watching in my book