A beautifully moving paen to poetry and altering friendship, Il Postino weaves a quiet yet lyrical spell on you as we watch a shy man flourish under the tutelage of a great poet. A subtle and at times amusing film, Il Postino also has a bittersweet nature that is hard to forget once you’ve seen it.

The year is 1950 and Mario Ruoppolo lives on an Italian island, where the main job for men is fishing. 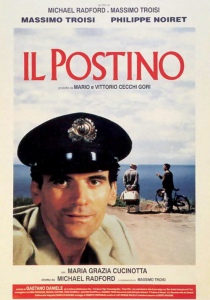 Trouble is, the good-natured and simple Mario hates fishing, so is left to laze about with nothing to do and his father telling him he needs to find a job. This is all subject to change with some exciting news for the island. The very famous poet Pablo Neruda has been exiled from Chile for his political views and is now seeking refuge on the island. As there is a huge influx of mail, a postman is needed to deliver it to the esteemed visitor. Listless Mario gets the job as postman delivering the hoards of mail that arrive for the renowned poet. Mario sets about on this job and while doing it, attempts to converse with Neruda, who is the talk of the town. Neruda is polite enough but aloof as he wants to be in solitude, which Mario doesn’t realise at first. Gradually his enthusiasm and pluck resonate with the old master, who begins to like the innocent postman. A friendship between the two very different men( one an eloquent poet, the other an uneducated postman) is ultimately struck up. Neruda tells Mario of the importance and beauty of words, which Mario takes on board and stores. Around this time, timid Mario finds himself falling in love with the stunning Beatrice, a local barmaid. The trouble is, he can hardly put a sentence together whenever he’s around her. Seeing that Neruda has an excellent reputation with women, Mario implores him for support. Neruda and his mellifluous gift for words encourages Mario to emerge from his shell and give voice to his feelings day by day. As a result, Mario starts to grow in confidence under the guidance of Neruda, and soon enough, his love for the beautiful Beatrice can finally be expressed without him looking like a fool. Over the course of the time spent together by Mario and Neruda, they each make a defining impression on the other that neither will forget.

Michael Radford, a British film maker, directs this Italian language film with a sure hand and buoyant charm that is hard to resist. 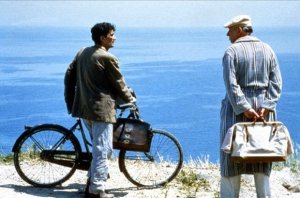 It’s the simplicity and little moments that cause Il Postino to really make its presence felt. It isn’t a film of big, grand moments; favouring a quiet and languid time for the relationships between characters to manifest and ensue. The interactions between the good-hearted but and stately Neruda are what really interests and pleasingly transfer to the viewer’s enjoyment of watching them come to an understanding that benefits both in ways they didn’t realise. A lot of may be about Mario’s attempts to woo Beatrice which are tentatively done, but his burgeoning friendship with Neruda is the real ace in the hole.  An observant quality frames the impact each man has on the other, with the power of descriptive words passed from Neruda to his young charge eliciting a gentleness and occasional humour. In fact, humour plays a decent part of Il Postino, especially in how Mario woos Beatrice and her stern Aunt misinterprets the whole thing. Yet within the film is a reflective note that can’t be missed. There is a scene later on in Il Postino that is imbued with a relatable pathos and inspiration. In it, Mario finally begins to realise that he is something special and while Neruda has left the island, he comes to see just how much he was impacted by the great man and how he has been changed substantially from when we first saw him.

Such a heartfelt and inspiring scene that feels so warm and soulful, it’s just glorious to see. There is a definite tinge of poignancy that comes in the film when Neruda leaves after the warrant for his arrest is scrapped, leaving Mario feeling a bit lost without his mentor. And while there are those who will scoff at the movie and declare that not a lot happens, they are the missing the life-affirming and unobtrusive way that quite a lot happens, just in measured and lovingly rendered vignettes. Il Postino doesn’t need to be grandly over the top of melodramatic all the time; a winning relaxed approach is the right one for such a movie as this. The sun dappled imagery of the Italian island is blissfully gorgeous to look at, complimented by the moving and adventurous score to the piece.

Massimo Troisi is the eponymous postman in what would sadly be his final role. 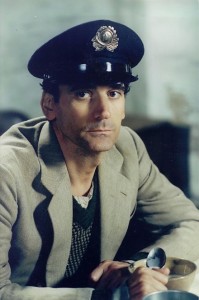 Essaying the awkward mannerisms, pining, childlike eyes and hapless charm of the transforming Mario; is excellently understated and soulful as the beating heart of the film that evolves with nuance from simple-minded and listless man to passionate and inspired person . Most of the bittersweet nature of Il Postino comes from Troisi , who tragically died a day after filming completed. He had a heart condition and postponed surgery to be in the film. Despite struggling, he soldiered through making this film( he had a co-screenwriting credit too), only to sadly not see the greatness of it all coming together. Watching his beautifully emotive and amusing performance is both a treat and a sad reminder of the talented man. Philippe Noiret is just right as the influential Pablo Neruda; brimming with humour, dignity and a thoughtful way about him. It’s easy to see why Mario looks up to the guy. There’s an authoritative and spirited streak that runs through the work of Philippe Noiret , making Neruda a man you could see yourself trusting and learning from. At first he prefers the quiet of being alone, but is won over by Mario and finds himself growing very fond of the man who he can help. Maria Grazia Cucinotta stars as the object of Mario’s affection and while not the most demanding role, her sensual appeal is employed well, that it is easy to see why Mario would become some enchanted by her. Cucinotta possesses a smouldering beauty that seduces the camera whenever she appears.

A sweet yet poignant movie of easy yet invested direction and nice performances, Il Postino splendidly captures the feeling of growing and being inspired lovingly and with a deep heart. As a showcase for the late Massimo Troisi, it ensures his presence and talents are in full glory and act as a touching reminder of his ability. Truly a sweet movie for everyone and one to be treasured.