Based on the true story of strip club workers scamming their clientele in efforts to make ends meet and sock it to the man, Hustlers is a colourful and surprisingly involving drama that makes time for comment on the strength of women and a sprinkling of humour. Also watch out for the talented cast, in particular a never better Jennifer Lopez.

It’s 2007 in New York, Dorothy(Constance Wu) is a young woman trying to make ends meet and help care for her ailing Grandmother. 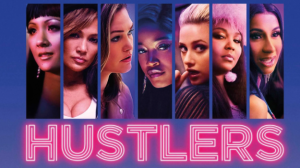 She’s working at a strip club, but not at all succeeding at making substantial money. Then she glimpses Ramona Vega( Jennifer Lopez), who is the resident queen bee that entices all with her sexy moves and charms. The two get talking and Ramona takes the inexperienced Dorothy under her wing and teaches her a thing or two. Dorothy soon goes by the name Destiny in the club and with Ramona’s guidance, starts to succeed. There’s a certain level of sisterhood between them that grows. Then the 2008 financial crash hits and things go south. Destiny discovers she’s pregnant and with business at the club running low and her boyfriend leaving her, she’s pretty desperate. The stripping business is not what it was and after meeting with Ramona( who she hasn’t seen in a long time), a plan begins to form. They will, along with other strippers that they know, make themselves available to men who are typically brokers or CEO’s on Wall Street , drug them and max out their credit cards. Although extremely dangerous, both women dive headfirst into this scam. Joining them are newbie strippers Mercedes and Annabelle( Keke Palmer and Lili Reinhart) who prove equally as adept at it. As the money rolls in things look good for the ladies, but soon greed begins to set in and events spin out of control for the merry band of women.

Lorene Scafaria is clearly a director who knows her craft and how to make a movie that entertains as well as invest you with its characters.

Writing the script as well, she doesn’t condemn or condone what the women do and doesn’t exploit them endlessly in leering fashion either. Instead, Hustlers finds its footing presenting them as women pushed too far and hustling to survive in a cruel world that doesn’t reward the honest. Morality is a slippery slope after all and Hustlers presents that in fantastic fashion. In terms of highlights, watch out for Ramona’s sultry and commanding entrance which lets you know everything you need to about her without dialogue; it’s a standout sequence thats the definition of memorable. Scafaria references the work of the masterful Martin Scorsese in terms of bright visuals, montage and themes, with the good, flashy life of money and power slipping into chaos as things turn sour. places you right inside this world that the ladies are part of and pulls pulls you into their stories and reasons for taking part in a hustle. The world that they populate is best summed up by Ramona; who groups customers into ranks of how devious they are and how much money each is worth. Ramona is a pro at surveying people and a lot of the information we learn is through Destiny reiterating the words of this charismatic mentor. 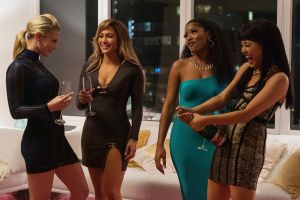 The framing device of Destiny/Dorothy revealing the details of the scams to a journalist played by Julia Stiles, who will write about it in the present, is cleverly employed and never too intrusive as to take us out of the film. A bit of repetition at the midway point can be pardoned for how the overall package is slick, thrilling and surprisingly evocative of the struggles women face and what happens when they take dangerous action. Mark my words, Lorene Scafaria is a director to watch out for in the future. While very much a drama, a liberal helping of humour abounds in Hustlers and is most welcome. Of particular note is the whip smart writing that allows for commentary on women taking control after being objectified and believably creating a camaraderie among the crew that feels very authentic. A killer soundtrack with some unexpected but fitting songs is a significant part of greatness in Hustlers and helps excel the narrative as it twists and turns.

Constance Wu heads the cast and is marvellous. Her curious face is our guide into Hustlers as she goes from downtrodden, vulnerable girl to successful woman, yet still retains a questioning backbone over her actions. She’s the audience surrogate but that is by no means a bad thing at all as Wu is simply stunning with both the humour and the drama. You truly feel for her too because of how convincing Wu is. What you’ve heard about Jennifer Lopez and her work in Hustlers is all true. 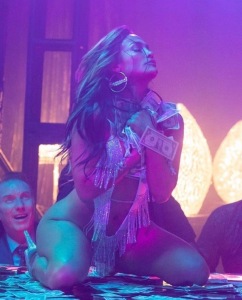 Fierce, beguiling, bewitching and ruthless( but not without humility or compassion), Jennifer Lopez turns in career best work that reminds us what an actress she can be. Too often in the movies, she’s been in material that doesn’t show off her range( save for Selena and Out of Sight). Thankfully that’s been rewritten in Hustlers; she’s truly allowed to let her charisma and presence shine with alacrity, along with nuance and physicality. Trust me, Lopez is at the top of her game here and is worth every ounce of acclaim. She’s the main showstopper here and don’t forget it. Keke Palmer and Lili Reinhart both contribute plenty of energy and humour as the new girls on the block; both are given time to shine and develop their characters with humour and life. We have Julia Stiles as the journalist listening to the outrageous and audacious story and she displays a great amount of vacillating from feeling enthralled to being shocked at what she hears. She’s another pair of outsider eyes and ears in Hustlers and an effective pair too. Cameos from Cardi B and Lizzo are fun whenever they are present. I very much enjoyed the small but memorable role of Mercedes Ruehl. I found she injected great warmth and wisdom into her mother of the den part and I was entertained by her appearance here.

Stylish, highly entertaining but also insightful and filled with an array of talented actresses and director, Hustlers is one excellent and very surprising movie.