It may have been savaged by critics upon release who saw it as nothing but a tawdry movie, but over time it is good to see that 9 1/2 Weeks has been reassessed and given a second chance. A film that touches on how addictive a union with someone can be and how it can push you over the edge, 9 1/2 Weeks masterfully casts a strange spell.

Elizabeth is an art gallery assistant who hasn’t been on a date or had a relationship since her divorce; a fact her friends seem to always remind her of.

One day while out shopping, her eyes meet with suave Wall Street broker John and an immediate fire is lit. She sees him as mysterious and he slowly gains her trust, despite being a stranger, by whisking her off her feet with romantic gestures. From the start of the intense relationship, John’s preference to take charge when it comes to sex hints at the danger he’ll bring to Elizabeth, but she sees him as loving and exciting. As the union becomes bolder and the sexual games get more perverse, Elizabeth finds herself completely obsessed by John but wanting to escape his clutches. Something within her won’t let him go and as John begins to take charge of everything, she heads down a downward spiral due to John’s hypnotizing influence that threatens to engulf her if she doesn’t break free.

Lyne knows exactly how to bring erotic fire to proceedings, but as time goes by bring forth the disturbing nature of John’s dominance over Elizabeth. It must be said that while many of the scenes are graphic in terms of sexual content( for instance John using the contents of a fridge and feeding Elizabeth for satisfaction), everything takes on a different tone once John reveals his desire to be the one in control. You can feel a palpable danger growing within the film as Elizabeth becomes completely obsessed with the suave but menacing John and goes almost past the point of telling what is right and wrong, heading straight for disaster. I think critics at the time might have missed this sense of disturbing atmosphere by instead focusing on the sex scenes. Yes 9 1/2 Weeks has a lot of sex that at the start is sensual, but takes a darker turn as the relationship takes a different turn.

Upon closer inspection, 9 1/2 Weeks paints a dark picture of brutal obsession and carnal desire that puts us in the shoes of Elizabeth, who knows something isn’t right but can’t walk away from the relationship that she has succumbed to. Now the movie isn’t flawless by any means; it runs a bit too long and some of the dialogue is a bit tin-eared. But even with these flaws, the film captures the attention as an unusual parable about not getting swept into something you may not be able to get out of. A well-chosen soundtrack of songs about passion and dark intensity fits 9 1/2 Weeks like a glove and furthers the heightened feelings of looming darkness that can be found in the encounters between John and Elizabeth.

A film such as 9 1/2 Weeks is can be made or broken by the casting of the leads, thankfully the two leads put it in the former category. Kim Basinger is utterly believable as the spellbound Elizabeth; presenting her as passionate yet slowly seeing the dangerous ruin the relationship could bring as she heads towards mental breakdown. We feel for the character and a lot of that is down to the excellent work from Kim Basinger.

Mickey Rourke is just as good as the suave and very dangerous John, who ensnares Elizabeth in his perverse games of sexual pleasure. The best way I can think of to describe Mickey Rourke’s performance is similar to the snake in the Garden of Eden; he knows exactly what to say to be cunning and lure Basinger’s Eve like character in. Both leads have good chemistry, though it has an underlying darkness not often present with most movie couple’s chemistry and this sets it apart from many other movies.

A twisting neo-noir that alludes to the works of Hitchcock, Final Analysis is a good enough thriller that although derivative and more than a little flawed manages to keep the attention with glossy style and cast.

Isaac Barr is a dedicated psychiatrist in San Francisco who is treating a strange patient by the name of Diana Baylor.

The unusual young woman is plagued by traumatic dreams that seem to stem from her childhood, but every time Isaac gets close to getting to the bottom of it, Diana somehow switches off and refuses to talk. Wanting to get to the root of Diana’s case, Isaac contacts her older sister Heather in the hopes of possibly discovering something. What Isaac gets is something he least expected. The gorgeous Heather captures his attention immediately and he feels for her because she is locked in a loveless marriage with Jimmy Evans, a hotheaded gangster who controls her every moved and exercises complete domination over her.

Soon enough, Isaac and Heather have entered into a steamy affair after the stunning Heather secures him, despite the implications of him going against medical ethics. Yet while their affair is dangerous, there is also the matter of a strange condition that Heather suffers from. If she consumes even a tiny bit of alcohol, she flies into a violent and uncontrollable rage after which she can’t recall any of her actions. Events for the unsuspecting Isaac get more complicated when the vicious Jimmy is killed by Heather during what appears to be one of her violent episodes. Put on trial for murder, Isaac acts as a help to her because of his desire for her and tries to aid her in getting off through his friendship with her defence attorney Mike O’Brien. Yet as the case begins to open, several things begin to test Isaac’s faith in Heather as he starts to suspect she may not be the vulnerable and abused woman she appears to be. Mystery and deception meet as Isaac digs into the twisting case that is not what it seems on the surface.

As aforementioned, Final Analysis owes a lot to the movies of the masterful Alfred Hitchcock. And while it can be neat counting the references to his work, especially Vertigo, it can grow a bit bothersome as it is a film that is never going to be put in the same category as his work. 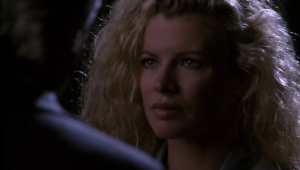 Regardless of that, director Phil Joanou keeps things very stylish and moving along nicely, and it’s not hard to see that he knows how to frame an enticing shot for this neo noir. Good examples of these skills are the opening credits that provide vignettes of what is to come being illuminated by a searching fog light, a tight close up of the haunted Diana recounting her dream and later a stormy climax at a rickety lighthouse. Derivative as Final Analysis may be, it still is sure as hell an entertaining mystery.

The writing is good for the most part, yet while it builds a sense of unease in the beginning, it starts to squander it in the middle by revealing a bit too much information and throwing in some very incomprehensible twists. Thankfully, the tense climax makes up for the floundering middle half with panache and thrills. A string heavy score delightfully recalls the work of Hitchcock regular Bernard Herrmann with its romantic undertones and sense of passionate danger.

Richard Gere is very good as the unsuspecting Isaac, whose confidence in his beliefs and love for Heather are sorely tested as the case opens up. Gere successfully makes Isaac a character who finds himself caught in a web and tries to navigate his way out, only to uncover more deception. The beautiful and talented Kim Basinger sizzles as the mysterious Heather, who is by turns sad, beguiling and extremely seductive. Basinger brings energy to the part as we like Isaac, begin to witness how the afraid surface she projects may in fact hide something a lot more deadly.

A young Uma Thurman projects a haunted and almost ghostly quality to the role of the traumatised Diana, who may know more than she is letting on as the web of deceit intensifies. Eric Roberts may only be on screen for a short amount of time, but when he’s there he exudes an animalistic intensity and thuggish demeanor as Heather’s ultimately ill-fated husband. Paul Guilfoyle is very amusing as Isaac’s best friend and lawyer who showcases humour during the trial.

Flawed but still very entertaining, Final Analysis has enough visual flourishes and contributions from a game cast to make it watchable. It may not be going down as the best thriller out there, but it is still well done and effectively directed by Phil Joanou.

Based on the novel by James Ellroy and boasting an excellent ensemble cast, L.A. Confidential takes the viewer on an intr

icate journey into the 50’s, exposing corruption and murder beneath the veneer of glamour and bright lights along the way. Director Curtis Hanson has fashioned an elegant, brutal and thoroughly convincing neo noir that grips you with its labyrinthine plot, excellent jazz score and perfect feel for the time.

The main focus of the film is three members of the Los Angeles Police Department; suave and confident Jack Vincennes who enjoys the limelight in Hollywood, Bud White, whose violent and hot-headed antics often clash with others and intelligent upstart Ed Exley, who does everything by the book and longs to be just as good as his late father. The paths of the three men first cross at a Christmas Party, in which prisoners and police begin brawling in the cells and the paparazzi have a field day with the story, dubbing it “Bloody Christmas”. After a massacre at a restaurant named the Nite Owl, in which one of the men’s fellow officers is killed, the men are drawn together again in order to solve the case.This case leads them through many twists and turns involving corruption within the police force, the scandal loving magazine “Hush Hush”, a prostitution ring in which the women are made to resemble movie stars, drug dealing and long-buried secrets.

The pacing of the film is magnificent, slowly revealing and concealing things to keep the viewer guessing what will happen next. The cast assembled add immeasurable impact to the story as it gradually unravels before us. Spacey is excellent as the limelight loving Jack, adding humour and impact in his scenes. Guy Pearce is well-suited to his part of the determined Exley, who is driven to succeed whilst being ostracized by his peers. Russell Crowe makes an indelible mark as the violent and troubled Bud, getting under the skin of him and revealing a rarely shown sensitive side to his character. As a prostitute who is the spitting image of Veronica Lake and caught up in the ongoing investigation, Oscar-winning Kim Basinger adds both glamour and poignancy, especially as she and Bud begin to develop feeling for each other whilst he is working on the dangerous case.

Aided by stunning cinematography and an evocative jazz score, Los Angeles almost becomes another character within the film.It becomes  a hot bed of Hollywood high glamour, scandal loving people and deception round every corner. The humorous and barbed opening narration by Danny DeVito’s dirt loving tabloid journalist, in which footage from old movies and grainy paper headlines about drugs and illegal activities is shown while he speaks, clearly sums up this dichotomy of the place.

If you’re looking for a crime film with a noir sensibility and more twists than a winding serpent, then look no further than L.A. Confidential. Trust me you can’t go wrong with this excellent film.