A thoroughly charming romantic comedy drama about the joys of reading, friendships and the ups and downs of love, The Jane Austen Book Club may be predictable but it is so lovely, funny and given heart by a talented cast that it more than makes up for the feeling that you’ve seen something similar.

In California, the eponymous book club is set up by the lively and loving Bernadette, who is something of an authority on the works of Jane Austen. 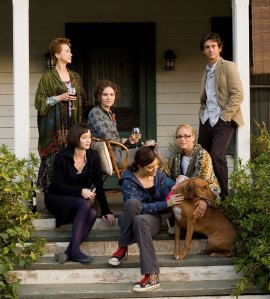 Part of the inspiration comes from meeting Prudie, an unhappy and prim French teacher who is married to Dean, a man who seems to busy with his work and other ventures such as watching basketball to pay her any attention. Prudie is also somewhat enchanted by one of her handsome students Trey. The other half of the inspiration comes in the form of good friend Sylvia, who is currently in the process of separating from her philandering husband Daniel after he admits to having an affair. Also joining the club is dog breeder Jocelyn, who has never really been in love, Sylvia’s adventurous lesbian daughter Allegra who delights in daring stunts and seems to always get injured in the process. And not forgetting the one man of the bunch, science fiction geek Grigg, who is brought in by matchmaker Jocelyn tries to set up with a broken-hearted Sylvia. The amusing thing is that Jocelyn tries to force Grigg on Sylvia without realising that he actually likes her, though it’s obvious to everyone else where the affections of Grigg lie. Over six months, they will read the six books by the legendary Jane Austen and meet to discuss them with one another. 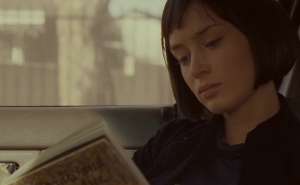 As the reading of these classic books continues, each member’s life begins to resemble many of the aspects contained within the books. Romance, repair and camaraderie ensue within the group as they all become more enlightened on love through the reading of literature.

Writer-director Robin Swicord does a very successful job at bringing these characters and their stories to life. In her writing, she really has a knack for showing us the changes they make both in terms of funny moments and touching ones. Swicord just knows how to bring them to life and make a fairly predictable and none too new story seem very interesting and filled with warmth. 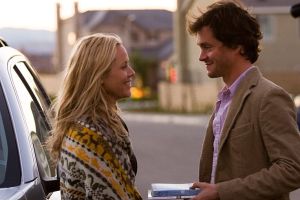 Wit, romance and friendship all feature heavily throughout this movie and by the end it does you make you feel very cosy. Now it must be said that sometimes the pacing is a bit off within The Jane Austen Book Club, but there are enough distractions to settle this flaw. Mainly, there is the examination of how Austen’s work still rings true today that keeps events ticking over nicely. It seems that even after all these years, Jane Austen’s witty look at relationships and romance is still just as fresh and keen as ever, as the six members navigate their way through life and love, while finding their lives somewhat mirror the characters that populate the work of Austen. A well-chosen soundtrack compliments the tone of finding love and discovery within the movie very well.

A finely assembled cast adds up to a wonderful ensemble film where the characters are given time to grow. As the mind behind the book club Bernadette, Kathy Baker is delightfully warm-hearted, bohemian and matriarchal in every sense of the word. 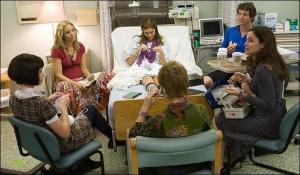 Maria Bello is natural and good-hearted as Jocelyn, who begins to play matchmaker much like the character of Emma, yet doesn’t realise that love is staring her right in the face. The talented Emily Blunt manages to blend poignancy with a sharp brittle quality as the unhappy Prudie. The character could have easily been extremely unlikable, but in the hands of Blunt, we at least see why Prudie acts the way she does to others and that she just needs an outlet for her feelings that she finds in the book club. Amy Brenneman is sympathetic as Sylvia, who doesn’t know how to react to her husband’s cheating but later regains her confidence. A youthful humour along with the impassioned way of throwing herself into love is provided by Maggie Grace, who resembles the character of Marianne in Sense and Sensibility. While the women of the story are the main focus, the men also get a look in, especially in the case of Hugh Dancy, who plays the sole male member of the book club. Exuding affability and geeky tendencies, it’s hard not to like Dancy in this movie because of his energy and spirit. The other guys in the movie(Jimmy Smits, Marc Blucas and Kevin Zegers) have smaller roles but still have things to do and a great cameo from Lynn Redgrave as Prudie’s pot-smoking hippie mother is really funny.

A cosy, warm-hearted film full of humour and pathos, The Jane Austen Book Club is far from original but filled with life and verve that is enjoyable nonetheless.