Fear in the Night

A creepy psychological entry into the realms of Hammer Horror comes Fear in the Night, a neatly constructed and suspenseful piece of sinister horror and rising menace. It may not rank as high as other movies from the studio, but it certainly gives off a creepy atmosphere and good performances that are hard to shake off.

Peggy Heller is a young woman who has recently married her teacher husband Robert after a short courtship. A few months prior to the marriage, Peggy suffered a nervous breakdown of which she is now recovering from. 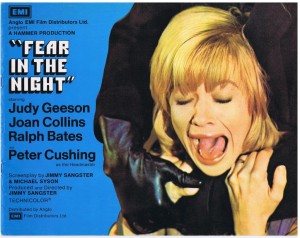 Her recovery is disturbed after she is attacked by an unknown assailant with a prosthetic arm. Although Peggy believes the attack on her was real, everyone around her believes her fragile mental state is to blame for it. Robert invites Peggy to stay in a cottage on the grounds of the school he works for. The old building is empty as the children have gone home for half term. After meeting the mysterious headmaster Michael Carmichael, who has a habit of appearing out of nowhere and his vindictively bitchy wife Molly, Peggy is again attacked by the unknown assailant. This plunges Peggy into a terrifying search for the truth in the ominous building and suspect individuals that occupy it as more creepy events begin to occur. Is all of this in Peggy’s mind? Or does she really need to be worried about her safety in the school? As the tension rises, will Peggy be able to figure out the mysterious events before it’s too late?

One thing to praise in Fear in the Night is the way it keeps you guessing for a long time. We are made to doubt our suspicions of characters because of conflicting stories and this quality makes the film very creepy indeed. One minute we’re suspecting one character, the next it’s completely turned on its head. Jimmy Sangster adds the spooky atmosphere to the film and the constant shift in suspicions by cutting scenes very close together, so it appears that they are all linked in the most sinister way. Sometimes this style may over complicated things, but he admirably keeps it in line for the majority of the picture and keeps us guessing what strange events are occurring around the terrified Peggy. Relying on sound and atmosphere, Sangster makes sure Fear in the Night is psychological if nothing else. The music for the film is an eerie mix of creeping rhythms and sudden jolts of terror that really envelop the film in a twisted glee.

Judy Geeson makes an impact as the vulnerable and childlike Peggy, capturing how her already precarious hold on events begins to crumble as she becomes more terrified by her surroundings and the repeated attacks on her by someone who no one has seen. Ralph Bates is suitably enigmatic as Robert, we are never sure whether he knows more than he is letting on or not. The sultry Joan Collins is feisty and devilishly bitchy as the headmaster’s wife, whose cutting remarks and seductive appearance begin to threaten Peggy. Although only playing a brief part, Peter Cushing cuts an imposing figure as the headmaster who seems to be around when creepy events happen.

It may not be up there with the greats of Hammer Horror, but Fear in the Night is a neat little horror flick with just enough atmosphere to keep you interested for an hour or so. Plus, it makes for creepy viewing with Halloween just around the corner.