A very unnerving and underrated psychological horror film, Session 9 knows how to chill the audience and craft a compelling story populated by flawed yet fascinating characters.

Gordon Fleming( Peter Mullan) is the owner of an asbestos removal company who is having a rough time of things. He’s recently become a father but doesn’t seem entirely thrilled at this and his relationship with his wife seems more than a little strained. In a desperate need for money to support himself as he starts to become a bit unglued in life, he takes on the job of cleaning out a now uninhabited former mental asylum.

Gordon, who is known for his cool efficiency, promises to complete the vast job in just a week. This is despite the fact that the job is actually one that should take a number of weeks. He brings along good friend and resident intense bossy boots Phil,( David Caruso), nasty mouthed and greedy Hank, knowledgable law school drop out Mike (Stephen Gevedon) and Gordon’s green nephew Jeff( Brendan Sexton III) , who has a fear of the dark. Each of them is wrestling with something( a big bone of contention is the fact that Phil’s ex girlfriend is now with the cocky Hank) but decide to just get the job done as quickly as possibly. Unfortunately, that isn’t going to happen as something sinister takes over the asylum As the week goes on, tensions begin to rise between the men as the former asylum begins to take a dangerous hold over them. Gordon in particular comes under immense anguish as his already tenuous situation and anxieties manifest, along with the rest of the crew. In parallel, Mike discovers an old room in the vast building that house cassette tapes of psychiatric evaluations with a former patient named Mary Hobbes. We hear that she has multiple personalities and that something horrifying happened years ago. Mike becomes obsessed with listening to the nine tapes that slowly peel back the horror of the asylum. As we witness the fraying of relationships, darkness and all manner of horror descend on the feuding group and puts them in grave danger, in particular a close to breaking point Gordon.

Brad Anderson is fantastic in the directors chair; he clearly knows how to unsettle without being too in your face and his focus on character development is to be admired. His skills in forming a mystery that takes you along with it while scaring you in sophisticated ways is to be praised too.

The running discovery of psychiatric session tapes that bleed into the present and often accompany shots of the crew are mesmerising and keep you glued. Session 9 is a horror movie that has only a couple of grisly moments; Anderson instead discovers fear and shock through the unexplained and mystery surrounding events in true psychological horror style. As I’ve often said in regards to effective horror, you don’t need gallons of blood to scare an audience, just an eerie idea executed to a great level of suspense can do it. And Session 9 more than does that with its chills getting more intense as things progress.

It’s in the characters, atmosphere and script that Session 9 derives it’s scares with its delving into psychological animosity between the men and how they unravel my a gradually more terrifying series of events. The seething anger, resentments and bruised egos all come through as these men struggle to accept their vulnerable state by using bravado but failing to fully comprehend the horror ahead. An intriguing comparison can be made between the toxic nature of their job in cleaning asbestos and the toxic masculinity that they each exhibit in one form or another. The use of titles to signify the week going along  And one can’t speak of Session 9 without mentioning its location which is in actual fact a real life mental asylum by the name of Danvers State Mental Hospital that is not in use but nonetheless adds to the creepy dimension of the piece. It’s large, looming stature and the effective way that a lot of it is shot in the daytime to further emphasise uneasiness.

As the bright light streams through the old windows, it feels very chilling and a reverse of the usual all bad things happen in the dark adage. Granted, scary things do happen in the dark in Session 9( watch as poor Jeff who has a fear of the dark has to run for his life , but the overall consistency of the ambience in daylight really does amazing things for this movie. And it really gets you thinking once you know that the location is in fact a real place where unspeakable things in less enlightened times happened and digs deep under the skin of the viewer. The dissonant, mood-setting score aids the spooky and deeply creepy exercise in terror with the fleeting of a piano and ominous punctuation highlighting the creep actor and raising it considerably.

The relatively small cast is exceptional at displaying the slowly unravelling minds of the characters. Peter Mullan is the big standout with an immensely convincing and harrowing performance as a man on the edge.

Mullan possesses a face that speaks volumes about life and experience and that perfectly suits the role of Gordon. You can practically feel his world starting to fall apart and his futile attempts to prove he’s strong shattering as darkness descends on him. It’s a truly excellent piece of acting from the ever dependable Mullan. David Caruso also is memorable as the second in command who bristles with belligerence and a sense of entitled authority. He’s often at odds with the other characters which adds even more to the drama in Session 9. Josh Lucas relishes playing the cocky and sneaky worker who can’t resist rubbing up people the wrong way, while having a get out plan when times get tough. Stephen Gevedon, who is a co-writer along with Brad Anderson, imbues his role with smarts and deep curiosity, while Brendan Sexton III portrays the most inexperienced member of the group with a childlike want to please and be part of something that eventually becomes toxic.

Very spooky and deeply unsettling, with a great emphasis on characters, Session 9 is an underrated psychological horror you simply must watch.

As well trodden and predictable the story may become, An Unfinished Life gains points and clarity from the uniformly excellent cast and depth from direction that give it something extra. This movie was quickly dismissed upon release, but although more than a little formulaic, it is worth a watch for emotion and heart.

Einar Gilkyson is a Wyoming rancher whose business has gone downhill ever since he lost his son in a car accident and he ended up hitting the bottle. He still has some work to do, but these experiences have made him shut off and become bitter. 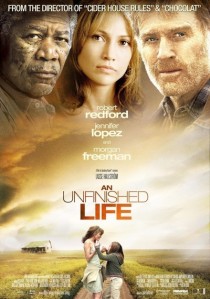 Living with Einar is his best friend and former rancher Mitch, who a year prior was mauled by a bear and has still not fully recovered from his deep wounds that have left him with difficulty walking. Einar takes care of Mitch, yet when it comes to everything else he is gruff and distant. The two live their lives on the ranch with differing perspectives; Einar is angry at the death of his son and has never really dealt with it properly, while Mitch is genial and with regards to his encounter with the bear has moved on and is trying to live what is left of his life happy. Things change when Einar’s daughter in law Jean arrives with her daughter Griff, that Einar had no idea existed. There is bad blood between Einar and Jean as Einar blames Jean for surviving the accident that claimed his son, whilst Jean has tried to remain strong but has now fled from her abusive latest boyfriend Gary.

Needing a place to stay, Einar reluctantly allows them to live with him. Although awkward at first, through the kindness of Mitch towards Griff, Jean’s numerous tries to reconcile and the little Griff’s attempts to break through to Einar, wounds that have festered begin to wane between Jean and Einar as they finally have to confront their fears and grief. Einar soon begins to open up more, but danger could very well be on the horizon with the bear that mauled Mitch back and the psychopathic Gary looking for Jean.

Now while some of his directorial flourishes go a bit mawkish, Lasse Hallstrom at least invests An Unfinished Life with a moving centre, offset by the occasional bit of humour as the souls of the character slowly heal. I liked the sense of immediacy and closeness that Hallstrom gave the film and the brisk pace he employed, that let events unfold with a quickness that never gets rushed. 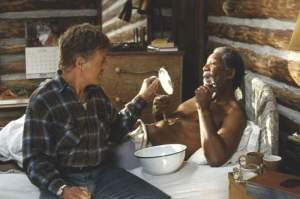 It must be said that a lot of the story is nothing particular groundbreaking in terms of drama and more than a little it can get a bit overly sentimental and the script gets clunky. Yet somehow the film works and while not particularly original, it tells the story in an efficient way that doesn’t squander any of the emotions within it. This story is of healing and learning to let go and its observations of these key themes is well orchestrated and directed. There are some lovely bits of scenery to be found too, with the trees and winding roads of rural Wyoming being lushly photographed and lensed with skilled assurance. A country influenced score charts the gradual emergence of Einar coming into a sense of acceptance and brings a wealth of emotion to An Unfinished Life.

A talented cast brings a poignant sense of emotion, soaring above the sometimes formulaic story. Robert Redford reveals a gruff and cantankerous exterior for Einar as someone who doesn’t want to open up but really should. There’s a sadness to Redford’s delivery that is clouded with anger and the actor really shows off his talent here as Einar is forced to finally comes to terms with the events that he couldn’t deal with before. Morgan Freeman is dignity and quiet strength personified playing the injured Mitch, who refuses to let pain get in his way of being positive and supporting Einar. With gravitas and an amiable smile, Freeman is reliably brilliant in this touching role. 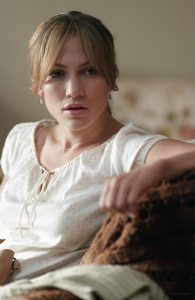 Jennifer Lopez is natural and stoic as Jean, who is both afraid and determined to remain strong and find some common ground with Einar. It is her role that forces the shift from Einar’s grief to recovery and Lopez plays it very well. Josh Lucas is the weakest of the cast as he is saddled with the rather uninteresting role of the sheriff who takes a liking to Jean. The role is one that doesn’t give him a lot to work with and it suffers from a lack of scope. The young Becca Gardner has the right amounts of charm and resonance for the part of Griff, who wears down her grandfather’s tough shell and lets him live again. And exuding menace and relish for possession is Damian Lewis, as the controlling and abusive ex boyfriend of Jean’s that can’t let her go.

It stumbles into schmaltz at times and is never going to be the most inventive film put out there, but with what it has, An Unfinished Life is a moving story of learning to let bygones be bygones and begin to live once more.