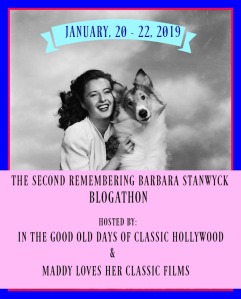 I was asked by the lovely Maddy and amazing Crystal to take part in a blogathon honouring the one of a kind Barbara Stanwyck. Naturally I jumped at the chance to write about this powerhouse of an actress.

A drama about a desperate mother taking on another identity, No Man of Her Own is tinged with a film noir style atmosphere which is largely beneficial. And even if the story has moments you have to take with a pinch of salt, Barbara Stanwyck and some nice, efficient direction are two major assets to the film and ones that aid it.

Helen Ferguson is pregnant by her louse of a man, Steve Morley. He cruelly discards her even though she barely has any money and will be left an unwed mother. All Steve does is give her a ticket from New York to San Francisco, which is Helen’s original home. 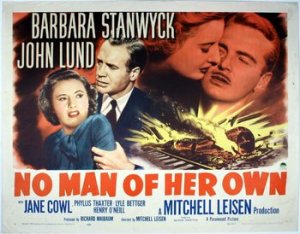 With nowhere to turn, Helen who is eight months pregnant, boards to the train to an uncertain future. She is shown kindness on the train by recently married couple, Hugh and Patrice Harkness. Patrice is also pregnant and shows great mercy to the struggling Helen. While they are getting ready for the next stop, the train is involved in a catastrophic crash. Helen survives and is taken to hospital, where her baby is delivered. Patrice and Hugh die almost immediately after the train crashes. As she is wearing the wedding ring of Patrice(which she was minding while the real Patrice was washing) and is pregnant, Helen is mistaken for the dead woman. And as her affluent in-laws never met her, they assume that Helen is in fact their new daughter in law. Delirious, she tries to explain the truth, but everyone thinks she is still suffering from trauma and is not aware of what she is saying. Although she feels guilty and torn about taking her place in the family by lying, she’s so desperate that she can’t help but accept the open arms of the loving family. The mother and father are so very kind and Hugh’s brother Bill takes an almost immediate liking to her. As time goes on, life turns good for Helen as she assumes the place of Patrice and finally feels welcome somewhere, possibly for the first time in her life. But her happiness takes a turn when the twisted Steve shows up in her life again. He plots to blackmail her and asks for money to secure his silence. Helen is once more thrown into another predicament that could have terrible ramifications, just as her life was becoming comfortable and she was feeling accepted. Desperate times it seems call for even more desperate measures.

No Man of Her Own is  a combination of the woman’s picture and film noir. Though that may sound like a strange hybrid, with the deft hand of Mitchell Leisen at the helm, it largely coalesces well and has some fine atmosphere. From the opening of a peaceful middle class street, accompanied by the ominous voice over from Stanwyck, it captures the attention a lot as you aren’t sure which way No Man of Her Own will go.

As darkness grows, a noir atmosphere of dread and desperation is never far behind Helen, with shadows and plays of light helping to show her in a very hard predicament. But you’re with her every step of the way and aligned with her attempts for a better life and to improve that of her child. Some leaps of faith need to be taken with some elements of the story and how neatly they fall in place. In the second half, the pace hits a bit of a lull but is thankfully rescued by watching Helen formulate a plan to rid herself of the loathsome. It’s only when the ending arrives that some of the greatness was supplanted as it feels a little too wrapped up and cheery for such a serious story. But despite these flaws, No Man of Her Own is immensely watchable in my eyes. A grand musical score compliments the atmosphere and emotion of the piece in that special way it seems only old movies can do.

Holding everything together is the powerful Barbara Stanwyck. Always someone who 100% to any role, No Man of Her Own is no exception.

Exhibiting pain, relief, desperation and doubt, often within seconds of the other, Stanwyck is never short of compelling here. It’s all there in her face and we feel every ounce of emotion to it, and just how expressive it is. Even when the story stretches credulity, it is the determined Barbara Stanwyck that brings everything back together and worth watching. Stanwyck is a powerhouse no matter what she does. John Lund is a tad wooden as a possible suitor for Helen, but he gets better as the movie progresses. Exuding weasel tendencies and a nasty glimmer in his eye, Lyle Bettger is superbly cast as the main antagonist who could jeopardise what Helen has tried to do in order for a better life. Believe me, he’s one nasty piece of work. Rounding out things are Jane Cowl and Henry O’Neill as two lovely and welcoming in-laws.

Though it’s far from a perfect film, No Man of Her Own survives via the committed work of Barbara Stanwyck and the stylistic look of the film. These are elements that you will remember after viewing this movie.