Coming after the misunderstood and much maligned Alien 3, Alien Resurrection emerges as a mixed bag. We’ve got the horror and action for entertainment as well as some interesting and very stylish ideas, but also some wasted opportunities that could have been expanded on.

Two hundred years after Ripley sacrificed her life to kill the alien that was growing inside of her, scientists aboard the spaceship Auriga, have managed to create a clone of her, as well as the Alien. 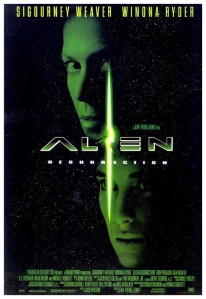 The corrupt and greedy scientists are part of an illegal experiment in raising the creature and developing many other like it. The operation is overseen by General Perez, corrupt scientist Wren and creepy Dr Gediman. Perez enlists the illicit services of a group of mercenaries in bringing human cargo aboard. The group of mercenaries consists of leader Elgyn, sarcastic Johner, enigmatic Call, paraplegic Vriess, weapon-bound Christie and Elgyn’s romantic interest Hillard. Once aboard, the cargo that they have provided will be used as the hosts for the Alien. Meanwhile, because of the cloning procedures, Ripley has developed super strength, acidic blood and a mental link to the Alien. Her personality has drastically changed and she is now a slinky, ambivalent and almost predatory shadow of her old self. The Alien itself has also evolved and is now more dangerous than ever. The mysterious Call discovers Ripley and it is revealed that she is part of a resistance movement that want to kill the cloned Ripley, in order to wipe out the Alien. Call is too late and soon enough the intellectually advanced beasts manage to escape and leave a trail of bodies in their wake.

The newly cloned Ripley teams with the group, which also acquires the services of soldier Distephano and Purvis, one of the humans who was used as a host for the Alien spawn. There is also the presence of the Newborn, a loathsome hybrid of human and Alien that has been born from the Queen Alien to contend with. With time running out before the ship lands on Earth and carnage erupting from every possible place, Ripley and the group must fight to stay alive and make it out safe.

Alien Resurrection may aim for the claustrophobic impact of the spaceship setting of the original Alien, but there’s something hollow to it here that doesn’t match the iconic first film. Sure, the set design is great with slippery surfaces, dark tunnels and Alien nests to get through, but this style is not enough to sustain an impact. The ghost of the previous and more effective films hangs over Alien Resurrection and thus makes it a weaker sequel to such illustrious predecessors. There is also a wealth of interesting themes at play here, such as the dangers of cloning and hybridity, but they are not developed enough to be sufficiently interesting for the audience. Where Alien Resurrection succeeds is the action and horror, which are both in high supply.

Standout sequences include the gang having to swim to another chamber while being chased by the rapidly advancing Aliens, Ripley’s descent into the nest and the gory scene of the Alien’s putting in motion their brutal escape from confinement. Jean-Pierre Jeunet is in the director’s chair and brings an unusual and eerie quality to this entry of the science fiction saga. Always keen visually, he brings verve to the corridors of botched clones, slimy pits and blood that score highly in my book. There can be an over reliance on special effects to be found in Alien Resurrection, but at least for the most part, Jeunet manages to keep it under wraps. The score provided makes uses of slithering percussion and punctuating brass, twinned with bristling cymbals and twinkling piano to symbolize the link between Ripley and the Alien, as well as the growing terror that the characters are plunged into.

Weaver really seems to relish showing us this newly modified Ripley, who may not have the humanity of her human counterpart but still has the unmistakable steel and wits to survive. Essaying the role for the fourth time, Sigourney Weaver is once again as riveting as ever. Winona Ryder brings a mix of pluck and vulnerability to the role of the enigmatic Call, who has own agenda for coming aboard the ship. Ron Perlman brings his familiar quality of being a super bad ass to the part of the dryly humorous Johner, while Dominique Pinon as the wheelchair-bound but heavily armed Vriess is clearly having a blast. Gary Dourdan brings intensity to the part of the skilled fighter Christie, whereas J. E. Freeman oozes oily menace as one of the corrupt scientists aboard the ship. Raymond Cruz is wasted as a renegade soldier who teams with the survivors, while Brad Dourif chews the scenery as the twisted Dr Gediman. Unfortunately Dan Hedaya, Michael Wincott, Kim Flowers and Leland Orser and chronically underused and given barely anything really memorable to do in the film.

A film very much full of ideas but not as thrilling as it could have been, Alien Resurrection is despite its flaws quite entertaining and manages to just about get the job done.