The sequel to the successful first Hellraiser, Hellbound: Hellraiser II takes the groundwork of the first movie and expands on it to a largely successful and eerie effect. Atmosphere and blood-curdling horror arise again, and though I took issue with a few of the choices the film made, it is a very worthwhile continuation of the macabre story of demons and sadism.

Beginning hours after the first film, we pick up with a terrified Kirsty. She has been placed in a psychiatric hospital for evaluation. 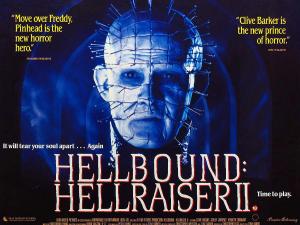 The memories of what happened to her father, evil stepmother Julia and horrid Uncle Frank( not to mention the journeying Cenobites) are still fresh in her mind. Though when she tells the police her story, they don’t believe a word she says. She is referred to the head of the institution Dr Channard . No one will listen as Kirsty tells them that the mattress that Julia died on must be destroyed so she can’t come back via her blood. She also gets a vision that she believes is from her father asking her to save his soul from hell. Channard’s assistant Kyle seems to be the only person to believe Kirsty, though he soon grows suspicious of Dr. Channard. And so he should be, as secretly Channard is a man obsessed with the occult, in particular the prospect of the Cenobites and the gateway to hell. Surreptitiously, he gets hold of the mattress on which the wicked Julia died and by using one of his patients, he brings her back as a skinless being. He then takes it upon himself to nourish her and by using more of his patients, Julia quickly rejuvenates to human appearance. Channard believes she will help show him hell, which is later depicted as a labyrinth of suffering. Yet the twisted Julia has her own motives that she keeps hidden as she leads him on. Employing mute patient Tiffany, who is adept at solving puzzles, he has her open the puzzle box, unleashing the Cenobites and finally the gate to the labyrinth.

Kirsty follows them into hell in search for her father, encountering Pinhead and his followers along the way. Yet what she discovers is something she never expected. As is taken deeper into the realm and exposed to the horror, his evil alarmingly grows. It is now up to Kirsty, along with Tiffany, to survive the horrors of hell and return back to reality again.

Tony Randel takes over directorial duties and does a very good job of things. His directing is lacking in confidence at times and wanders on occasion, but it is all pretty imaginatively structured and represented. There are however a few inconsistencies and diversions of plot that hampers a bit of the film and could have been explained better. I also found a specific scene between and the Cenobites to be less than stellar. I won’t spoil the scene for those of you that haven’t seen it,but it was for me an underwhelming moment in what is a largely effective sequel.

On to the good stuff, which outweighs the negatives by a gigantic margin. I appreciated seeing the back story of Pinhead and how he was once a human being. It presented more of a dimension to the character than before and this plays well into deepening the character. The continuing exploration of the Cenobites and how they occupy an ambiguous playing field when it comes to their actions is also impressive as they seem to have some humanity left inside them. The production design is a huge high point of this shocking venture into the recesses of hell and the brutal pain of it all.

The hellish labyrinth is imaginatively staged with never-ending corridors and strange mystical ways of tricking your mind with subterfuge. Combined with a hued aura to the cinematography that gives that otherworldly feel needed for this kind of project, and the film rockets to the top in the visual department. All of this brings a sense of expansion to this world that is very intriguing to witness. The first film was largely contained in terms of story and setting( which worked amazingly), whereas Hellraiser II raises the stakes and goes another step by exposing the bigger implications of the puzzle box and the Cenobites realm. On the effects side, some parts of this film have dated. But the practical parts, like the sight of a skinless Julia and the iconic Cenobites, are still as phenomenal as before, if not better. I mean, just look at Pinhead once again and tell me you’re not impressed and more than a little freaked out by his appearance( and not forgetting his savage transformation when he was human into the creature we all know.) Hellbound also boasts a larger bloodletting than the first film, with many scenes squirm inducing but with a purpose of exploring the pleasure and pain of the world we enter once the box is open. The feeling of grandiosity is further heightened by the score from Christopher Young. Regaling us with choral chanting and crescendos of orchestra, the perverse mystique and surreal nature of the film and the mythology is given sonic life with this spine-tingling music.

Ashley Laurence reprises the role of Kirsty, who may be traumatised but is not going to just sit down and let all hell break loose.

Since the first film, she has hardened and is more resourceful than ever. All of this is played just right by Ashley Laurence, who displays a sympathy for the character but a willingness to take on what is in her way, even if it gets bloody once again for her. She is a good horror heroine who you find yourself wanting to beat all the evils she encounters. The excellent Clare Higgins also returns as the resurrected Julia; now a lot more devious and sinister than the first time we saw her. Higgins clearly has a real ball essaying the horrifying part; imbuing a certain seductiveness to the despicable queen of hell who has her own personal agenda once brought back to shocking life. Kenneth Cranham is wonderfully cast as the true antagonist of the film Dr. Channard. He plays the part with such an eerie quality that gives way to mania as enters the hellish dimension and undergoes an even more horrifying change. A lot of the creepy stuff going on in this film actually comes courtesy of Channard and his diabolical plans, and that’s quite a testament to the work of Kenneth Cranham that we are appalled by this man.

With her angelic face and large eyes, Imogen Boorman is well-suited to the role of the puzzle solving Tiffany, who is used as a pawn in this horrid game. And of course we can’t forget Doug Bradley, who once more impresses as Pinhead; the eloquent yet menacing leader of the Cenobites. The revelation of his back story adds a lot of pathos to the character and Bradley explores this well. I mean just listen to that booming voice and just feel the sense of dread that it brings. William Hope however is somewhat wasted as the curious assistant of Channard, who is only really there to become bait for Julia once she returns.

So while it had some flaws and inconsistencies in it, Hellbound: Hellraiser II is definitely still a very good elaboration on the mythological and darkly Gothic dimensions that the first film provided us with. Complete with gruesome and imaginative effects and atmosphere, Hellraiser II provides the gory delights with glee and shocks.