The third film of the franchise, Mockingjay Part 1 emerges as a more subdued sister than its previous installments. At times it does feel a bit slow and devoid of action, but at the same time it’s interesting to watch this gathering calm before the storm as it explores political upheaval and the growing sense of rebellion.

Katniss has been saved after destroying the Games in the last movie. Scared and wracked with nightmares, she is taken underground to District 13. 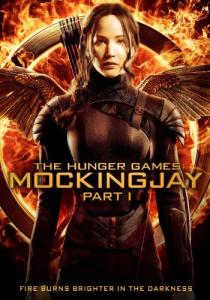 After her act of defiance, her district was destroyed and acts of protest against the corrupt Capitol have been ever-present. The enigmatic Alma Coin and political propaganda expert Plutarch Heavensbee sees Katniss as the poster girl for a full-scale attack on President Snow and his barbaric forces. The wounded Katniss is very reluctant at first to strike back as she worries about what happened to Peeta. But after seeing the destruction of her district and the sheer cruelty of Snow which includes having a brainwashed Peeta as the spokesman to talk down rebellion, that inner fire inside of her begins to burn and she becomes the face of resistance in this time of political strife and corruption. Yet with Snow using his choke hold of tyranny against the districts, it is going to be dangerous for all involved. But the newly resurfacing of Katniss is returning and she will spearhead this campaign to bring down the corrupt powers that be, aided by good friend Gale and bands of rebels wanting to be free from oppression.

As I previously mentioned, Mockingjay Part 1 is the slow build up kind of movie. For times in the film, it works very well in capturing the machinations of political rebellion and the waiting to strike. I did however find parts of it a bit dull and craved a bit more action than what was shown. 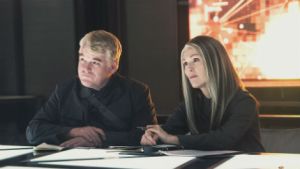 Yet this doesn’t make it any less effective as a movie, it’s just slightly different from the last two entries. Francis Lawrence crafts this engaging story with a certain topicality in the politics and propaganda used featuring Katniss as the face of resistance. Even though this film is set in the future, many of the issues it deals with are very present in our current climate which adds a further dimension to this series. Mockingjay may be the slow burner, but it has a personal and more intimate feeling to it. It may be risky to have a sci-fi/action movie that only has sporadic moments of action, but I liked the way in which Mockingjay showcases how wars can be waged with the power of words and imagery rather than just violence. An effectively bleak visual style gives voice to the darkness and terror felt by the people under the rule of President Snow. An evocative and building score helps give tension and personal feeling to Katniss as she regains her steel and prepares to fight for the people. The scene of Katniss singing ‘The Hanging Tree’ and it acting as inspiration and a call to arms is an excellent example of this as the melody flows through with urgency.

Jennifer Lawrence rivets the attention from beginning to end as the emotionally tormented heroine Katniss. 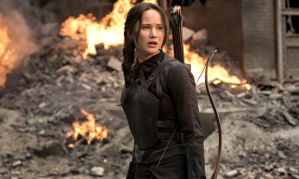 Embodying rage, pain and steel, she is a strong-willed character who can make a difference in a world of barbarity. With deep clarity, selflessness and toughness, Lawrence is a marvel to watch as the resilient and purposeful warrior due to her mature performance and sheer amount of talent. Josh Hutcherson, although seen quite sporadically this time, is strangely different as the Peeta who has been tortured and brainwashed. Liam Hemsworth contributes the mix of caring emotion and earnestness, while Woody Harrelson continues to be a hoot as mentor Haymitch. I liked seeing Elizabeth Banks as the now dressed down Effie, once the glory of the Capitol and now an ally with freedom. Julianne Moore encompasses the cold, detached persona of President Coin, while the late Philip Seymour Hoffman brings a considerable presence to his part as the propagandist. Hoffman is still missed now and this movie is a reminder of his talent and skill even in a small role. Donald Sutherland is still as menacing and commanding as ever as the despicable President Snow, who is not tolerating rebellion against his tyranny. Jeffrey Wright, Sam Claflin and Natalie Dormer in supporting roles at least make an impact, despite somewhat limited screen time.

Mockingjay Part 1 emerges as a thought-provoker rather than an action blockbuster which may disappoint some, but is still very effective in the way it is gearing up for the next part.

The Hunger Games: Catching Fire is the second film of The Hunger Games series. Following on from the groundwork set by the predecessor, it emerges as a smart, darker and more thought-provoking film. Featuring an excellent cast, a relatable heroine in the form of Katniss Everdeen as played by Jennifer Lawrence and some amazing visuals, Catching Fire is an sci-fi/action movie with brains that still delivers the goods. 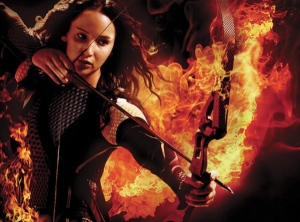 After surviving the 74th Hunger Games by threatening to kill themselves, Katniss and Peeta return to District 12. They are paraded around as victors, but Katniss is having trouble adjusting to life again. Although seen as a beacon of hope by many, she is plagued by horrific nightmares of what she had to do in order to survive. The corrupt President Snow senses rebellion is brewing as a result of Katniss’ defiance. He blackmails Katniss into saying that the reason she survived was her ‘love’ for Peeta, when in actual fact she did it to enable their safety. He threatens to kill those most dear to Katniss if she doesn’t comply with his actions, including her good friend Gale, who has feelings for her. Although he wants Katniss dead, he employs the help of the enigmatic Plutarch, a man working on the Games. Plutarch suggests using a special version of The Hunger Games in order to relinquish rebellion. In this version of the games past victors can be chosen and sure enough Katniss and Peeta are both selected for the brutal games. As the games begin, Katniss must ally herself with some of the other skilled competitors in order to emerge alive from the carnage that will follow.

Taking over the reins from Gary Ross, Francis Lawrence crafts a darker, smoother movie than the first. Whereas Ross favoured use of kinetic shaky cam, Francis Lawrence utilises more fluid shots to create a sense of journey and the uphill battle to stay alive. The special effects employed in Catching Fire are marvellous in execution, especially the various obstacles that are thrown the way of Katniss. These include tidal waves, birds that mimic the screams of a loved one and some seriously vicious and brutal baboons. The score provided accentuates the struggles, pain and horror that befalls those competing. One flaw could be the length of the film as it does drag in places, but overall the running time is appropriate.

What gives Catching Fire its thought-provoking edge is the cast of it. Jennifer Lawrence once again is phenomenal as the heroine Katniss Everdeen. Lawrence lets us glimpse the emotional scars she suffered that she hides behind her strong, armour like demeanor. As a result, Katniss emerges a multi-dimensional character, alternately strong and capable but also caring and vulnerable. It is Lawrence’s performance that gives the film its heart. Josh Hutcherson rises to the challenge by being given more to do as Peeta than in the last movie. Liam Hemsworth follows suit with a more expanded role. Woody Harrelson and Elizabeth Banks are both on fine form as the returning mentors to Katniss and Peeta. Newcomer Sam Claflin is charming as the capable contestant Finnick and Jena Malone is a stubborn, sullen but moving presence as Johanna. Donald Sutherland is gleefully nasty as the corrupt President Snow, while Philip Seymour Hoffman works well with his enigmatic role . The ever-reliable Jeffrey Wright provides the brains as the techno wizard and Amanda Plummer is delightfully kooky as his wife. Lenny Kravitz is touching as the sympathetic stylist to Katniss and Stanley Tucci is a hoot throughout.

Combining thrilling action, interesting parallels with the subtext of media manipulation and well-drawn characters, Catching Fire proves itself as a successful sequel  and great movie in its own right, spearheaded by the evocative and strong performance of Jennifer Lawrence.