Sophia Loren, following an absence of ten years from screen comes back gloriously with a wonderfully warm, fierce and emotionally nuanced performance in The Life Ahead. The story is rather familiar but is nonetheless very moving and the acting from Sophia Loren and newcomer Ibrahima Gueye is something to behold. It’s a great movie I discovered on Netflix and I recommend it to my audience.

In a seaside town in Italy, Senegalese orphan Momo(Ibrahima Gueye) lives an existence of aggression and mixed up feelings. Though he is cared for by Dr. Cohen(Renato Carpentieri), the 12 year old Momo feels isolated and not at all happy with life. He takes his anger out on others, while resorting to theft and drug dealing with others. One day, Momo steals the belongings of Madame Rosa(Sophia Loren), a former prostitute who is now seen as a respected figure in the community.

When Cohen gets word of this crime, he takes Momo him to her to say how sorry he is. The ageing Madame Rosa recognises as the one who stole from her and is not at all interested in helping Momo. Cohen is getting older and feels he can’t look after the troublesome Momo, yet senses that Madame Rosa might have something more to offer. Knowing that Madame Rosa makes money as an unofficial carer to the children of streetwalkers, Cohen persuades her to take care of for a decent amount of money. From the start, the two do not get along. Momo is a tough kid with a chip on his shoulder and a feeling of loss that he expresses with violence and dealing drugs to people nearby, while Madame Rosa is kind but firm, yet haunted by a past that includes her imprisonment in Auschwitz because of her being a Jew. It looks like things won’t be going well for the mismatched duo as they are both incredibly stubborn in their own ways. Over time and little by little, a bond develops between and they seem to bring out the best in the other while attempting to overcome their adverse pasts and unknown futures.

Edoardo Ponti, Sophia’s son, beautifully directs this gently touching tale of two people of different backgrounds and forming an unlikely bond across the. Ponti knows how to strike the right tones of feeling to the piece and elevates the rather simple material into something a step up from the usual wrought dramas, his chief asset being the development of the two central characters of Momo and Madame Rosa.

The Life Ahead does strike many familiar notes that you’d expect but it should detract from the emotional heft of the story that make it worth treasuring. I feel the movie could have ran a little longer for some more details, but the relationship between is nicely explored enough to compensate for that. Italy is captured beautifully through the cinematography of Angus Hudson, while most of the often sparse music score is nicely heard and though sometimes intrusive, it does the job well enough . There is a heartfelt song, given stunning voice and resonance by Laura Pausini and with lyrics by Diane Warren by the name of ‘Io sì’. It is quite a beauty song that rounds off The Life Ahead gorgeously and deeply.

Sophia Loren is the big standout and takeaway from The Life Ahead. The biggest piece of praise I can give to the wonderfully talented Loren is that the film wouldn’t be the same without her. She is ideally cast and embodies so many shifting feelings in a way only she can with her innate magnetism. 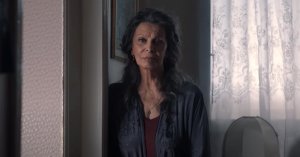 She’s spiky yet hauntingly vulnerable, funny yet morose, sparky yet slowly succumbing to the ravages of old age. You warm to her so much and it’s a treat to see all of these emotions displayed, often with only a simple look that speaks volumes from those dazzling eyes. It’s fantastic to see her back on screen and on sensational form with this vivid portrayal of maternal love and haunted memories. Newcomer Ibrahima Gueye plays beautifully off the classic Loren with a feeling of naturalism and authenticity to his work. It hardly seems like he’s acting at all, that’s how convincing Gueye is as the scrappy kid discovering that happiness can occur in what he originally saw was a life of sadness. And considering he’s starring opposite an icon of world cinema, he shows no nerves whatsoever and rises to the occasion. They are commendably supported by the gravitas of the excellent Renato Carpentieri as the doctor who sets things in motion, the fantastic Abril Zamora as a loyal trans woman who is best friends with Rosa and Babak Karimi as a carpenter/shop owner who takes Momo under his wings at work. But above all, The Life Ahead is a showcase for the undimmed power of Sophia Loren and a great introduction to Ibrahima Gueye.

A touching film of emotion and heart directed with grace and elegance by Edoardo Ponti, The Life Ahead won’t win any awards for originality but should definitely be in contention for plaudits for acting, partially from the iconic and still amazing Sophia Loren.