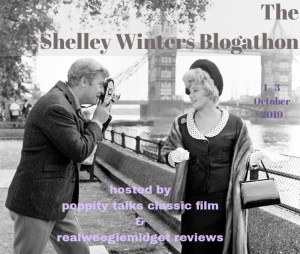 My second entry into the Shelley Winters blogathon is with the Disney fantasy adventure Pete’s Dragon, in which she plays a wicked supporting role. I must say thanks to both Erica and Gill for inviting me to take part

Charming and both bittersweet and funny in parts, Pete’s Dragon is undervalued as a film in my eyes. I think it should be reassessed and while some of it won’t hold up, you’ll definitely get some joy from it.

It’s the turn of the century and in Maine, young orphan Pete(Sean Marshall) runs away from his adoptive guardians. They are the vile Gogan’s, a hillbilly clan headed by the nasty Lena(Shelley Winters).

They’ve treated him unfairly and made him a slave, prompting his escape. Aiding him is Elliott; a large, green dragon who can turn invisible and often is only seen by Pete. They venture into the town of Passamaquoddy hoping to start a new life. With Elliott being a clumsy creature, a string of mishaps occur. Eventually, Pete finds shelter with the kind-hearted Nora(Helen Reddy), who lives in a lighthouse with her often well meaning but drunk father Lampie(Mickey Rooney). This bliss is changed by the arrival of showy quack Dr. Terminus( Jim Dale) and his sidekick Hoagy(Red Buttons). Always on the lookout for money, when he gets wind of a dragon, he schemes to capture it. Though while both Pete and Elliott are wanted by nefarious forces, it seems that Nora and Lampie are there for them to face the evil that covers them.

Don Chaffey keeps events ticking over with humour and heart. You’re guaranteed to have a smile when watching a lot of this movie as Pete and experience thrills, adventure and danger. While Pete’s Dragon isn’t held in as high a rank as other Disney films, I think it’s unfairly overlooked.

Sure it’s far from faultless and there are various issues with it, such as the length of the film, but the infectious energy and spirited heart can’t be ignored or resisted. Plus, it’s surprising how dark some parts of Pete’s Dragon are, like the singing of ‘The Happiest Home in these Hills”, in which the Gogan’s detail the horrible fate that Pete will meet if they get their hands on him. Though the overall tone is hopeful and cheery, the darkness and occasional bittersweet pang underneath in areas is a welcome addition as it doesn’t allow the film to overdose on sugary sentiment. Speaking of music, Pete’s Dragon has some lovely songs, with ‘Candle on the Water’ sung by Helen Reddy a great highlight and the sweet Boo Bop Bop Bop Bop a real gem. 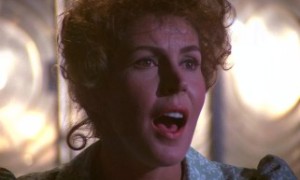 I’ve always liked this movie and may be a tad biased when reviewing it, but it really holds a certain place of nostalgia for me. I adore the blending of animation and live action, with Elliott being a wonderfully funny and endearing vision. Yes it’s not as slick as today’s effects, but damn if it isn’t darn effective at bringing to vivid life. The theme of wanting to belong resonates deeply with the viewer as it’s explored in numerous ways, not of least the eponymous orphan who is on his way to luck, if nothing bad befalls him first.

Sean Marshall takes the role of Pete and gives us a protagonist to root for, due to his honest face and general decency. He could have become annoying, but thankfully, Sean Marshall is a good child actor who doesn’t grate on the nerves. Helen Reddy is winsome and feisty when called for, plus using her gorgeous singing voice wonderfully. Mickey Rooney, all bluster and expressive eyes, is great as the initially terrified Lampie, who eventually comes around and takes Pete under his wing. Jim Dale is a hoot as the nasty but often hilarious showman Dr. Terminus, while Red Buttons is effective as his not above goodness sidekick. And now we come to the woman of the hour and her name is Shelley Winters.

Dirtied up, spouting nastiness and generally being one evil villain, Winters is obviously having a blast playing such a vile character. Villains are in good order with the Gogan’s, but it’s Winters who stands out the most as the queen of mean. The villains are over the top and yet that’s what makes them good. They are just so nasty and often cartoonish that we want their plans to fail.

While flawed and a bit over long , Pete’s Dragon is very underrated and deserves a bit more love from people for its magic, music and story.