Based on the true story of boxer Micky Ward and his unexpected comeback, The Fighter is an exceptional sports drama that benefits from the highly powered cast it has and immensely satisfying direction.

It’s the early 90’s in Lowell, Massachusetts and Micky Ward is a promising boxer with talent but not much luck. He is trained by his half-brother Dicky Eklund, who had a shot at the big time but has since fallen into drug addiction, a large group of sisters on his back and his brash mother Alice manages his career, thought it seems her main interest is the money at first. 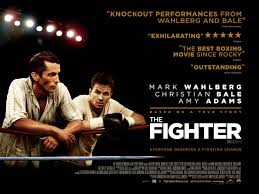 Yet while Micky has loyalty to for teaching him almost everything he knows about boxing, he has started to become wary of his brother’s drug habit and how his mother manages his career. And after another defeat that seriously knocks the wind out of his sails, he contemplates whether he should continue with boxing. Of course, his family doesn’t take too kindly to this idea. Yet Micky finds comfort in the arms of honest barmaid Charlene, who tells Micky that he will have to cut ties with his family if he ever wants to succeed as a fighter in the big time. Dicky finds himself in serious trouble and is put in prison for various crimes, which severs a lot of the relationship between him and his brother for a while. It all comes down to Micky to make this decision of whether family loyalty is as important as striving to hit the heights of greatness before it is too late and he can longer do it.

David O. Russell is on confident directorial duties and brings a variety of talent and vision to The Fighter. He uses a good helping of grit and infuses it into the material, best shown in the slight grain the film is tinted with to heighten a sense of authenticity. The crowd pleasing aspects come off amazingly and we all love to root for the underdog story, and this is one such story. Between the upheaval of family shouting matches and Micky’s attempts for success, The Fighter manages to satisfy both audiences that it is going for; the fans of boxing movies and those who like based on true life success tales. 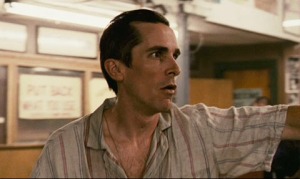 There is some great use of juxtaposition; seen when a drugged up Dicky is recounting his promising fight from years ago against Sugar Ray Leonard and then inter cut to this is the real footage of his once successful time, clearly showing just how far he has fallen since. This allows characters to shine in the film, especially Dicky, who undergoes a major transformation once incarcerated. At first, The Fighter is a little slow off the mark, before soon swinging into victory by pulling your interest into the story with the amount of energy and growing inspiration it has going through its veins. There is a healthy sprinkle of humour in the film( particularly shown in the fact that Micky can hardly get a word in edge ways because of his outrageous family) that actually works in the long run and doesn’t distract from the drama. And once the film gains footing, it plays out rather nicely and doesn’t disappoint you with its outcome. A knockout soundtrack bristles throughout The Fighter, driving a lot of the action both emotionally and aurally.

Mark Wahlberg cuts a subdued and good-natured presence, tempered with a deep feeling of dilemma of what to do. He is caught between his family and his abilities, and Wahlberg captures that excellently as the quiet heart of the inspiring story. It’s as much a physical performance as one that is emotionally internal too, a balancing act Wahlberg maintains to a high degree. 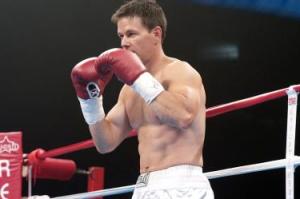 Wahlberg’s quiet and subtlety are offset marvellously by the immensely convincing work of Christian Bale, who picked up a fully merited Best Supporting Actor Oscar for playing Micky’s drug-addicted brother. His very appearance, skeletal and almost spider like in movements, is so wholly convincing and integral that you can’t tear your eyes away from him. Yet while visually adept for the part, Bale also emotively brings out the shattered dreams of the pitiful Dicky, who can’t see that his days as a fighter are over because of how hooked on crack he is. There is a tragedy to the part that Bale plays to perfection and both this and his physical commitment to the role burn into the memory for a long time.

Amy Adams is well cast against type as Micky’s girlfriend and supporter Charlene. The role allows Adams to showcase her versatility as a sexy and feisty lady; and the part is very different from how many have usually seen her in the past. Starring as Charlene, she imbues the part with an understanding and realistic toughness that fits it like a glove, as she encourages Micky to take a chance. She drops a million f-bombs, calls people out on their bull and has an attitude to burn; all of which Adams brings to the table with her considerable talents that cement her as one of the best actresses and my personal favourites out there. Melissa Leo, who collected a Best Supporting Actress Oscar for her role, is on fine form too as the mother/manager of Micky. While the part calls for her to be showy and aggressive, Leo makes it all work and unravels how Alice wants good things for her kids, she just can’t handle anyone else that she sees as getting in the way and undermining her. The role could have easily become a caricature, but with the winning Leo playing it, any such trepidation melts away as her boisterous yet realistic performances attests to.

A well-directed and entertaining sports drama, The Fighter comes out as an inspiring and eventful story with an authenticity and splendid cast ensuring a knockout delivery.

Loosely inspired by the FBI ABSCAM sting operation of the 1970’s, American Hustle is a slick, well-acted crime comedy with eccentric characters and themes of survival, deception and scamming. The style may distract from the narrative for some, but David O. Russell’s film is for the most part as tightly constructed as the perm donned by Bradley Cooper’s character. Boasting an excellent A List cast who all bring their talents to the forefront also helps with the success of American Hustle.

It’s 1978, Irving Rosenfeld is a con artist who is aided by the stunningly seductive former stripper Sydney Prosser who he is crazy in love with despite the fact he is married to Rosalyn and has a young son. Sydney poses as an English Lady of the Manor in order to help with the various cons they pull. Their scams are going pretty well until they are busted by FBI agent Richie DiMaso. Rather than hand them up to justice, he instead thinks of a better use for the two. He persuades them into helping him with sting operations, one in which involves Carmine Polito, the Mayor of New Jersey. As the operations continue, they become more dangerous as the mob becomes involved and Irving’s unstable wife Rosalyn begins to suspect something . But in the game of conning, nothing is as clear as it appears and our characters find themselves wound up in deceit and corruption. Prepare for snappy visual style, 70’s grooves and wardrobes, and a whole lot of fun as American Hustle delivers a humour filled journey through the world of con artists.

David O. Russell directs with visual nods to Scorsese and other crime capers. It is impossible not to watch the snappy edits and use of soundtrack and not think of a Scorsese movie. Although the visuals may overpower the story at certain points and the tone can be a little uneven, the script manages to entertain the audience none the less. Featuring humour galore and interesting characters to flesh out the sharp, snazzy story and the various incidents arising from Richie’s complicated plans. Various scenes that stand out are Irving’s morning routine of styling his elaborate comb over, the sassy Sydney dancing with Richie to the sound of Donna Summer and the unpredictable Rosalyn’s run in with a microwave (which she refers to as a space oven). Special praise must go to costume and hair styling as it is second to none. From gaudy ties to slinky sequined gowns and perms , American Hustle has major props when it comes to styling these characters that populate this crime comedy.

Yet the biggest impression and the thing you will remember the most, is the talented and starry cast of American Hustle. Christian Bales absolutely nails the role of Irving, giving us an interesting character who can be smart, jealous and skilled. Bale gained around  40 lbs for the role and the results show his commitment to the role and how skilled an actor he is. Amy Adams provides a multi-faceted performance in the form of Sydney; she’s intelligent, at times ruthless and sexy as hell. Adams shows us all these sides to her that helps us wonder which side her character really is on in this thrilling con game. Bradley Cooper is an absolute hoot as the over eager FBI agent Richie, he really does make your side split with some of the remarks he comes out with. Jeremy Renner manages to give us a sympathetic character as Carmine, the mayor who makes bad decisions for good reasons and as a result is drawn into the operations. Rounding out the main cast is Jennifer Lawrence as the unstable and spurned Rosalyn. Lawrence really is hysterical in this movie and the film gains a certain vibrancy and spontaneity whenever Rosalyn is onscreen as you wonder what she will possibly do next.

Snappy, hysterical and all round good fun, American Hustle is stylish and well executed. The substance may be slightly lacking, yet you will probably not notice because of the stunning central performances provided. American Hustle is some of the most fun I’ve had at the cinema for a while.