A 70’s horror with an all-star cast, I was expecting The Sentinel to be a treat. Alas, it was a shoddy mess that descended into ludicrous and incomprehensible places. There are nary any positives in this film, which could have been something special, fur floundered into the abyss of rubbish.

Alison is a young, pretty model living in New York. Though in a relationship with slick lawyer Michael Lerman, she is reluctant to move in with him or consider engagement. She decides to find her own place to live.

While seemingly living the high life, Alison has baggage in her memories that still haunt her and refuse to let go. Continuing looking for a place, she is recommended by realtor Miss Logan, a beautiful Brooklyn Heights apartment. She notices a man in the top apartment window. Miss Logan informs her that it is Father Halliran, a blind priest who seems to sit there without ever really moving. Thrilled at the scope of the place and the reasonable amount being asked for, Alison moves in. Shortly after arrival, Alison encounters some of the strange tenants of the building, starting with the peculiar and intrusive Charles Chazen. Gradually, Alison’s nights are disturbed by horrific visions of her troubled past that involved an attempted suicide and is plagued by unnerving noises from another apartment. Frightened yet very curious, Alison is then shocked to learn that only she and Father Halliran reside in the complex, with no one having previously occupied it for three years. Becoming more alarmed by events that may or may not be real, Alison crumbles completely. Somehow, she is linked to a centuries old pattern that the apartment block has which poses a deadly and potentially otherworldly trouble. Can Alison really figure out why these visions appear and what sinister designs are being made for her?

Michael Winner gets some atmosphere going at the start, but his lack of taste and frankly trying direction makes The Sentinel really drag and go into a place of boredom. 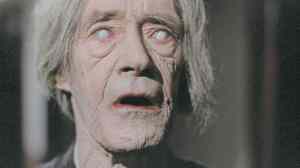 He plays up the overt sensationalism and outrageous moments to an extent that they aren’t frightening or remotely chilling. The visual style is one positive point( even though it’s sadly only one such instance) finding a certain gloss and at least setting some spooky aura. This however is drowned out by the sheer implausibility and inanity  of it all, that causes The Sentinel to be a major let down. The Sentinel film that could have been something if thought had actually gone into. What we are left with is a confused and histrionic film, that doesn’t generate hardly any terror or resonance. There is one scene that is rightly celebrated for its scare factor, but apart from that, The Sentinel is laughable and deplorable. I mean, I’m game for some campy and melodramatic moments in horror, often they can be quite fun. But the overload, coupled with a dragging, not to mention hard to follow story, was too much for me to take. And there is one thing in The Sentinel that really left a bad taste in my mouth. When all hell breaks loose and the supposed fright of the movie is in swing, one manifestation of evil is depicted as people with prominent deformities. The main thing I took issue with was that the people used were actually deformed themselves. When you put a physical defect or disability on screen, it should be done with respect. Here, it equates the deformities with evil, which really didn’t lie well with me. It felt exploitative and mean-spirited, especially as the implication it made was in very poor taste. The music score is passable with some unusual passages, yet like the rest of The Sentinel, over cooks events to a laughable degree.

As aforementioned, The Sentinel has an unbelievable cast. The sad news is, hardly any of them are given anything to work with and show off their skills.

Cristina Raines, in the lead of tormented model, is basically required to look frightened and pretty. She does both things well enough, but there’s nothing really meaty for her else to do. Chris Sarandon at least tries his best with putting some cocky attitude into the role of the lawyer boyfriend. John Carradine, heavily made up to look older, is pretty effective as the largely silent priest whose eerie presence hangs over the building. Burgess Meredith rocks creepy to the hilt as a pesky and very unusual neighbour, who becomes more than just a common nuisance. Ava Gardner is completely wasted as the realtor of the place, only appearing a handful of times and not equipped with much in the way of action to play. Deborah Raffin is pretty bland as Alison’s best friend, while experienced veteran actor Arthur Kennedy at least contributes some mystery as an enigmatic priest. Eli Wallach and a young Christopher Walken are seen in a thread of the story that makes no sense and wastes the obvious talents of two reliable stars. Martin Balsam and José Ferrer, two fine actors, both appear in blink and you’ll miss it roles which is extremely unfortunate. Sylvia Miles and Beverly D’Angelo certainly have the strangeness down in their parts, but not much else because the script restricts them. Bit parts are also handed to Jeff Goldblum and Jerry Orbach. The mix of old and new stars was supposed to be amazing, but they are never given any time to shine or strut their stuff.

A big mess of a movie that showed potential but quickly became farce, The Sentinel is one to avoid in the horror genre.

Dolls have always been a source of terror in the horror genre and the addition of Chucky who features in Child’s Play ranks as one of the freakiest. A creepy slasher film, Child’s Play moves at a thrilling pace and delivers the scares with some well-executed(pardon the pun) scenes of gruesome havoc and murder.

Child’s Play opens with Detective Mike Norris in pursuit of renowned serial killer Charles Lee Ray, who has an obsession with voodoo . Charles manages to hide in a nearby toy shop after his getaway driver Eddie drove away upon seeing police. Mortally wounded by Mike and swearing revenge on both him and Eddie, Charles through use of dark magic transfers his soul into a ‘Good Guy’ doll. 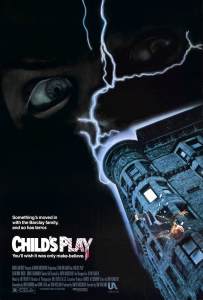 The next day is the sixth birthday of Andy Barclay who is excited to get presents from his widowed mother Karen. Seeing that her young son desperately wants a Good Guy Doll, she buys one from a peddler, little realising that it is the one that Charles is inhabiting. Young Andy is over the moon with the doll who has the name Chucky and is barely seen without the toy. Yet after the horrifying death of Andy’s babysitter who was pushed out of a high window, the malevolence becomes known. Andy knows that Chucky is the culprit, but everyone just thinks that Andy is lying and that his talk of the doll coming to life are completely ridiculous. Mike Norris is put on the case and is baffled by the mysterious death, initially believing Andy could be a suspect as he was the only one home when the babysitter was murdered. Yet as the blood continues to spill thanks to the doll, it’s up to Karen( who comes to realise the truth in Andy’s claims) to protect her son from the horror as he becomes the next target of the murderous spirit in doll form. 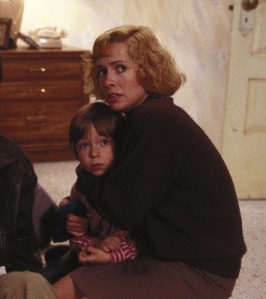 Part of the reason is because Chucky must transfer the evil soul of Charles to the first person he revealed himself too as he is becoming more human by the minute. This means that young Andy is in very real danger. It’s getting people, most of all a skeptical Mike, to believe in the evil doll’s intention that is going to be Andy and Karen’s problem as his life is put in jeopardy repeatedly, he is placed in a mental hospital and Karen must finally see the evil that poses a threat to her son’s life.

Tom Holland’s direction is to the point and filled with imaginative touches that relish the tension and terror of the presence of Chucky. While it is no surprise to the audience that Chucky is the instigator of the horror that is blamed on Andy, this device actually works in the movie’s favour and still contains chilling suspense. We are put in the position of frightened Andy who in the beginning adores the new toy but slowly sees that the games he plays are horrifying and out of control. By using the technique of having us in Andy’s shoes, we want the grown ups to take notice and finally see the engulfing terror brought by the evil doll and this is where Holland’s strong suit lies. I will admit that as the film went on, some of the fact that the grown ups don’t realise what’s going on got a bit frustrating and a few instances have some tin-eared dialogue, but this thankfully was made up for when the real horror is unleashed and such things take a back seat to effectively staged scenes of creepiness.

Chief among these is the murder of Andy’s babysitter and the big showdown between Chucky, Karen, Andy and Mike. It surprised me too how well some of the effects hold, particularly in the creation of evil Chucky. Granted it’s a film from the 80’s the effects have something of a dated quality that is to be expected, but many of them are still largely impressive and not overused. And with the creation of Chucky, a new creature of dread was born to terrorise viewers.  An electronic pulse sets the unnerving tones of Child’s Play from the beginning with a synth heavy and echoing score backing up the strange supernatural parts of the film.

A competent cast inhabits their roles very well, in particular Brad Dourif. Voicing the malevolent Chucky to sneering perfection, his inflections are decidedly creepy and frightening. 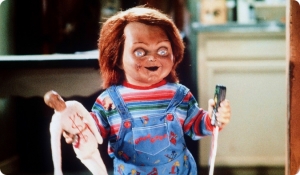 Dourif briefly portrays the human serial killer in the thrilling opening sequence and does that well, but his excellence begins with his voicing of the now iconic killer doll. Catherine Hicks is emotionally effective as the terrified mother desperate to get to the bottom of what is going on and protect her son, despite her confusion of what is truly going on at first. The little Alex Vincent stands out as the traumatised child Andy who comes under attack and suspicion due to Chucky. For a child so young, Vincent displays a naturalness that generates audience sympathy without getting overly cute. Rounding out proceedings in Child’s Play is Chris Sarandon starring as the detective involved in both linking cases and someone who is unwilling to believe in any hocus pocus. Sarandon does a credible job in the part as his views are turned upside down.

Some me parts of it show the film’s age, but Child’s Play largely holds up well as an eerie horror film that introduced the world to the malevolent Chucky and no doubt creeped everyone out in the process. I have a feeling that the sales of dolls may have taken a nosedive when Child’s Play was released in cinemas.