A frequently hilarious send up of the Bond movies and Film Noir in parts, Carry On Spying is an enjoyable and fun ninth entry into the long-running movies that is also the last to be filmed in black and white. Be prepared for a riot of laughs here.

A top-secret chemical formula is stolen by an agent who plans to deliver it to an evil organisation known as STENCH. 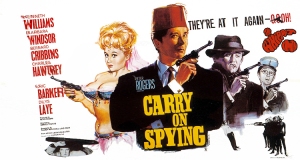 The British Secret Service are panicking at the impending doom that could grow if STENCH gets their hands on the formula. Due to budget cuts and lack of resources, the Chief has to rely on trainee agents to take part in the mission. They are headed by the snide and deluded Desmond Simpkins, and the rest consist of goofy Harold Crump, chirpy Daphne Honeybutt and clumsy Charlie Bind. They are hardly the most effective crew to retrieve something so crucial, but are aided by the fact that Daphne has an excellent photographic memory. They journey to Vienna to meet with another agent( the very Bond like Carstairs) but attempts of a rendezvous are thwarted by the incompetence of the crew and a delirious series of mix-ups that also sends them to the Algiers in search for the formula is what hilariously follows. Who ever said the spying game was just for geniuses?

Gerald Thomas is once more director and clearly on the ball with this offering of jokes and funny goings on. His sense of fun and spoofing of the spy genre is put into great effect, making the laughs flow like a nice wine. Spying is the last black and white entry of the series and it signs off from monochrome with some style and rollicking action. 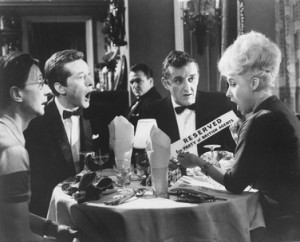 The long shadows of Noir, in particular The Third Man, as well as the James Bond movies, are sent up in hilarious fashion as a whole host of comedic mix-ups have the agents in all sorts of bother with the enemy. While spoofing spy movies and thrillers, Carry On Spying does have the right atmosphere for a movie of that kind, though one with a hell of a lot more zany antics. The pace is lightning quick, benefiting the often outrageous and farcical ventures the bumbling group get themselves into. It’s this efficiency and riotous laughs that are the biggest points of praise in Carry On Spying. From outrageous opening to hilarious headquarters mayhem, there’s no shortage of giggles to be had with Carry On Spying. The innuendo is there and often extremely funny, but never overtly in your face. This makes it an innocent but no less fun outing for the usual assembled gang and more in keeping with some of the earlier entries in the series. Matching the slapstick and crazy occurrences is a very lively score that is the definition of cartoonish.

Kenneth Williams is the main man here, delivering a scene-stealing turn playing the overblown nitwit who thinks he’s a lot better than he actually is. Employing a snide voice and dispensing on liners like there’s no tomorrow, Williams is on fine form from start to finish. Barbara Windsor( who’d later become something of a staple in the Carry On’s) makes her debut here with a light, funny and very cheeky performance.

Often later cast as a bimbo or lusted after girl, it’s quite nice to see Windsor as sexy but somewhat more innocent than her latter outings show. It’s a nice, fizzy and wide-eyed performance as the most reliable and resourceful member of a rag-tag team and one that cements Barbara Windsor as something special in these movies. Bernard Cribbins is back following the last movie Carry On Jack, and his goofiness and timing are on point as one part of the inept agents trying to retrieve the formula in rib-tickling style. The last part of the foursome is the delightfully impish Charles Hawtrey; who is customarily camp and energetic in his manner. The main quartet work very well together and the smashing fun depicted transfers directly to the audience through their enthusiasm and brightness. Many of Spying’s laugh come from Jim Dale as a man of disguise whose always thwarted and troubled by the bumbling agents. The fact that he’s on their side and they constantly hinder his chances of glory are the stuff that chuckles are made from. Eric Barker is on familiar but humorous form playing the figure of annoyed and aggravated authority that he knows so well. Dilys Laye( her last appearance being in Carry On Cruising) nicely returns with a devilishly seductive part of a go-between agent who constantly switches sides with aplomb.

Carry On Spying is damn good fun that moves along at a scintillating pace that never lets up, making the enjoyment that much more wonderful. Definitely a high point of the Carry On Movies at least in my book that is. You’ve got a good afternoon film to watch with Carry On Spying that’s for sure and certain.