Ari Aster follows up his creepy and startling debut Hereditary with Midsommar; an ambitious, head-spinning horror that builds to a stocking finale, while supplying tension, tiered meanings and an immensely dedicated performance from Florence Pugh. 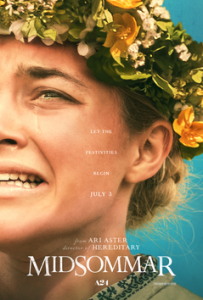 Broken by this, Dani turns to boyfriend Christian( Jack Reynor) , who is not exactly helpful and more interested in himself. Their relationship was precarious as it was and now Dani leans on him for support which he is unable to supply her with. A few months pass and Christian, who is studying anthropology for a PHD, is invited by his Swedish friend Pelle(Vilhelm Blomgren) to a festival in his Nordic homeland. He is to be joined by fellow students reasonable Josh( William Jackson Harper) and obnoxious Mark(Will Poulter). Dani finds out and Christians reluctantly asks her to come with them, to which she accepts. She’s still reeling from her trauma and suffering with depression and anxiety, but the trip sounds like a good getaway for her. Touching down in Sweden, they go back to nature among the wide fields and mountains that are populated by a commune. Dani and the others are soon witness to the ways in which they celebrate and their intriguing but slightly off kilter ways of ritual and worship. At first, the practices seem odd but just slightly different and nothing too serious. 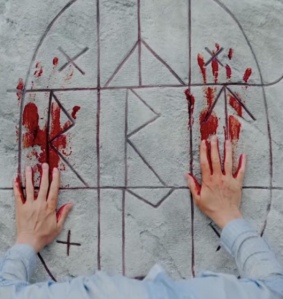 There’s dancing, ingestion of strange ingredients with hallucinogenic qualities and the fact that everyone does things in a group which while weird doesn’t really give the impression of anything dark or macabre. Yet with growing horror, events get ramped up and grisly horror ensues for the visitors, most of all fragile Dani. What started out as a sojourn to a festival with a difference slowly morphs into a waking nightmare for Dani as things just get more and more intense, impacting on her already tenuous mental state.

Ari Aster proves Hereditary was no fluke with this electrifying and bizarre blend of psychological folk horror and a meditation on trauma. He goes for the creeping approach, peppering in shocks and even snippets of humour at the start then slowly bubbling away at the uneasiness mounting like a fit to burst volcano. 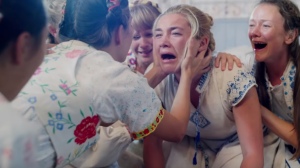 Grief seems to be a subject with which Ari Aster is familiar with and Midsommar continues in that vein but from a more surreal and grander scale. The most obvious comparison to Midsommar is The Wicker Man. Both films feature a community that’s pagan religion deviates from what is deemed traditional and most of the action takes place in sunlight. References can be seen and are well done( for me it’s a high comparison with a classic), but Midsommar is its own film with a hallucinogenic sensibility and layered drama. While very much a horror film, Midsommar functions as an exploration of reaction to trauma, purging the soul and toxic relationships. The last mentioned point on relationships is especially true as things continue to go downhill for Dani. The horror hits home more for that very reason and then some. I believe Midsommar is the type of movie that is rewarding upon watching again. Pockets of information are scattered often in plain sight but make more sense once the whole picture comes together with frightening force. You’ll be left thinking about the film no matter how you feel about it that’s for sure and certain.

On a visual level, Midsommar is an assault on the senses. From a flipped shot that goes upside down in arresting fashion to the houses the commune live in that are decorated with telling murals, you can’t escape the sensory overlord and beautiful cinematography. The use of wide shots and aerial shots captures the surrounding in majestic form, fleshing out the setting that is as breathtaking as it is unsettling. Bathing events in a mostly bright sheen, horror plays out against flora and fauna in a most peculiar way. The setting is alive, quite literally in some parts as you’ll no doubt be witness to if you venture out to see Midsommar.

One of my favourite touches is Dani among the ladies dancing around in circles, adorned with a flower headdress. It’s a scene that overlaps images to a dazzling effect and perfectly sums up the unusual stance of this movie. It’s spellbinding even when outrageous and stomach churning festivities are taking place, making sure you never quite look away from what’s presented to your eyes.The use of sound is exemplary, from the unusual rhythms and punctuated noises to the eerie sense of silence and stillness. It compliments the atmosphere of something being very sinister and extremely horrifying to come.

At the heart of everything is the promising Florence Pugh. Over the last few years she has impressed me with her versatility and she doesn’t disappoint with her performance  in Midsommar.

She’s contained and crumbling under the burden of grief, constantly attempting to stifle her feelings. When it all comes out, Pugh nails the anguish and the sense of release, coupled with the slow and crushing sense of falling deeper into horror( or is it something else?) Her eyes are fascinating at profiling her internalised emotions that eventually reveal themselves with shocking intensity and surprising depth. Put simply, Florence Pugh impresses throughout with her surrender to challenging material. Jack Reynor nails it as the conceited boyfriend who gets put through his own horror and Reynor shines in the horrifying last act. Vilhelm Blomgren, William Jackson Harper and Will Poulter flesh out the other men of the movie who experience the terror unfolding, with Will Poulter the most memorable as the guy obsessed with getting sexy action and getting a lot more than he bargained for. As good as the guys are though, Midsommar belongs to the exceptional Florence Pugh who is for my money, going places.

Horrifying, hypnotic and hard to forget, Midsommar is one of the most unsettling films I’ve seen in a while. But like it’s predecessor, once you’ve viewed it, you can’t shake it. Ari Aster is shaping up to be a major league director and Florence Pugh is fast becoming a prominent and talented actress to watch.

A visceral, emotionally haunting and horrifying psychological horror from the debuting Ari Aster, Hereditary plunges you into grief, family secrets and the terror of what we might inherit from our relatives.

Annie Graham(Toni Collette), a miniatures artist, is mourning the death of her secretive mother. 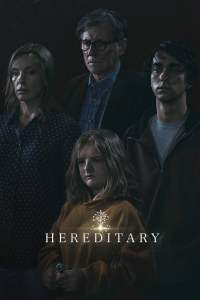 She is joined in this by her therapist husband Stephen( Gabriel Byrne)and their two children; bored and dejected 16-year-old son Peter( Alex Wolff) and unusual tomboy daughter Charlie( Milly Shapiro) . The thing is Annie was estranged from her mother and various things in her past impacted their tenuous relationship. while young Charlie, who was her Grandma’s favourite, begins acting even more strangely than usual. Soon enough, a strange force begins plaguing the family. Though she secretly visits grief counselling for guidance, Annie believes she sees her mother again, Charlie also sees visions of this along with unusual phenomena. Peter buried his feelings in smoking pit and trying to get girls but tragedy brings him back around. Stephen is the main point of attempted calm in a powder keg situation that slowly starts to unravel. It all pertains to the deceased Grandmother, but how does it? As grief and tragedy plunge the family further into turmoil, Annie starts to lose her grip on her sanity and events descend into a waking horror for the Graham’s. Matters aren’t helped by the arrival of Joan(Ann Dowd), a mysterious woman who ingratiates herself into Annie’s life with shocking results.

Ari Aster marks himself out as a director with a future. He’s clearly a guy who loves his  spine-chilling, psychological horror and Hereditary is a testament to that. He’s got a fantastic handle over pacing; slowly dropping crumbs of information and things you think are just accidental, but are intentional. 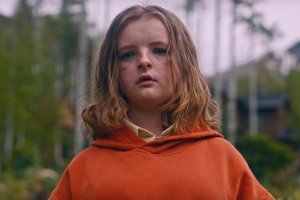 It’s a slow burn that’s punctuated by moments of shock horror and extreme situations, while still examining the ups and downs of grief in a bubbling way. Then when we get to the heart of things, all hell breaks loose and Aster unleashes chilling moment after moment. Be warned, the last half an hour is some intense stuff that will make even the most seasoned horror viewer sit up and be freaked out.

You’ll be left with images of great horror and of an unsettling nature once you finish Hereditary. And with good reason as they are plentiful and a credit to the visual team and the exploration by Aster. 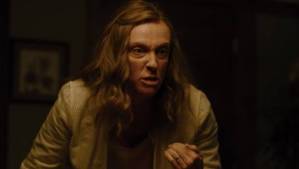 From slowly zooming camerawork to a mastery over sound( the sound of a tongue clicking will haunt your dreams as will Colette’s roars of grief and an intense dinner scene) , it’s a movie for definite horror fans. The claustrophobic atmosphere, heightened by the abundance of scenes within the family’s large house, helps us ruminate in how grief can isolate is and how familial ties are not always . This film isn’t full of cheap scares as it has more on its mind. Take for instance when Annie believes she sees the ghost of her mother. Most horror films would feature a sudden reveal, not here. Instead, Aster uses a wide shot and gets the audience to really pay attention as to see whether it was real or not, as if daring us not to trust our eyes. I admired Hereditary for the fact it didn’t have to resort to throwaway scares. Hereditary is certainly not for everyone, but for those with a penchant for dramatic scares and unusual imagery, this should be a treat. A rumbling score is the cherry on top of the cake as murmurs, low electronic humming and unusual instances of cacophony blend hauntingly.

One of the finest things in Hereditary is the committed performance from Toni Collette, who turns in some of her finest work. 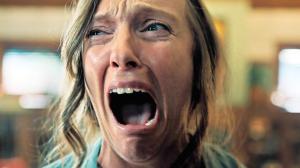 She’s put through the wringer of emotions and just displays them all so convincingly and vividly. From grieving daughter to mentally unstable and all that’s in between, Collette doesn’t miss a beat and often conveys varying feelings within seconds of each other. One can’t stress enough the sheer full throttle force with which she acts here. It has to be seen to be believed and experienced. Gabriel Byrne provides solid support in a role that could have been boring, but rises above such worries. He’s the non believer trying to keep his family together but failing as times passes. Alex Wolff gets the alienated and confused state of mind for his character just right, going between moments of escaping pain to enduring intense suffering that makes no sense to him. Rounding out the family is young Milly Shapiro, who sends shivers down the spine as the daughter seemingly most affected by her grandmother’s death. You never quite know what to make of this little girl but she is damn important to the story. In a small but pivotal role, the ever reliable Ann Dowd exudes an uneasy sense of niceness that is tempered with something that tells you that you can’t trust her as far as you can throw her.

Super unsettling, packed with ideas and thematic value, plus boasting impressive acting and an atmosphere of never ending dread, Hereditary is definitely for those who appreciate a slow burn and a searing drama within a horror movie.