I would like to thank both Gabriela and Gill for inviting me to the Other Than a Bond Girl Blogathon. Both women are amazing writers and I was thrilled to be offered the opportunity to take part. I decided to highlight the delightful Carey Lowell, below is my review.

A supernatural horror movie from William Friedkin, The Guardian is a strange movie that is by turns cheesy and then creepy. While it is a definite mixed bag , The Guardian does hold moments of interest.

Phil( Dwier Brown) and Kate (Carey Lowell) Sterling are a young couple who have relocated from Chicago to Los Angeles as Phil has been offered a lucrative advertising job. 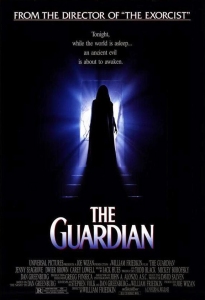 Kate also works as an interior decorator. Soon they are blessed with a baby boy who they name Jake. To ensure that they can both be around for their son as well as have successful careers, they decide to hire a nanny. The woman in question is the English Camilla Grandier(Jenny Seagrove), who comes with impeccable manners, charm and a great deal of attention to little Jake. Camilla becomes a vital part of the household, though things are really not what they seem. She is in fact a druid, and she plans to sacrifice Jake when the time is ready to a nearby tree that she worships. Phil and Kate don’t realise this at first, but various things begin to make Phil question the woman who he has hired to care for his newborn baby. The seductive and conniving Camilla begins invading his dreams and we see the extent of her power when a friend of Phil and Kate’s stumbles onto her evil secret. For Camilla, it’s all about biding her time until she can snatch Jake and complete her act of horror. The question is will Phil and Kate be able to save their baby son from the diabolical plans of the evil but charming Camilla before it’s too late?

William Friedkin has long been a director who I’ve admired. While his films haven’t always been great, he still has flashes of crazy brilliance in his work. His work here is pretty good in quite a bit of it; it’s just let down by various other areas. The Guardian is a film that’s very much up and down in terms of quality and while it has creepiness, I wouldn’t really classify it as scary in terms of horror. The constant re-writes behind the scenes and troubled production come through because of this in terms of the overall product. It’s as if the film can’t decided what it wants to be(evidenced by the often choppy editing). It can’t fathom whether it should be totally serious in terms of subject or pretty outrageous and decadent .

But some moments of brilliance shine through these many flaws , like the creepy effects used on the trees coming to life and some atmospheric dream sequences. Plus, when things do get really crazy, its quite thrilling stuff. Which makes it a shame that the rest of the film couldn’t deliver on this promise and decide what it wanted to be. A good enough score, punctuated by synth and piercing strings is employed to a fairly decent degree, even if it does feel a little sparse.

Jenny Seagrove heads the film with a mysterious and unnerving turn as a charming woman with deception and treachery in her mind. Seagrove, who is a strikingly beautiful presence, uses this to her advantage by showing little by little that Camilla is in no way to be trust because of how dangerously powerful she can be. Dwier Brown , while not being the finest actor in the business, has a few good moments later as the father unearthing his son is in danger. Brown just unfortunately has a habit of overacting, which can be rather grating after a while. And the woman who I’m here to write about is Carey Lowell.

Her role isn’t exactly what you’d call the deepest role(new mother realising something is very wrong with the woman she has trusted with her child, Lowell brings out a convincing concern and sense of terror that is very watchable. I would have liked to have seen more of her in the film, but for when she’s on the screen, Carey Lowell gives a pretty fine performance of maternal vulnerability and underlying strength. In essence, it’s the main ladies who dominate this film.

So I must conclude that The Guardian is rather messy as a film with an editing scheme that renders parts as scattershot.  But with a competent  cast, notably Jenny Seagrove and of course Carey Lowell , plus some good visuals, they provide interest in what is a flawed but watchable film from William Friedkin.

13 thoughts on “The Guardian”