A swashbuckling fantasy adventure inspired by of all things a famous ride at Disneyland, Pirates of the Caribbean: The Curse of the Black Pearl is rousing, high spirited fun full of action and derring do. I’m sure many were doubtful about a film based on a theme park and how it would go were very surprised by how effective and throughly entertaining it turned out to be.

It’s the 18th Century in the Caribbean and in Port Royal, things are about to get very interesting. The arrival of the infamous Jack Sparrow( Johnny Depp), he of the keen wits, outrageous antics and swagger, is picked up on by the admiralty after he arrives in port minus a ship. 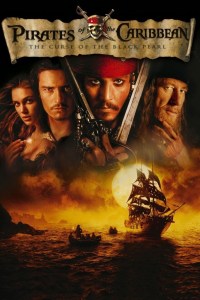 Meanwhile, the beautiful Elizabeth Swann( Keira Knightley) is being prepped for marriage to the newly promoted strait-laced Commodore Norrington(Jack Davenport). But this is not as simple as it seems as Elizabeth is chafing at society and there is someone else who carries a flame for her. That someone is dashing blacksmith Will Turner( Orlando Bloom), who admires her from afar but doesn’t act on it because of how rigid society is. Elizabeth helped rescue Will as a boy when he was found floating in the sea when she was making the journey to Port Royal as a little girl. She took the necklace that was around his neck as it identified him as being related to pirates. Years later she has the necklace and is still intrigued by pirates. However society and her protective father Governor Swann( Jonathan Pryce)have subdued these ideas of a life on the high seas. The gold piece soon brings danger to Port Royal when a menacing ship by the name of The Black Pearl attacks. The vicious pirates aboard kidnap Elizabeth, though through her pirate knowledge she manages to stay alive. She is taken to the cursed ship and here she meets the wily Captain Barbossa( Geoffrey Rush) and she gives a false name(Will’s last name) that intrigues the crew. Barbossa is in search of  the last piece of gold from a cursed treasure chest, which currently hangs around the neck of Elizabeth. The curse renders anyone who touches it to become one of the living dead, which Barbossa and his crew are. 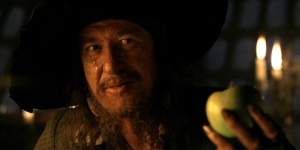 Only by the spilling of blood from one of pirate lineage can break the curse, which the crew mistakenly believe is Elizabeth. Though Commodore Norrington wants to go about things in the proper way befitting his training, the determined Will has other plans to get Elizabeth back. Will can’t stand pirates, as he is unaware of his own historical link with the sea faring scoundrels, but decides to implore Jack Sparrow for help. Springing Jack from jail and still distrustful, he begins to work with the rapscallion that is Jack. After all, The Black Pearl was Jack’s ship before Barbossa proposed a mutiny against him, thus leaving the crafty cursed pirate as captain. Elizabeth emerges as a stronger person along the way, with much in the way of being resourceful and surviving among buccaneers. Jack Sparrow and Will still have a bit of animosity but work some of it out in their quest to rescue Will’s beloved from the hands of Barbossa . Jack always has something up his sleeve that allows for many turns and twists in what is an epic journey. Much adventure, double crossing and events across the high seas follow for the characters in this adventure.

Gore Verbinski fashions a rollicking adventure yarn with a flair for humour and a really good time of excitement for almost everyone. He clearly knows what he’s doing and provides us with a film that is thoroughly sweeping and action packed. There’s something delightfully old fashioned about The Curse of the Black Pearl, which is mixed with a contemporary and irreverent sense of humour.

The two aspects melding make the film very appealing to a pretty wide audience with old school feeling of swashbuckling and off the wall humour and modern cinema techniques proving rather good bedfellows. Pirates become fun and the genre of the swashbuckler is resurrected in style. As I said earlier, I’m sure many expected The Curse of the Black pearl to fail because of its origins. These naysayers were obviously thrown for a loop when it turned out to be a rip-roaring fantasy adventure that both critics, audiences and this reviewer loved. You’d have to be Scrooge to not find something to tickle your funny bone or make you feel swept along on a great voyage in The Curse of the Black Pearl. Set pieces and action are what allows the film to flow on a well tuned ocean of entertainment and swordplay. The effects are rather excellent too, especially when it comes to the undead crew. They are rendered gloriously creepy in the moonlight and make many a good sequence, particularly the first reveal of them to a startled Elizabeth. One little flaw is that the film is a bit overlong and could have used some trimming. Though you can forgive it as the ride is a fantastically enjoyable and enthralling voyage into a time of swashbuckling action and spectacle. The score from Klaus Badelt is a splendid accompaniment to the events on screen, while mixed with a slightly jaunty air that permeates through with brio.

One of the biggest things that stands out in The Curse of the Black Pearl is obviously the cast, headed by a wonderfully creative and attention grabbing Johnny Depp. Portraying the flamboyant and witty Jack Sparrow who always seems to be able to get out of a scrape, Depp is obviously having a ball putting all manner of eccentric traits into the part with superb comic timing and suitable panache. From the drunken walk, ability to confuse those in his way with riddle like language and a daring glint in his eye, Jack Sparrow comes alive thanks to the reliable and unique talents of Johnny Depp. He’s the definitive scene stealer in this adventure and make no mistake about it. The Curse of the Black Pearl would not be the same without him. Then we have Orlando Bloom as the main hero of the piece. Bloom, while not being the finest actor around, has the right physicality and noble presence to compensate for some niggles in his range. Plus he makes for an attractive partner for Keira Knightley as the two characters begin to find themselves acting on their feelings after keeping them under wraps.

It’s Keira Knightley, who was rocketed to stardom with her performance here, that really goes through the biggest journey over the course of the movie. Knightley moves from well-mannered but curious lady of upper society/damsel in distress to a strong fighter and smart player of the pirate game. While being a striking presence and mature in demeanour with a tall figure, alert eyes and enviable cheekbones, it’s the spirited energy of a woman not wanting to be apart of a stifling status quo that Keira Knightley brings which sells the part of Elizabeth successfully here. On stellar form as well is the reliable Geoffrey Rush, who is delightfully tongue in cheek yet bristling with a creepy menace. His scenes with Depp are delightful as sworn enemies sparring with both swords and wits. Jack Davenport nails the duty bound honour of a man married to his job and enjoying being the bus, but not quite succeeding on the romance department. Jonathan Pryce has the right elder statesman presence as Elizabeth’s elderly father whose biggest concern is the fate of his daughter in all of this. Kevin McNally embodies the person with the most sense of loyalty, first mate Gibbs. He’s both a hoot and a source of calm among all the chaos around him. The devious pairing of Lee Arenberg and Mackenzie Crook as two of the cursed pirates by the names of Pintel and Ragetti, who are prone to all sorts of trouble is also a source of humour, particularly Ragetti. He has an eye that never seems to stay in place and is found often popping out at the most inappropriate times, causing much in the way of slapstick that both actors play too.

Rip-roaring, gloriously riotous and a whole barrel of delightful action, Pirates of the Caribbean: The Curse of the Black Pearl is the definition of a fun time at the movies. For adventure and thrills, look no further.

17 thoughts on “Pirates of the Caribbean: The Curse of the Black Pearl”