Often forgotten in the wide spectrum of Disney movies and more frequently than not misunderstood because of its willingness to be dark, The Black Cauldron is in fact a rather excellent animated fantasy film.

In the mythical land of Prydain , Taran( Grant Bardsley) is a teenager who works as an assistant pig keeper with his guardian, the wise Dallben . Taran is a dreamer with ideas of being a warrior, but is often naive and foolhardy. 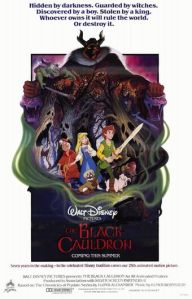 One of the pigs he takes care of by the name of Hen Wen gets special attention, which Taran doesn’t understand at first. Though it becomes clear why Hen Wen is treated with such care when Dallben reveals a secret to the curious teenager . Hen Wen has the power of clairvoyance which puts her in a dangerous predicament. The ruler of Prydain is The Horned King( John Hurt), an evil demon who has his eyes set on discovering the mythical Black Cauldron. If he gets his hands on it, he can raise an army of the dead that will aid him in truly taking over the world.  fears that The Horned King would use Hen Wen to unearth The Black Cauldron and act out his diabolical plan for domination. sends Taran into hiding with Hen Wen, but Taran’s immaturity leads to Hen Wen being kidnapped by The Horned King’s minions. It’s up to Taran to rescue the pig. After infiltrating the castle inhabited by The Horned King, Taran helps Hen Wen escape but himself is captured. Thankfully along the way, he meets a host of characters who either aid him in his journey to stop the barbaric villain. There is the plucky Princess Eilonwy(Susan Sheridan), washed up and unlucky bard Fflewddur Fflam( Nigel Hawthorne) and unusual, fawning creature Gurgi( John Byner). Throw in dragon like creatures, three marsh witches and a group of underground fairies and the stage is set for adventure.

There’s a rather epic feel to The Black Cauldron that’s reminiscent of The Lord of the Rings, and the two share a few similarities. A certain grandeur is here that adds levels of majesty for what it a film that’s really overlooked. I hope with this review I can bring The Black Cauldron to more notice among movie fans. While underrated, The Black Cauldron is far from flawless. At points, the tone can get a little scattershot and not quite know what to do with itself. Plus, some of the attempts at humour fall a bit flat and feel old hat. The story itself is standard swords and sorcery, but that shouldn’t be held against it because this movie is unabashedly dark and not afraid to be strangely mature and horrifying. Overall though and despite little foibles, it’s an undiscovered dark gem of a film that deserves a second chance and a new audience to appreciate what it was going for. The small quibbles shouldn’t detract from a Disney film with an overt difference and one that is often forgotten. When it goes for the creepy and menacing factor it definitely succeeds, due in no small part to the beautifully eerie animation and particularly The Horned King.

The colours are moody and more subdued than most of Disney’s output, but is technically beautiful in their bleakness and sense of foreboding, with just enough light to bring hope. Scary and unnerving sequences abound in The Black Cauldron, it was after all the first animated film from The House of Mouse to revive a PG certificate upon release. Chief among the spooky and nightmarish scenes is the army of the dead. Anyone who has seen the film knows exactly which sequence I’m referring to and it still holds up as very disturbing and visually dazzling and dizzying. I’ll admit, The Black Cauldron is one of my favourite Disney films and mainly because it had the idea to go for something more grown up and not just pandering to little kids. The great Elmer Bernstein contributes a soaring, moody and wholly appropriate score that fits the fantasy like a glove. When the score hits the eerie heights, it’s really a thing of chilling beauty that doesn’t ignore the more rousing elements of the film.

A voice of largely English and upper crust voices bring their characters to life, though sometimes it can be a little too posh.

Grant Bardsley is appropriately curious, adventurous and scrappy as our hero, while the soft voice of Susan Sheridan provides warmth and courage to the Princess Eilonwy. Nigel Hawthorne brings out distinction and humour as the bumbling bard swept along on the journey after being rescued from the dungeon; his voice is a case of it being amusing that he speaks so well and is so unlucky. John Byner uses an eccentric yet lovable voice to give life to the wild creature of Gurgi, who more often than not speaks in rhyme. He really gets the ups and down of the character well, showing both a cowardly nature and a growing loyalty. The voice you’ll remember the most though is the deep, gravelly tones of John Hurt as The Horned King. His voice booms with a menacing aura of authority and is truly spine chilling to hear. Without him as the voice, The Horned King wouldn’t work as a truly evil villain. Thankfully, the voice of John Hurt truly brings the monstrous demon to life to honestly scare the living daylights out of the viewers.

While immensely dark for a movie from a company marketed towards children, The Black Cauldron is definitely that but also a rousing fantasy adventure that maybe quite mature and shocking but has enough to make it a film that needs some re-evaluation.

12 thoughts on “The Black Cauldron”