Based on the novel by Neil Gaiman, Stardust is a lavish fantasy of tongue in cheek humour, surprising darkness and a feeling of adventure that can’t be denied. Boasting a game cast and some dazzling scenery/visuals, it’s hard not to be swept up in this movie.

A rural England town known as Wall is bordered by a giant wall that divides it from the magical kingdom of Stormhold. No one is supposed to go through the portal in the wall and it’s guarded by a man who refuses entry, though one man did and met a beautiful woman who he had a passionate romance with. 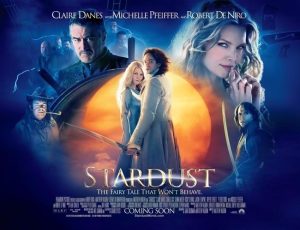 Nine months later, his son is brought to his doorstep with no sign of the mother. The boy grows up into Tristan Thorn(Charlie Cox), a good-hearted but clumsy man who has a big crush on local beauty Victoria( Sienna Miller). The problem is his love for her is unrequited and Victoria is a selfish and vain woman who enjoys stringing others along. Tristan remains undaunted in his attempts to woo her and this is where things get interesting. In the Kingdom of Stormhold, the old King( Peter O’Toole) is dying and he hasn’t appointed a successor out of his sons. Usually, it’s the last man standing who takes the crown but the King decides to freshen things up a bit. He decrees that the first of his three remaining sons who retrieves his ruby will be crowned. The King throws it into the sky where it hits a falling star. The star is seen by Tristan and Victoria, and the capricious Victoria asks Tristan to retrieve the star to prove his devotion before a deadline. If he succeeds in retrieving the star, Victoria will accept his hand in marriage. Bowled over by her, Tristan naturally accepts the challenge. Little does Tristan realise how far reaching and eventful his quest will be. The biggest surpise is once he passes The Wall, he discovers that the star has taken the form of Yvaine( Claire Danes). She might be a radiant beauty but her personality is feisty and she immediately clashes with Tristan. Both begin to warm up to the other as forces of greed and desperation chase them. The remaining and power hungry princes Septimus( Mark Strong), Tertius( Mark Heap) and Primus( Jason Flemyng)are in hot pursuit, followed by an amusing Greek chorus of deceased siblings. Most evil and menacing of all are witch Lamia(Michelle Pfeiffer) and her siblings, who are fixated on gaining eternal youth of which the star can provide. Lamia in particular is a ruthless being of great power and cunning, who is not to be tricked with once she sets her sights on something. Tristan is thrust into a dangerous adventure to save and get back to The Wall before Victoria’s deadline. But in between dodging death and mischief, Tristan starts to see that maybe Victoria isn’t the girl for him as he develops feelings for Yvaine along the way.

Matthew Vaughn is on hand for entertaining and dazzling direction, with oodles of style and adventure. He’s a director who knows how to keep a story spinning and very exciting, most evidenced once the breathtaking fantasy elements begin. The script is very successful at placing us in the fantasy adventure of the piece while retaining a certain sense of off the wall sheen. Stardust boats a sense of infectious craziness and off kilter magic that marks it out as something different in the fantasy genre. For while it’s very amusing and playfully silly, these are balanced with some rather creepy and sinister moments that are not quite what you expect but add to the overall appeal of Stardust.

It is for my money, a film that will appeal across the generations of viewers that see it. With its humour, romance, darkness and thrills, it’s a true delight of a film that transports you into a zany world for two hours. Oh the humour scale, there are a lot of knowing winks to the audience and some fairly naughty jokes that grown ups watching can appreciate. The locations are breathtaking with mountains, hills and that romantic feeling of a hero’s journey on full display for the viewer. The magic is rendered with fun and panache in the effects department, ensuring a film that’s lovely to look and have a good time with. The only flaw I can find is that there is often so much going on that you can lose focus on the events happening. I mean I like when there are various parts to a story, but there are moments when Stardust overdoes it a bit. I’m grateful however that this is the only niggle I have because the rest of this fantasy make up for it. When the three stories gel, Stardust really hits great heights of intrigue and fantastical fun. The score from Ilan Eshkeri matches the heart, romance and adventure of the film and is pretty beautiful/magical in parts too. And Take That provide the irresistibly catchy “Rule the World” to Stardust, which is hard to get out of your head once your eyes have heard it.

A sensational cast is on hand and all up for a fantastic time. In the lead, Charlie Cox is ideally suited for the main hero thrust into the biggest adventure his life has experienced. Cox is fresh faced, personable and full of charm which goes a long way in playing the hero of our narrative and endearing him to us. Claire Danes has an ethereal glow that aids her in playing the personified star Yvaine, while infusing her with a temperamental personality that softens beautifully once her and Tristan get to know each other . Yvaine be the character everyone is after but she is dar from a simpering victim which is fully embodied by a radiant and bristling Danes. The pair have a very entertaining chemistry that sizzles and enthrals.

Standing out and having an obvious ball is Michelle Pfeiffer, who longtime readers know is one of my favourite actresses. She’s relishing playing the lead witch hellbent on getting her youth back and doing it in despicably, delicious fashion. Pfeiffer hits the evil and seductive notes wonderfully, while embracing an eye rolling layer of comedy. It’s a great performance from Michelle Pfeiffer who proves to be a dastardly adversary for our hero but one who’s having a full on blast and savouring this opportunity to play bad to the bone. Robert De Niro has some great comic moments as a space pirate, which finds him playing against his usual image of macho and forceful tough guy. Jason Flemyng and Mark Heap are two of the greedy brothers after the star, though it’s the reliable Mark Strong, on sneering form, who stands out the most as the ruthless brother desperate to be king. I’m not the biggest fan of Ricky Gervais but he’s passable enough as a wheeler dealer. Sienna Miller is effective in her small role as the girl who knows the power of her looks and how to use them to her advantage, which inevitable sets the story in focus. Peter O’Toole contributes an entertaining cameo as the king who sets in motion the quest everyone ends up on before he dies. And on narration duties is Ian McKellen, whose iconic and distinctive voice is richly used.

So while it is occasionally overstuffed with too many ideas and story, Stardust remains a delightfully different fantasy film with quite a bit going for it.