A well directed action thriller that isn’t breaking any original ground but at the same time isn’t trying to, The River Wild has tension, great scenery and fine acting headed by an athletic Meryl Streep.

Gail Hartman( Meryl Streep) is a history teacher for the deaf who used to be a river guide along the rivers of Idaho. She still occasionally practices something similar, albeit in Boston and with no sign of danger or adrenaline rush.

Gail is married to the distant Tom(David Strathairn); a constantly busy architect who spends more time on his job than being there for his wife and kids, in particular Roarke( Joseph Mazzello). The young boy resents his father for never being around and believes that his approaching birthday will be another when his father won’t show. Gail takes Roarke to Idaho for some white water rafting, Tom surprisingly tags along but their journey down river is still awkward as Tom doesn’t know how to connect with his family. Along their journey and as Gail tries to repair her strained marriage, they come across charming Wade(Kevin Bacon) and his friend Terry(John C. Reilly) . They are having trouble navigating the river and are pretty ill prepared. Gail starts to help them, which causes them, especially in the case of Wade, to become closer to Gail and Roarke. Gail enjoys the company of someone she sees as needing help and being likeminded. Roarke finds someone to talk to in Wade, in comparison with his staid father who he doesn’t have the best of relationships with, stemming from Tom’s frequent absence and dedication to his work. Though they are friendly at first, the fact that Wade and Terry keep popping up along the river alarms Tom and later Gail, as does some questionable actions like spying on Gail and Tom when they briefly wander off and being cagey on the reasons they are on the river. A reconnecting Gail and Tom decide to ditch Wade and Terry as subtly as possible after becoming increasingly alarmed by the duo.

Just as try to escape with Roarke, they are violently stopped by Wade, who begins to show his cruel and nasty colours . It transpires that the duo have robbed a large sum of money and to evade capture decided to go down the river. They really hadn’t thought their plan through very well as Wade can’t swim and they must advance further than The Gauntlet to get away. The Gauntlet is a death defying set of rapids that adventurous Gail went through in her youth, but it has since been declared too dangerous following a death to one rafter and paralysis for another. Threatening the family, Wade forces Gail to take them to The Gauntlet, despite her warnings of its impending doom and how barely anyone makes it out alive. The family is separated after a scuffle between Tom and Wade. Tom, beginning to shed his image as a boring, corporate drone goes ahead on foot through the wilderness, hoping to figure out a way to ensure the safe return of his wife and son. But just how long can Gail protect her son and herself from danger as treacherous water lies ahead? And can Tom catch them up and derail Wade’s deadly plans?

Curtis Hanson efficiently brings out the adventure, tension and drama at the heart of The River Wild with considerable skill. The story may seem familiar and some beats that you’re well aware of take place, but Hanson has you glued with his direction. He knows it’s all in the mounting of tension and then letting things take flight, complete with some surprises. The use that the family has of sign language is an inspired choice that allows them to communicate in a way unfamiliar to their kidnappers and wonderfully succeeds in being in the family back together in crisis. 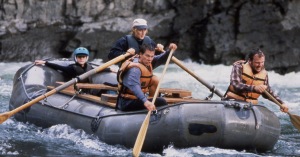 The first part of the film is all in the build up that effectively introduces terror through little hints that take on greater meaning once the kidnapping and forcing to help begins, the big set pieces come. And they are spectacular scenes as the beautiful yet treacherous landscape is observed( in a stunning showcase of cinematography) as a race for survival ensues. Though not every part of the story works and it can smell of contrivance, the overall content is pleasingly action packed yet has some emotion to make a difference. For a movie conveyed with action and thriller elements, The River Wild doesn’t scrimp on character development or getting us to know the central players in the story. There’s already some tension before anything truly suspenseful happens. The family unit is already falling apart and thankfully being well observed, while resisting the urge to go into full on soap opera on water territory. Jerry Goldsmith is on score duties and his skill in dripping suspense in is key to the atmosphere here; along with sneaking in some gorgeous pieces of moving symphony to compliment the lush surroundings about to be overtaken by nail biting tension.

The acting is of a high calibre it must be said. Heading things is the ever impressive Meryl Streep flexing a sense of physicality we are not used to from her while retaining a humanity that grounds things. 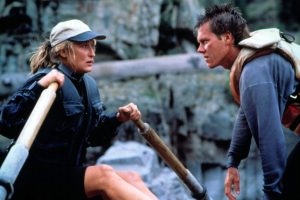 Streep is a force of nature; glowing with a radiance and an intimidating stare, coupled with protectiveness, vigour and freedom. Simply stated, Meryl Streep is the driving force behind The River Wild with a dedicated role that shows off her dedication to her work, a great physical presence of toned arms and legs and how she can slot easily into any genre like the true professional she is. Projecting evil and oozing dangerous charm is the talented Kevin Bacon, whose boyish appearance is used to great effect in masking the true depravity and violence of his character before letting it out. Bacon just really knows how to unsettle here as he plays games with the other characters and tries to really get inside their heads. His frequent clashes with Streep are a highlight as they face off wonderfully in a thrill ride of a movie. I always enjoy seeing Kevin Bacon in a film and in The River Wild it is no exception. Also very strong here and an actor that I feel is often overlooked is David Strathairn, who is superb as the absent father forced into action. Strathairn gets the sense of a man too wrapped up in his life that he’s become desensitised to everything important to him and also credibly charts his rise to being a reliable thinker and survivor.

Once Strathairn is separated from the others, his journey begins and its pretty great to see him change so realistically and excellently from a boring workaholic to quick thinking and unrelenting in his hope of saving his family. Its a classy turn from the gifted David Strathairn. John C. Reilly shades his supporting role as lackey with some nice grey areas, while Joseph Mazzello plays the plucky kid with the right amount of spirit and hear.

For my money, The River Wild is an underrated action/thriller that is spearheaded by a sensational Streep and generates some real excitement. By the numbers as sine of it is,

14 thoughts on “The River Wild”