A hilarious and thrilling murder mystery, updated to the present and sporting one hell of a talented cast, Knives Out finds Rian Johnson at some of his most skilful and fun.

Harlan Thrombey( Christopher Plummer) is a wealthy but ageing crime author who is celebrating his 85th birthday. His wide, extensive family, of whom most are greedy, are there at his county mansion for the occasion.

There is Harlan’s children; gloating businesswoman Linda( Jamie Lee Curtis), uneasy and timid until he has a drink inside him Walt( Michael Shannon) , plus Harlan’s bitchy, self-serving daughter in law Joni( Toni Collette) and her put upon daughter Meg(Katherine Langford). There’s also Linda’s crude husband (Don Johnson), and their man-child brat of a son Ransom( Chris Evans) , plus Walt’s troll child Jacob( Jaeden Martell) who delights in being a nasty young man. Most importantly, Harlan’s nurse Marta( Ana de Armas) is present but treated suspiciously by family when others aren’t looking, though they claim to hold her dear. The next day however, Harlan is discovered with his throat slit, the apparent result of a suicide. Two cops, Detective Lieutenant Elliot (Lakeith Stanfield) and Trooper Wagner( Noah Segan) come to investigate as their soon becomes evidence of foul play afoot. Also on the case, after being mysteriously tipped off about it, is seasoned detective Benoit Blanc( Daniel Craig). He’s an investigator with his own way of doing things that often baffles others but often turns up intriguing possibilities. Sure enough, he sets about investigating and comes to believe that cruel intentions where at work in the demise. Marta, who seems to be the only person who treated Harlan like a human, has a condition where if she tells a lie, she vomits. This immediately puts her as an ally to the side of good or does it as this is one case in which nothing is what it seems? Blanc continues to investigate as the family fights, bickers and basically tears each other apart as they all want a part of the fortune. Marta is the one person who doesn’t seem interested in the money as she valued the companionship and respect she shared with Harlan. What spins out from all this is a most twisty case involving one hell of a dysfunctional family.

Rian Johnson is the man behind the camera and the pen and in both capacities, he doesn’t disappoint with this film. The sharp, scintillating script of cracking one liners and genuine mystery. Rian Johnson is clearly having a blast both paying homage to the murder mystery movies of yesteryear and giving it a contemporary update that is most entertaining. I find it hard to fault when someone is directing and crafting with this level of giddiness and panache. Though it covers many of the genre tropes we know and love, the underlying humour and knowing meta references to all matter of murder mystery TV shows and movies are most welcome and pretty cool to spot.

Plus, Knives Out has a brilliant sense of mystery and unease as we try to discover the cause of untimely death for Knives Out truly breathes new life into the genre, and still has time to make comment on immigration, greed and the accountability of family. Thankfully none of this is overbearing or ham fisted, rather it is presented in a manner that flows along with the central mystery and just as entertainingly. Some lulls in the proceedings, (like the film maybe benefiting from a bit of a trim and certain characters not being given much to do) can be forgiven mainly because Knives Out twists and turns us and our expectations. It’s by and large a surprising film that breathlessly speeds along and misdirects you just when you think you’ve got a handle on it’s mystery. It’s a damn fine time that is purely entertaining and keeps you glued. The setting of the house is ace; with the large breadth of the domain and the various ways it is majestically shot with a certain old fashioned flair, really adding to the overall atmosphere of both lightness and darkness but never too overpowering as to detract from the crackerjack script. Plus, I can imagine that upon repeat viewings of Knives Out, you’ll notice something different each time. The music is a scintillating addition, with erratic strings and gorgeous piano conveying the craziness and underlying depth of the piece. Simply sensational is what the score from Nathan Johnson is .

Where Knives Out really hits the jackpot is in the talented cast. Daniel Craig heads up events with a thoroughly hilarious and eccentric turn as the celebrated detective mysteriously on the case. Using a surprising but superb Southern drawl and immensely kooky humour, Craig is having a ball and is one of the big standouts in Knives Out. 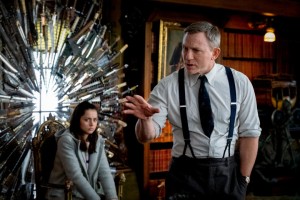 Seriously, Craig is fantastic here in a role very different from Bond especially in its ability to be sharp as well as flamboyantly tongue in cheek . Matching him with a quiet dignity and decency is Ana de Armas in a role that is a showcase for her considerable talents. With her angelic face, arresting eyes and intelligent authenticity, de Armas is gifted a peach of a role and creates the beating heart of the narrative. Also, she blends areas of mystery within the part that still keep us guessing of her true involvement, though she’s definitely what you’d call the moral centre of Knives Out. I feel like de Armas is an actress of great promise if her work here is anything to go by and I hope she gets more successful roles like this one.

Chris Evans, playing very much against type, relishes being a nasty but hilarious piece of work who provides much in the way of snarky comedy and bratty, entitled antics. He gets some of the most scintillating lines to be found in Knives Out.

Toni Collette, who has long been an actress I adore for her versatility, does it again as the vapid, shallow and grasping lifestyle guru who loves to brag about how great her life is. Collette bitches it up as this venal harpy who disguises her nastiness with a coy smile. Also getting some catty one liners and displaying a sense of authority under scrutiny is the ever excellent Jamie Lee Curtis( her comic timing and very sharp-witted presence is sparky and scene-stealing). Michael Shannon also has a lot of presence as the son who feels cit out of the family because of his weaknesses and inability to do things right. We feel some sympathy for the man who feels overlooked in the early scenes when Shannon gets to a level of morality, but Shannon truly comes alive when he’s required to be mercenary and underhand. Don Johnson creates a character of smarmy nastiness and underhand nature, who forms yet another snippet of a viper’s nest that is family.

Unfortunately, Jaeden Martell and Katherine Langford are both saddled with roles that don’t amount to much in the same way the two cops( Lakeith Stanfield and Noah Segan) are largely filler and fail to stand out in an all star cast. But hell, that’s what happens when you have a big ensemble cast to contend with. And none of them are bad, just not utilised effectively. Veteran actor Christopher Plummer, whose very resume is enviable, still shows fantastic talent and fun in the key role of Harlan. We are shown a shrewd, cunning but generous to those who deserved it kind of man. His impact is felt as the story continues following his seemingly untimely demise.

Boasting one cracking ensemble of actors, a director on sizzling form and suspense mingling with laugh out loud comedy, Knives Out is a sly, devilish treat that gives an old genre an upgrade with results that would please the Grande Dame of Murder mystery, Agatha Christie.

12 thoughts on “Knives Out”