A mostly engrossing apocalyptic drama/ thriller with religious and mystical overtones, The Seventh Sign didn’t do good business on its original release. But while it is flawed, there is also plenty to praise in this imaginative film that has a gloomy yet hopeful tone and a convincing central performance from Demi Moore.

Around the world, strange phenomena is occurring. In Haiti, all marine life dies in the ocean. In Israel, a desert village that was seized by terrorists is found covered in ice. Meanwhile, in Venice, California, Abby Quinn(Demi Moore) is a young woman who is looking forward to giving birth in two months. 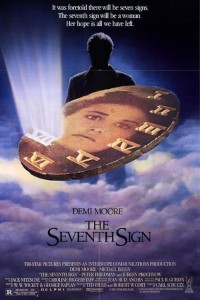 She is supported by her decent and hard working husband Russell(Michael Biehn), but she can’t shift feelings of terror as result of an unsuccessful first pregnancy. She’s also been experiencing vivid dreams of ancient times in which a man is struck across the face and asked “Will you die for Him?” Abby and decide to rent out their garage apartment, while is currently on a court case defending a young man with Down’s Syndrome who killed his incestuous parents and claims it was the will of God. The lodger they find is named David(Jürgen Prochnow), a quiet man who seems to know things before they happen and things he couldn’t possibly know. The thing is he is the man who has been present at each of these disasters and is the instigator who breaks the seals that start them. It becomes apparent that the unusual events around the world are part of a biblical apocalypse. There are seven signs referenced in the holy book and David seems to be the bringer of them. His presence begins to unnerve Abby and with more unusual portents of the apocalypse swirling around, she becomes fearful for the life of her unborn baby.

It transpires that everything is somehow linked and comes back to Abby and her baby. Around this time, a mysterious priest, Father Lucci(Peter Friedman) appears, having followed the signs and his means may not be that altruistic. Abby confides in Avi( Manny Jacobs) a Jewish student training to be a rabbi, who is familiar with religious texts and helps her to unearth more of the apocalyptic future. But can Abby figure it all out before chaos reigns and her baby is born? And just how does her and the baby she’s carrying slot into the end of the world?

Carl Schultz directs as efficiently as he can and fashions out a fascinating thriller, with deep religious overtones . Certain areas of it require work, but Schultz gives it his all with the material. Visually, the moody cinematography is sublime at bringing a level of gloom into proceedings and a strange mystical aura hovers over it. The Seventh Sign is overall a very creepy film that’s also surprisingly deep in regards to the Apocalypse. It grounds the fantastical events and signs in a real world setting that is truly well executed and not without thought.

Biblical prophecy and some elements of Jewish religion and mythology are what keeps The Seventh Sign really going. The sequences of destruction are memorable and unnerving( the blood red moon and a climactic earthquake are highlights , while not going full on overboard with effects). Saying this, I would have preferred if the film had a bit longer on the running time as it may have fleshed out the story even more and elevated it to masterful. As it stands, The Seventh Sign is still a watchable mix of religious drama and supernatural thriller. Mystery is kept reasonably high as Abby attempts to decipher visions and omens in order to save her baby from something she thinks is sinister. The liberal helping of confusion and reason may be here, but The Seventh Sign still holds your attention, despite the logic sometimes lacking for my liking. The hopeful colouring to the film redeems a bit of it with a certain message of hope stirring emotions. I very much enjoyed the Gregorian chanting and synths of the score by Jack Nitzsche. He is skilled at really bringing out that unusual side to the movie through his music and I for, genuinely liked how effectively used it was.

At the heart of The Seventh Sign is Demi Moore with a moving portrayal. She’s got a certain relatability to her here that goes a long way in earning audience sympathy.

We witness her frightened mind and burgeoning realisation at the dark situation at hand, with Moore beautifully getting across her desperation and confusion with aplomb. Moore ensures that we emotionally attach ourselves to Abby and her journey into the unknown as the End of Days rages at her door. Her eyes have a deep sadness and vulnerability to them that is often on display in gorgeous close up, but it’s a bubbling strength and bruised resilience that truly shines through for Demi Moore. Simply stated, Moore is the lynchpin and emotional core of The Seventh Sign that is what sticks in the mind after the credits. Michael Biehn is fine as the supportive but concerned husband. The role isn’t much of a stretch but Biehn plays it well. Jürgen Prochnow, of intense face and strong jaw, brilliantly plays the dichotomy of David. He’s both incredibly menacing yet never in your face, but then deceptively gentle and knowledgeable. It’s a fine balancing act that he pulls off admirably. Also on the talk of dichotomy, Peter Friedman, though he appears late, is also a good example of walking between welcoming and very creepy. Manny Jacobs is suitably knowledgable as the young student that Abby comes to rely upon.

A flawed film that could have benefited from a bit more on the running time to really get to the nitty gritty of it, The Seventh Sign is nonetheless a very entertaining and unusually thoughtful film.