Inspired by the real life story of Lizzie Borden, who was accused and then acquitted of the murders of her father and stepmother, Lizzie is a tense psychological drama that puts its own spin on what drives someone to commit murder and it’s own turn on whether or not it believes Lizzie was innocent or guilty.

It is 1892 in Fall River, Massachusetts and Lizzie Borden( Chloë Sevigny) is a woman living under the tyrannical eye of her penny pinching father Andrew( Jamey Sheridan). 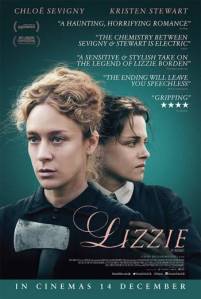 She’s an independent woman who is different from the subservient kind of lady that was expected at the time and one who in subdued but defiant fashion, scoffs at the system around her. Lizzie also experiences violent seizures, which her father believes is a form of attention seeking. She’s not helped by her stepmother Abby( Fiona Shaw), and her sister is Emma( Kim Dickens) sweet but unable to stand up to. Lizzie is locked in a constant war with her father, with the threat of being sent away to an institution always hanging over her. Into the gloomy household comes the innocent Irish maid Bridget( Kristen Stewart). She’s a bit naive, illiterate and just trying to get along in life with what she’s got. takes a sickening liking to her and starts to visit her room nightly so he can sexually abuse her. Bridget is too terrified of losing her job that she doesn’t tell anyone, but Lizzie finds out. She also discovers that her father has been scheming with her nasty uncle John(Denis O’Hare) something dishonest and underhand about inheritance. Both things infuriate Lizzie and her independence in life and further cause tension with her horrible father. Growing closer to Bridget, the two women form a romantic relationship. It proves to be a solace from the grimness of their lives, but soon discovers it.Soon things reach a head for everyone which results in gruesome death and a trial that involves all.

Craig William Macneill ably directs this film with a keen sense for atmosphere and content. His concentration is largely on the accused Lizzie Borden and her fiery independence in the face of restrictive times that were governed by the patriarchy. His. keeps events very on edge, making the slightest of changes or events matter in the grand scheme of things. Macneill employs an almost unbearable level of tension within the confines of a household; eliciting a claustrophobic aura that transfers to the viewer. Unlike other movies about murders that are still debated and explored, Lizzie takes the side of the allegedly murderous Borden and unravels what might have drove her to commit the crimes she was charged with and then acquitted of. It sets off the dark family angle; all stifled emotions and the overarching tyrant of a father desperate to exert control over the largely female household. 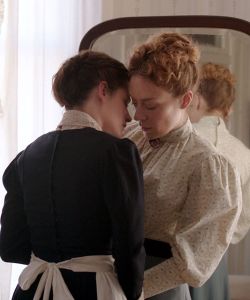 Lighting is a key element of Lizzie; either blindingly bright in a beautiful manner(for when Lizzie and Bridget find passionate escape from life) or for the most part shadowy and within the confines of an austere home where emotions struggle to stay under wraps. An up close camera that often lingers on faces and events, while occasionally becoming unrestrained, is employed to capture the burning desire to break free that Lizzie has and how both she and are hemmed in by a society that believes it’s already chosen their destiny. There’s nary a wasted shot in the film and that’s down to the and the cinematography of Noah Greenberg, who are very in sync with what they want from this project. The music, with its high peaks of near horror influenced strings and pulses, keeps things on a knife edge as the day of blood beckons.

Chloë Sevigny is a force of nature as the eponymous Lizzie. She bristles with stoic anger and has an unblinking quality that sets the screen alight. Sevigny has long been an actress I’ve admired and she once more provides compelling viewing with a forceful portrayal of a woman trapped in a time that doesn’t fit and slowly taking devastating action against it. 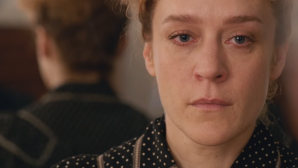 In short, Sevigny is magnetic as Lizzie; discovering a smart woman whose bullied and abused but not above fighting back against it, ultimately in brutal fashion. The ever watchable Kristen Stewart, who for me has matured a lot as an actress over the last few years, is equally as compelling as her eventual lover. There’s a quietness to Stewart here that’s none the less intense and waiting to be unleashed, as her green outlook is changed and she finds strength within herself thanks to Lizzie. Both ladies have a palpable chemistry that provides the centre of the narrative and truly the main respite for these two women. Kudos to both Sevigny and Stewart for creating such a believable bond. Jamey Sheridan is ideally cast as the powerful, grasping and completely wretched father, who seems to delight in exerting his male dominance over others. It’s a credit to Sheridan that you feel the revulsion shared by Lizzie and Bridget for this man, as he’s just that get at getting under your skin as a completely snake and fraud. And Denis O’Hare, who is one of the most underrated actors out there, sinks his teeth into the part of the poisonous uncle with malice in every fibre of his being. Fiona Shaw manages to be both seemingly vindictive and alternately switched on to events around her; with just a look, we know exactly what she’s thinking.Kim Dickens isn’t really given much to work with but is pleasant enough in her small role.

A chilling yet eye opening drama with an emphasis on the psychological and fine acting, Lizzie is a fresh spin on the infamous murders that finds its fascination with events behind the scenes and their devastating impact.