Danny Boyle directs this warmly engaging tribute to the Beatles and the journey of love in a film that’s inviting without being cloying. Yesterday is the definition of a feel good movie.

Jack Malik(Himesh Patel) is a struggling young man whose passion is singing but whose never had success. 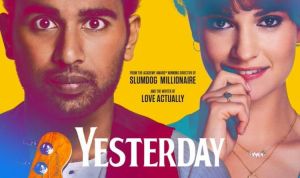 He’s beginning to see that it might be the end of the road in Lowestoft as he’s not amounted to much. His best friend and manager Ellie( Lily James) attempts to sway him into not forgoing his dreams as she believes in him. This is coupled with the fact that she is desperately in love with him, though Jack has never noticed it. He is on the verge of giving up when something unusual happens. He’s riding home on his bike one night when a global power cut ensues and coincides with him being hit by a bus. Thankfully, he lives and though injured will recover. But once he comes around, Jack notices one strange fact about the world around him: no one remembers The Beatles. At first, Jack things it’s a bit of a joke but a few searches online reveal that all knowledge of them has been wiped. This in turn has led to other things not being remembered but the big one is the iconic Beatles. Jack starts to sing their music as if it’s his own to bring it the attention it deserves. This backfires as people assume he has written these classic songs and he starts to become successful. Even Ed Sheeran is impressed and his manager Debra(Kate McKinnon), who worships at the altar of greed and business, snaps Jack up. Soon he’s famous for singing these songs, but struggling with his own feelings of guilt that started off  as him trying to be good. Yet just how much longer  can Jack live a lie? And what of his relationship with Ellie, who obviously loves him?

Though it isn’t the first film to come to mind when I think of Danny Boyle’s directing, Yesterday shows him in mellow but touching mood. His eye for detail is very much on show with canted angles to signify the world being upside down for Jack and some pretty groovy transitions.

Thinking on it, of late the underdog story has featured in Boyle’s films, only this time there’s a lot more laughs that show the director having fun. It’s aided by a winning script by Richard Curtis that mixes sarcastic humour and life-affirming love. Curtis often features lovable losers in unusual circumstances or being tested and Jack is no exception. The observations of what might have been without The Beatles are both funny and reflective, particularly in the last third where things get somewhat poignant. There’s a what if angle to a lot of Yesterday that’s delightfully daffy yet retains an emotional impact. And there’s a neat little unexpected twist that is very intriguing not to mention surprising. But because I’m a good guy, I shall not spoil it. Yesterday is t perfect and some areas seem overly familiar, but from an overall viewpoint, it’s a very nice experience and one that will leave you smiling.  Hearing the music of The Beatles is always welcome to my ears and hearing them performed with zeal and resonance in Yesterday is splendid. And I can’t not mention the romance of this film, which is tentative at first but eventually blooms as Jack realises just how important and loyal Ellie is to him.

Himesh Patel, who is best known for starring in Eastenders, is superb in the lead role of sympathetic Jack. Though his actions get him in trouble, he’s a character who tries to do the best and Patel brings that out of the part with a combo of subtlety and comedy. I hope to see in more movies as he’s really got potential as an actor. And I can’t forget his singing, which is also worthy for praise. 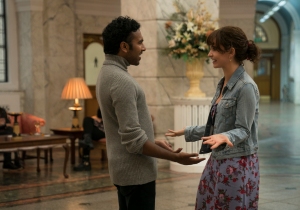 Alongside him is the luscious Lily James, who is steadily becoming a very reliable actress. Her quirky mannerisms, winning smile and downright adorable nature are on full display for a lovely performance. You can’t help but fall in love with Lily James here. Ed Sheeran shows he’s not afraid to parody himself with a tongue in cheek role as a version of himself. I must say he does elicit quite a few laughs. Speaking of laughs, Joel Fry contributes fine humour as Jack’s right hand man whose not the brightest person, but who’s goofy heart is very much in the right place. On the other scale of laughs is Kate McKinnon who is simultaneously a ruthless bitch after money and an unhinged hoot The balancing act is effectively walked by McKinnon who is obviously revelling in being devious.

Capitalising on a strange but impressive premise and directed with skill by Danny Boyle, Yesterday is a charming, thoroughly enjoyable film, enlivened by the music of the Beatles and work of Himesh Patel and Lily James.