With Freakshow emerging as my least favourite season of American Horror Story, my expectations were high for Season 5. Thankfully, though not without some flaws, Hotel is a resounding success of horror, style and game acting. Be warned, spoilers may follow in this return to form for the show.

John Lowe( Wes Bentley) is a Los Angeles detective on the edge; he’s estranged from his doctor wife Alex(Chloë Sevigny) and on the hunt for a brutal serial killer who murders victims in accordance to The Ten Commandments.

Plus he is haunted by the disappearance of his young son Holden years prior. He feels responsible for the disappearance and this is what he has to live with every day. One day he is given a tip off that his answers can be found in the Hotel Cortez. A glamorous yet run down establishment with a history of horror, it soon pulls John into its depravity and history of death. The owner of hotel is the fabulously dressed and very mysterious Countess( Lady Gaga). She is a vampire like creature infected with a virus that leaves the sufferer craving blood. Her companion of late is the handsome Donovan(Matt Bomer), who she goes hunting with. She was the one who took Holden as well as other children who she turns into creatures like her in order to create something of a makeshift family. She is a fearsome creature, but is secretly hiding her true self and tragic past. The Countess finds her head turned by volatile male model Tristan( Finn Wittrock) , which enrages Donovan. Also in her sights are the soon to be owner Will Drake( Cheyenne Jackson), a fashion designer who doesn’t realise he’s part of a scheme to get his money. There’s the ghost of James Patrick March( Evan Peters), the founder of the hotel in the 20’s, who turned the place into a murder palace and was helped by the ever loyal, cleaning fanatic Miss Evers( Mare Winningham) . On front desk there is Donovan’s surly mother Iris(Kathy Bates) who longs for a relationship with her son and Liz Taylor( Denis O’Hare), a transgender bartender who seems to see everything and everyone. Also traipsing about the Hotel is the ghost of one Sally McKenna(Sarah Paulson), a trashy junkie in a constant state of sadness and mania, who was pushed out of a high window by Iris for getting Donovan hooked on drugs in 1994. Arriving later on the scene is Ramona Royale( Angela Bassett) a former lover of The Countess with a big axe to grind. Everything comes to a head once John takes up residence and gets a lot more than he ever bargained for.

I think straight from the opening, Hotel stands higher than its season just passed. For starters, I found the characters had more flavour and personality than in the last season. Plus, you could connect with many of them too, primarily Liz Taylor and Iris who both convince as outsiders wanting something more in life. And though the story had many different angles and sub plots, it largely worked and it was fun seeing how various threads connected.

Sure, some parts don’t amount to much, but I found it a lot more compelling than which seemed to run out of steam rather quickly. The themes of loss and rebirth form the main crux of Hotel and it was excellent how we watched the characters change and influence one another. Hotel ranks at least in my book as the bloodiest season thus far. As it has done in the past, the blood is shocking and grisly, but definitely used to fashion a twisted delight that scares and compels at the same time. Scenes that stand out for their brutality are The Countess and Donovan slaughtering a couple during sex, a junkie being mercilessly abused by a faceless demon, a corpse rising from a rotting mattress and most shocking, a band of infected children making a meal out of one of their teachers.American Horror Story references some of the best content in the horror genre with style and panache. The crimes of the killer are a stylish homage to Seven, while the hotel of the title takes its cues from The Shining. And I’m a big fan of the flashbacks to March’s mayhem and murderous ways as the show employs a grainy black and white to emulate the time and bring out events in horrifying detail.

As it has done in the past, American Horror Story always succeeds when taking influence from real life events. Here, the hotel is similar to that of the one the depraved murderer H.H. Holmes and the poor fate of the child of chambermaid Miss Evers blends with that of the Wineville Chicken Coop Murders. And the best of all the real world allusions is an episode entitled ‘Devil’s Night’. In it, March hosts a feast for the ghosts of dead serial killers, such as Jeffrey Dahmer, Richard Ramirez, Aileen Wuornos and John Wayne Gacy. An already starting to lose it John finds himself thrown into this horror show and under the influence of absinthe, watches as these killers enjoy their depravity and find merriment in their sickening handiwork. Watch out for memorable work from John Carroll Lynch and Lily Rabe. For some reason, its something that works in the scheme of the show. Visuals are a strong component in the show and Hotel is no exception right from the opening frames. It’s an extravaganza for the eyes and senses that’s for sure and certain. 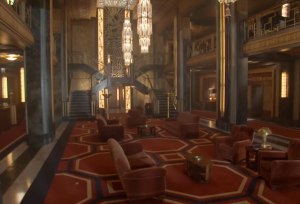 Particularly good is the fish eye lens employed at times that suits the unstable nature of the establishment and turns things into something unusual. I’m not the biggest fan of the overlapping of seasons as American Horror Story was originally billed as an anthology. Though saying that while some of the bringing back of other characters fails, I found the callbacks to Murder House were particularly effective and the return of the medium( also played by Sarah Paulson) in the finale was a very well handled part and one I really liked seeing. And I can’t not praise the production department who pull out all the stops when it comes to design. The Cortez becomes a dark hotbed of violence and style, clashing with each other with reckless abandon. A well chosen soundtrack and electric, humming score add further to the delirious ride through death, horror and story.

The cast surrender to the madness and horror with fantastic results.Leading the cast is the new addition of pop superstar Lady Gaga, who shows that acting is yet another skill in her arsenal.

She plays the Countess as a seemingly aloof being who dresses and lives to kill, but is looking for something more. Her performance is very multifaceted and extremely impressive at showcasing various sides to the character, in particular deep tragedy coupled with ruthless sex appeal. Then we have Wes Bentley, who is suitably intense as the emotionally scarred detective finding himself falling into madness. He just burns across the screen with a vulnerability, quivering seriousness and frightening devotion. Matt Bomer, with his strong appeal and good looks, is ideal as the latest lover in the life of the Countess. He enjoys the position but it has grown a tad stale for him and his resentment starts to form. Plus, when he’s with Lady Gaga, they make a sizzling duo. As the new paramour of The Countess, Finn Wittrock is all scowls and attitude, with a few other layers underneath. Chloë Sevigny, who I’ve always admired as an actress, turns in emotional weight and desperation as a grieving mother who goes to extremes for her son. I liked her arc in this series as she begins as a broken woman and slowly gets in touch with another unexpected part of herself.

The best performances comes courtesy of Denis O’Hare, Kathy Bates , Evan Peters and Sarah Paulson. It’s good to see a transgender character portrayed on television with respect and honesty and Denis O’Hare acts his socks off. From the great one liners through the backstory of the transformation into the person she is today, it’s all played beautifully and sympathetically by the always watchable Denis O’Hare. 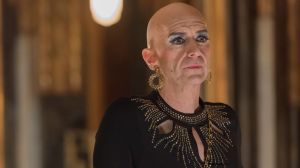 Thankfully in recent times, many forms of media have followed suit by showcasing characters that are transgender and actually treating them with understanding and decency. Long may that continue. Ably complimenting him is the excellent Kathy Bates, who puts in another fantastic performance . Going from dark humour to crushing sadness and then a rebirth, Bates captures the attention with her convincing acting and A Game. The always impressive Evan Peters, playing probably his most extreme character thus far, is electrifying. Mixing a Clark Gable accent with a sadistic hunger for murder, he crafts March as a supreme being of evil that is strangely charming. Peters turns in one of his finest performances in the run of the show. Rounding out the standout quartet is the wonderful Sarah Paulson.

Always seen here with a mournful look( complete with smudged eye liner and the appearance of never ending tears) that also shares itself with a sly underbelly, her portrayal of the messed up Sally is riveting. You really don’t know what you’re going to get with her character and Paulson rocks it. I adore Angela Bassett and how she embraces the outrageousness of the material. She just embodies the sassy, fierce and out there nature of American Horror Story. And even if her character’s arc doesn’t feel well utilised enough, Bassett makes it sensationally watchable all the same. Providing the unusual but also tragic is Mare Winningham as the chamber maid with a love of cleaning. At first glance she’s strange and you don’t know what to make, but Winningham discovers pathos and depth in this woman who could have just been one dimensional. The main cast member who isn’t really given a chance to make an impression is Cheyenne Jackson. I’ve seen him in other things and think he’s a good actor, but he just doesn’t really get a look in here.