I was asked to write a piece by the lovely Gill for her blogathon on Angela Lansbury . I too adore Angela Lansbury and wanted to highlight this by writing about why I love Murder, She Wrote. I’m happy to do this tribute to such a national treasure and mainstay in movies and television.

Here are the reasons why I love Murder, She Wrote:

1. Of Course it has to be Angela Lansbury:

The biggest reason the show is so effective and entertaining is the incomparable Angela Lansbury at the centre of it. 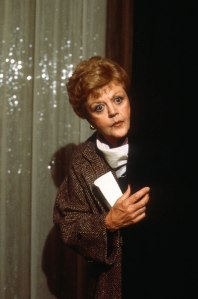 She’s the perfect choice for the role of amateur sleuth and successful crime writer Jessica Fletcher. She blends observational tendencies, gentle humour and moments of deep strength to form this beloved woman who has a nose for murder. Lansbury is so good that it’s impossibke to imagine anyone  else playing the part. I just love how radiant but firm she is and how she is a likeable character. It wouldn’t be successful without the talent of Lansbury.

2. There’s a certain level of coziness to it:

Now that may sound strange considering the show is about someone solving murders, but please let me elaborate. While the content of the show is Jessica attempting to unearth murderers, it has a lightness of touch to it. It’s not dour and overly serious, but rather. Yet it does have strong emotional moments in it, it’s the episodic nature and knowledge that Jessica will succeed in her sleuthing that really makes Murder, She Wrote.

3. The vast array of guest stars:

Sometimes watching Murder, She Wrote is like playing spot the celebrity, given the amount of famous guest stars that have featured on it. From seasoned pros of Old Hollywood to stars just on the cusp of recognition, Murder, She Wrote has them in spades. You’ll be surprised how many big stars had early roles on this show.

But the biggest reason of all is Angela Lansbury who’s incomparable.

15 thoughts on “Why I Love Murder, She Wrote”