The fourth version of a classic story of two careers in opposite directions, A Star Is Born certainly has pedigree. And though some may have scratched their heads at why another remake should be done, I’m sure they’d agree that this version sits up there with the best of them, thanks to what Bradley Cooper and Lady Gaga do with it.

Jackson Maine is a country rock star who has seen better days. Plagued by tinnitus and an addiction to booze and pills, his life is going through the motions.

Drunk and in the middle of touring, Jackson stops in a drag bar. It is here he encounters Ally; a young woman in a dead-end job with dreams of being someone. She’s a talented singer and has a tough personality but is crippled with insecurity over the shallow people in the music industry who have dismissed her appearance in the past. Jackson is immediately struck by her and she is curious too. They grow closer to each other and Jackson helps Ally make a leap for stardom. They fall in love and marry, with Ally being a good influence on Jackson. She eventually becomes famous after Jackson invites her on stage to perform. Despite her initial nerves, she blows everyone away with her voice. Yet as stardom beckons, people want to mould her into something else and as her success soars, Jackson’s falls. Ally tries to retain her individuality, but her pushy manager has her switch her act and lose herself more and more. This causes an immense feeling of jealousy and resentment that has Jackson reaching for the booze and pills again. All of it hurtles towards tragedy for the couple as one career rises and the other inevitably falls.

Bradley Cooper makes a remarkably involving and emotional movie with A Star Is Born. He gets straight to the heart of the material and the themes of celebrity and tragedy with cracking results. 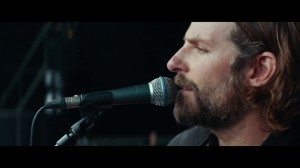 Bradley Cooper turns in one of his strongest performances in his career. Over the last few years, Cooper has steadily become a very reliable actor and a versatile one. Here, with his usually amiable voiced lowered considerably to a growl( and surprising musical chops), he displays such raw anger, sadness and tiredness that is very believable. Jackson is someone who has success but usually doesn’t see it and instead drowns in pity. Ally may represent the light for his safety, but Cooper finds that Jackson is so wound up and dependent on addiction that the once bright spark will eventually go out. Cooper is nothing short of a knockout here and this is extremely excellent work from him.

Any worries that Lady Gaga’s image as a pop star will overshadow her performance are put to rest immediately as we witness her immense talent for acting by drawing on some of her own experiences. We all know she can sing, but here she takes it to another level and rocks us to the core. And her acting is one of the biggest assets of this movie. With personality, strength and vulnerability, she plays Ally tremendously as he feels so real and natural in this film, signifying her skill in this arena. We observe someone growing in confidence but being faced by many trials along the way and it’s played with an authentic and engaging edge. Gaga is at the top of her game with a compelling and sympathetic turn that announces great promise in an acting career. Cooper and Lady Gaga make for an incredible couple as their chemistry is immediate and extremely genuine that we feel the emotional highs and lows of their lives. Sam Elliott, of the moustache and grizzled, deep voice, steals whatever scenes he appears in as Jackson’s aggrieved brother. He’s been there for his brother but has a very fractious relationship with him. Elliott shows him to be the person who says it like it is often bluntly, but ultimately wanting to help his brother in the long run.

An excellent version of a classic story with two amazing central performances and  emotional material, A Star Is Born is strong movie making that has an impact on you. And after watching this excellent version, I’m very tempted to see the other interpretations again.