Expanding on from Margaret Atwood’s novel and opening up the universe created in Season 1, the second season of The Handmaid’s Tale provides immensely disturbing viewing for us. It’s gruelling but so hard to tear your eyes away from it. Caution, spoilers may well follow.

We pick up where Season 1 left off, with a pregnant Offred( Elisabeth Moss)being placed in a van and heading for an uncertain future. As it opens, she along with the other Handmaid’s who refused to stone one of their own, are taken to Fenway Park.

They believe they will be hanged, but it’s a cruel act of manipulation by the powers that be. Thrown into gruelling torture by Aunt Lydia(Ann Dowd), it looks as if it’s more cruelty for all of them. More defiant than ever, Offred takes on the regime with attitude and stays it out in the hope that help will appear. Eventually, Offred is spared as Aunt Lydia discovers she is with child and exempt from punishment. With help from Nick( Max Minghella) , who is the father of her child, and the resistance, she manages to escape from her captivity. Shedding her Handmaid’s life and proclaiming herself as June, she has to contend with knowing that in order to properly escape she may have to leave the daughter she had taken from her.

June may attempt escape to the border, but it’s short lived and she is forced back into becoming the Handmaid Offred. Nick tries to help her but is sidelined by being “gifted” a wife named Eden(Sydney Sweeney). She’s a pious girl and seemingly a true believer for what Gilead stands for, but also sets up events in a tragic way. There Serena Joy(Yvonne Strahovski) is starting to scoff ever so slightly at the regime herself, but is very unpredictable in her attitudes towards Offred/June. Commander Fred( Joseph Fiennes) is his usual hypocritical self and putting on his show of self-righteousness for all to see. Meanwhile, Emily( Alexis Bledel), formerly Ofglen is in The Colonies for her disobedience. Here she must work day and night among contaminating waste with death always a shadow over her shoulder.

She is joined by disturbed Janine(Madeline Brewer), who doesn’t quite understand the situation at hand after everything that’s been done to her. We also catch up with June’s husband Luke(O.T. Fagbenle) and best friend Moira(Samira Wiley), who escaped to Canada and are grappling with their own demons and survivor’s guilt. June may be broken along the way, but her desire to fight comes back gradually as she is once more asked to contend with surviving the regime and. Things take many turns as she approaches her due date.

The first season covered the novel, so with this sophomore effort, the producers and writers are going beyond the source material in different ways. And they pay off very well, though I’m sure many where unsure of whether it would pan out successfully. 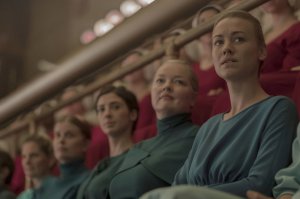 Certain parts from the novel that were absent from the debut season are present, but Season 2 is largely its own beast that takes the story in different directions. Thematically, Season 2 delves into guilt and the price of rebellion. June must contend with her actions having consequences on others and the devastation that fighting for what is just can bring. Duality features heavily, most prominently with June/Offred and the constant struggle of the two. It’s like a constant battle of which side will win out as the regime digs its claws into her and forces her to make a choice. Once more, the visuals are strongly composed and extremely evocative. Particularly striking are the oranges and burnt golds of The Colonies; a barren landscape almost in a permanent dusk where those who oppose Gilead are enslaved and made to work among toxic waste. It’s so cinematic and disturbing. Plus the ever-increasing close-ups provide the uncomfortable ferocity and horror of Gilead and how much of a toll it takes on the characters. Flashbacks detail the rise of Gilead and expand on the characters as they reflect on life before the takeover. June’s voice over may be limited a bit more this season, but whenever it’s there, it sure as hell does the job at capturing her inner feelings.

Just like the debut season, this second season is chock full of shocking moments. There are plenty that truly stick with you for their brutality, disturbing nature and power.

The mock execution scene where the Handmaid’s are rounded up like cattle, have their mouths covered with muzzles and have nooses placed around their necks in what they believe to be their last moments is a stark and traumatising opening. Set to the sound of Kate Bush’s ‘This Woman’s Work’, it’s hard not to hold your breath. A ceremony where the Guardians of Gilead are awarded with wives who are a lot younger and basically children is chilling and totally horrifying.  One of the biggest moments of sadness and emotion is June being reunited with her daughter briefly, before she is ripped from her arms once more. It’s a gut punch to the system. And in another shocking moment, never have the repeated words “We’ve been sent good weather” been so devastating and alarmingly creepy. If anything, Season 2 ups the ante on violence and suffering. Many have criticised the increase in violence but I think The Handmaid’s Tale isn’t doing it for exploitation value, but for a cutting and harsh impact on the viewer. It’s an undoubtedly tough series to endure but it’s ultimately worth it.

Yet for all the hurt and anguish heaped upon us, hope is mixed in there in doses. The last shot hints at searing determination and immense changes to come for the characters and story. And boy did I dig it, though it will definitely divide many. My only little gripes are that some of the latter stages feel a tad rushed in the scheme of things and some things don’t go anywhere. But this is a tiny flaw in what is otherwise an arresting and disturbing series.

Elisabeth Moss is once more on powerful form; bringing out the sadness, rebellion, grief, guilt and survivor of June/Offred.

The character is very much in two halves here and the strong Moss plays both of them wonderfully and with skill. There’s the fighter side of June that scoffs and will do anything to escape and then there’s Offred, the subservient vessel. Again Moss and her eyes are marvels at telegraphing varying emotions almost simultaneously. Yvonne Strahovski also continues to excellently convey the complex Serena Joy, who is by turns despicable bitch and perturbed woman realising her role in her own unhappiness. It’s a balancing act that she walks exquisitely. A slithering nastiness covers Joseph Fiennes and his interpretation of Commander Fred, who is not above abusing his power for his own benefit and spouts lies at every turn. He really becomes very vile and hateful this season and Fiennes is very adept at playing to that. Ann Dowd is once again a big standout, essaying the part of Aunt Lydia. While still brutal and very vicious, the chinks of humanity begin to come through and you see that she does have a care for the Handmaid’s, even if her treatment of them is abhorrent. Dowd is just so endlessly watchable in the role. Max Minghella is quietly conflicted as Nick, who must contend with his love for June and staying alive in the heat of the regime.

Alexis Bledel is seen a lot more than last season and capitalises on it with a stunning performance.

Those blue eyes of hers are deployed in forms of rage, resistance and tragedy as we see the impact Gilead has had on her mind. She’s still a fighter at the end of the day and Bledel plays to that strength spectacularly. Madeline Brewer also returns as the haunted Janine; her wild eyes and strange mannerisms are all in order and successful. One of the season’s best weapons is the appearance of the youthful Sydney Sweeney. She plays the seemingly pious and brainwashed wife of Nick, whose naivety and sincerity is worrying but sets in motion different and irrevocable things. Sweeney is fascinating to watch as she registers that there is more to Eden than meets the eye. Although their capacities are reduced this season, both O.T. Fagbenle and Samira Wiley give great account of survivors guilt and the process of change. I just wished I saw a bit more of them. In cameo parts, Marisa Tomei as a punished Wife, John Carroll Lynch as a man persecuted for his sexuality and Cherry Jones as June’s fighting mother make their impacts felt. I must say the entire cast where at the top of their game here.

A searing, brutal and memorable series, the second season of The Handmaid’s Tale is alarmingly addictive even when it’s unsettling the hell out of you. You just want to know what happens next in the twisted world it so strikingly presents to us.

17 thoughts on “The Handmaid’s Tale Season 2”