The ever wonderful Gill invited me to take part in a blogathon to honour Kurt Russell and I simply couldn’t refuse.

John Carpenter’s science-fiction action film Escape from New York is rightfully held in high regard for its vision and plot. And with atmosphere, imagination and a bad ass lead character to boot, it’s hard to disagree.

The year is a then futuristic 1997. Manhattan Island has been turned into a maximum security prison where once you go in, you never come out.

In the main area that was once the central hub, anarchy reigns supreme with violence and destruction. When the President’s plane is hijacked and he crash lands in Manhattan, he is taken hostage by the local crime boss The Duke and his goons. He was supposed to be attending a peace summit with the Soviet Union, but that goes completely out the window with the events that unfurl. Sneaky and manipulative Commissioner Bob Hauk then strong arms the most unlikely person ever to rescue the President from an almost certain death. That person is Snake Plissken, a cynical ex soldier, serving time for theft. Snake is understandably not at all on board with this plan. But after being told that if he rescues the President within 24 hours he could be pardoned, he accepts reluctantly. Though Hauk makes sure he will do it as he has micro explosives implanted in Snake’s neck that will detonate if he doesn’t complete the mission. Hauk knows that Snake would use the opportunity to escape but has him by a tight leash now. With time ticking away, Snake enters the city where he encounters violence from various factions and some assistance by a rag tag group of renegades. They consist of a joking cab driver, hard edged lady and know all.

John Carpenter keeps events imaginative and engaging, with his ingenuity on clear display. I’ve always admired what he brings to a movie and he has the story be one that is very taut and entertaining. Some will say that the film has dated parts, which it does in areas, but the anachronistic touches really add to the oddball personality of the film that it isn’t easy to see why it’s a cult movie. Carpenter plays up the outlandish aspects of the story and the desecration of humanity, mainly in the case of Snake and his no cares attitude towards everything.

On the visual front, the practical effects have aged well, with the shots of New York through a futuristic lens being particularly inspired. We get a grimy dystopia to witness and one that has certainly influenced many a film since. Escape from New York is often billed in some quarters as an action movie(which in many cases it is), but for me it’s more about the moody atmosphere than anything else. The cyberpunk echoes and vision of a world in free fall really make sure that Escape from New York is a film to remember. John Carpenter himself provides the pulsing electronic score that compliments the futuristic setting and has just the right notes of darkness there too.

Kurt Russell completely owns the screen as the growling, scowling yet sardonically witty bad ass that is Snake. 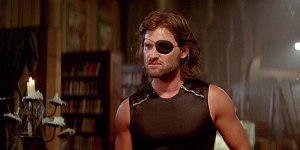 Russell provides the cynicism and swagger of a man who doesn’t believe in anything and is proud of it. He is ironically the last person you’d think of to rescue a president and that is what ultimately drives the plot. Seriously, Snake ranks as one of the most charismatic and bad ass anti heroes there is. Lee Van Cleef is on nasty form as the scheming and controlling Comissioner who uses Snake to his own advantage. Ernest Borgnine, Adrienne Barbeau and Harry Dean Stanton flesh out the crew that Snake falls in with excellently.With some serious style, Isaac Hayes rocks it portraying the crime boss who stands in the way of Snake succeeding. And there’s Donald Pleasence appearing as the President, who it is revealed is not as squeaky clean as he seemed.

Exciting, inventive and engrossing, Escape from New York is John Carpenter at his imaginative and full blooded best, aided by a fine performance from Kurt Russell as one of cinema’s best anti-heroes.

37 thoughts on “Escape from New York”