To celebrate 100 years of women getting the right to the vote in the UK, I decided to review the drama Suffragette.

A deftly done movie that blends fiction and truth, Suffragette charts the rise of the foot soldiers in the fight for women to receive the vote. Well acted and personal, it’s a movie that really strikes to the heart of the cause and what it meant for future generations.

The story begins in 1912, London. Women have for some time peacefully campaigned for the right to vote but their voices have gone unheard. 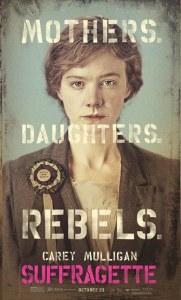 We meet a working class laundress named Maud Watts. She’s had a tough life of abuse and turmoil from men , though she has some comfort at home with her husband Sonny and son George. One day, she is caught up in a demonstration by suffragettes who break all the windows in the West End. Although she doesn’t know it yet, this event and further ones will have a big impact on her. For more demonstrations and talk of women getting the vote takes place, also featuring brutality from the police and the authorities. Having been so downtrodden in her life, Maud gradually aligns herself with the local firebrand Edith Ellyn. After hearing a speech by Suffragette leader Emmeline Pankhurst, Maud is now fully involved with the cause. This in turn earns the scorn of those closest to her and her husband refuses to let her see their son, but these sacrifices stiffen Maud’s spine and further her desire to fight for the vote. For Maud and the women she marches with are determined to gain equality, no matter what the cost.

There’s a real urgency and immediacy to the direction of Sarah Gavron. She excellently showcases the shared strength of women and employs a camera that always seems to be moving. It captures the whirl of events and the gathering storm of demonstrations that the suffragettes take part in, from smashing windows to hunger strikes and blowing up postboxes.

Abi Morgan’s script finely dramatizes the struggles of women at the time and how through actions, they were gearing up to have the same rights as men. The main story is fact-based here and is inspiring as well as important in what it depicts. Suffragette features fictional characters interspersed with real life figures in the movement, such as Emmeline Pankhurst and. The biggest message of Suffragette is how far these brave women were willing to go in order to get the vote and eventually equality. These were women from all walks of life who were united by a common goal and were prepared to go the extra mile to have their voices heard. What they went through was extraordinary and often brutal. We see women beaten, humiliated, force-fed and in the course of Suffragette. It’s not easy to watch, but that’s the idea. Women fighting for the right to vote went through a lot and this movie is a testament to them. This is an important story that needs to be told and in this very way. Alexandre Desplat is the person providing the building score that gains in momentum as events take flight and the fight begins to increase in steam and volume.

Carey Mulligan is the lead in Suffragette and boy does she deliver.

She has this ability to be totally unaffected and filled with conviction without resorting to histrionics. Her face, that speaks so many volumes, is a marvel at depicting Maud’s shift from bystander to fighter and makes us feel every beat. Helena Bonham Carter shines as a leading member of the group and one of experience, while Anne-Marie Duff is fine as the forceful and agitator of the suffragettes. Then we have Brendan Gleeson as a police inspector caught in between sympathizing with the women and enforcing the law. Ben Whishaw, finding some depth and unpredictability than some parts he is given, displays both a caring attitude to his wife and then a deep coldness when he feels she has shamed him. It’s something I’m not used to seeing by Whishaw, but damn if he doesn’t do it well. Though I expected to see more of Meryl Streep as Emmeline Pankhurst, her cameo is satisfying and provides a rallying cry to Maud and a whole host of women.

An unflinching and inspiring movie that never sugar coats the brutality and resistance that was met by women campaigning for the right to vote, Suffragette has much to recommend in its reels.