A warm-hearted, funny and overall perennial Christmas classic, A Christmas Story is required viewing at this time of year.

It is the run up to Christmas in the early 1940’s and nine-year-old Ralphie Parker is an excitable boy. 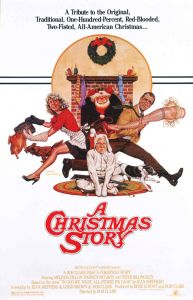 The one thing in the world that he wants for Christmas is a Red Ryder BB gun. So he sets in motion plans to convince everyone he should receive his desired gift. The problem is that it isn’t as easy as that as his wish is greeted with the remark ‘You’ll shoot your eye out.’ His eccentric family; a grumbling father who prides himself on , a caring yet firm mother often keeping the peace and an awkward little brother, provide a lot of the humour present. Ralphie attempts to persuade his parents, his teacher and even Santa that the Red Ryder BB gun is the best gift, but finds himself hitting stumbling blocks a long the way. Between dodging the local bully and the various annoyances caused by grown-ups, Ralphie attempts to make his plan a success. Along with other vignettes, we follow Ralphie in his quest to get that treasured toy gun in any way possible for his young mind.

Bob Clark is the inspired guy directing this seasonal favourite with love and appropriately from a child’s point of view. It’s a credit to him and the winning screenplay that Ralphie doesn’t become some whining brat, instead being a little boy with a big imagination who desperately wants that Red Ryder BB gun . 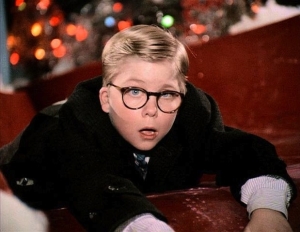 This is one of many things that really creates such a warm atmosphere, as we can all see ourselves a little in Ralphie and his insatiable love for the gift he wants. A Christmas Story is essentially a rumination on the adventures of childhood and how everything looks through youthful eyes. dares, games and observations on everything around it are all here for us to enjoy and also reflect ourselves on our own adventures in the younger times of life. With added insight also given info how family can be quirky but no matter how strange, they matter at the end of the day. The framing device of an adult Ralphie narrating his campaign to get his desired present is inspired and the often wry but still excited words we hear, still let us remember the kid that’s inside all of us. There is a very personal slant to the film as it is narrated by Jean Shepherd, whose semi-autobiographical book was the basis for the film. A Christmas Story is extremely successful at getting to the heart of what it means to be a kid; how things seem a big deal when you’re little, how events can seem unfair but can pan out well in the end and how Christmas plays such a big part of it all.

We’ve all surely felt like Ralphie at one point or another with that one special present we lust after as if our lives depended on it? And we’ve all experienced what we deem to be unfair treatment and behaviour that seems strange from adults, best envisaged in unusual scenes that highlight the fears of Ralphie. That’s why A Christmas Story resonates so beautifully with me and almost everyone else who sees it; the fact that it is not afraid to tread into moments of darkness, before bringing it back to fun and lightness with adventure coming through again. And talk of memorable moments in a movie; A Christmas Story boasts plenty. From the leg lamp that Mr Parker wins and proudly displays in the front room to Ralphie’s friend getting his tongue stuck to an icy lamppost  as a dare, there’s no shortage of parts to love about A Christmas Story.

Our main cast is totally amazing and so well suited to their roles, cleverly embodying them with a great deal of fun. 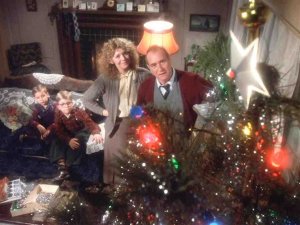 Peter Billingsley is marvellously engaging as the protagonist of Ralphie. Everything revolves around him and the young Billingsley, with his large eyes and wonderful facial expressions, gets across what it is like to be a kid wanting something so desperately. You really can’t see anyone else playing Ralphie as Peter Billingsley is so good at it. And we really want him to get that Red Ryder BB gun because of how well and how relatable Ralphie ultimately is. Darren McGavin is exceptional as the serious and often gruff father who does love his family, he just doesn’t show it enough. The serene and protective side of the family comes with the lovely Melinda Dillon as the mother, whose support and doting are balanced with her degree of fairness and quiet authority. Having Jean Shepherd be the narrator was a fantastic choice as his voice is so full of both childlike glee and an adult’s view of things. It works on so many levels within A Christmas Story and is yet another reason to love it.

A fun evocation of nostalgia, the awkwardness of childhood and above all Christmastime, A Christmas Story lives long in the mind and heart. You can watch this movie every time it is near the December 25th and never get bored, due to the spirit and love it has.