A comic horror set at Christmas, Gremlins makes for deliriously entertaining and twisted viewing after all these years. Time has not diminished both the dark humour and shocks of this Yuletide movie that has a deliciously morbid way of subverting things. This movie is perfect for Christmas viewing with an edge and has lost none of the strange charm it had upon release.

Billy Peltzer is a young man working at a bank in his hometown of Kingston Falls. 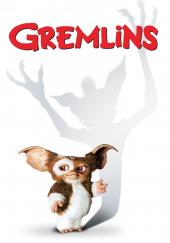 It’s a largely uneventful, suburban town that is about to become anything but peaceful as Christmas approaches. His inventor and travelling salesman father Rand returns from a trip bearing an unusual gift; a fluffy creature known as a Mogwai. Billy is entranced by this present that he names Gizmo and is very grateful, yet his father warns him that he must obey three rules to do with the new pet. He shouldn’t expose it to bright light, he mustn’t get it into contact with water and most important, don’t feed it after midnight. Billy is understandably thrilled with Gizmo and spends a lot of time with the guy. But through accidental carelessness, Billy violates the rules and after getting Gizmo wet, he spawns creatures that resemble him. At first these creatures appear to be just like the furry Gizmo, but they trick Billy into  feeding them after midnight which has dire consequences. The creatures go from cute and cuddly into scaly, greedy beasts known as Gremlins, whose only goal is full on chaos. Once more of the creatures have spawned, they lay siege to the town with murderous glee and maniacal destruction in mind. With the Gremlins running wild and terrorizing the sleepy town, it’s up to Billy and his girlfriend Kate(whose quick thinking comes in handy) to stop the maniacal creatures once and for all.

Joe Dante behind everything with his excellent direction of the shocking but wholly engrossing material. 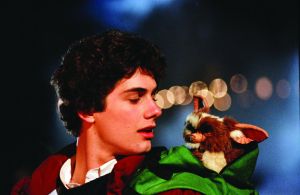 One can tell he is relishing the destruction of suburbia with unusual and twisted ways being employed by the title creatures. Dante has his tongue firmly in cheek for this outing and I’d all the better for it. Shots of black humour colour so much of Gremlins that you can’t imagine the movie without it there. Irony and juxtaposition play a significant role in making Gremlins so wildly watchable and full of mayhem. For instance, the fact that such nasty little critters spawn from one of the cutest things put on screen is deliciously arch. And the various filmic references( Snow White makes an appearance as the Gremlins take a break from their carnage to sing along with it) are very much in keeping with Dante’s pop culture nods that regularly appear in his movies. 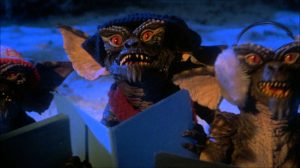 Plus, while the town of Kingston Falls looks lovely, some of the residents are far from pleasant. Billy’s neighbour is a xenophobic man, but worst of the bunch is the penny-pinching old bag Mrs. Deagle. These two people are ones that are targeted first by the Gremlins, in a sort of grim poetic justice. I mean who can forget what happens to Mrs. Deagle? It’s a movie I’ve seen a million times and yet I never tire of it. A lot of that is down to the tightrope being walked between tongue in cheek humour and outright shocking carnage being depicted. Not many movies can get both camps right, but Gremlins is a success on blending these two disparate things into a sinister yet hard to resist ride. A great example of both the humour and horror is the scene in the kitchen, where Billy’s mother demolishes a bunch of hungry Gremlins. Now until this point, we’ve seen Billy’s mother as mainly just a supportive homemaker. But when the attack starts, she goes to town on the beasts with ferocity that is hilarious and alarming. And it can’t be stated enough how memorable and iconic the move and especially Gizmo and the crazy Gremlins have become in film history. The effects used for Gizmo and the Gremlins is still excellent, ensuring that all of them have a semblance of personality in the grand scope of things. Jerry Goldsmith’s score is an extremely lively and creepy one, that gets across the maniacal mischief of the Gremlins and the shocking spectacle of a picturesque town under seasonal attack.

Zach Galligan makes for a likable hero as he is a regular guy who is trying to undo what he accidentally set in motion. 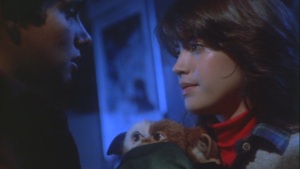 He is relatable and the very ordinariness of him is a gift that Galligan uses to his advantage. Phoebe Cates is similarly excellent as his girlfriend, possessing a certain girl next door charm and smarts that is endearing. Both actors are ones that make you immediately like them, because they seem like regular people who you want to succeed in stopping the eponymous creatures from even more destruction than they’ve already caused. Hoyt Axton is delightfully sly and oblivious as the inventor father whose gadgets are not quite the best, while Frances Lee McCain comes into her own as the avenging mother who protects her house fiercely. Polly Holliday is nastiness incarnate as the horrible neighbour who ends up at the mercy of the Gremlins in a very satisfying sequence that is as shocking as it is grimly amusing.

Devilishly sinister and darkly hilarious in parts, Gremlins is Christmas movie making with a difference that is sure to entertain audiences the world over. If it’s one outrageous ride into scares and chuckles you need, Gremlins is the required cure. After watching and reviewing Gremlins, I think this is the time to wish everyone a very Merry Christmas.