For my first entry into Crystal’s Tracy and Hepburn blogathon, I covered the classic movie The African Queen yesterday to celebrate the talents of Miss Hepburn. Today. I’m going to honour the greatness of Spencer Tracy with my review of the 50’s Western, Broken Lance.

A western with definite Shakespearean overtones to it, Broken Lance is a resounding success with its fine cast and confident direction that bring drama and emotion to the genre.

Matt Devereaux is the hardened and tough patriarch of four sons and most proudly, a cattle empire that is his life’s work.

While successful with his business due to his ruthlessness and charisma, his parenting hasn’t been particularly special. For Ben, Mike and Denny, he has been a tyrant since they can remember and forced his temperament onto them. For his youngest son Joe, it is a different picture as he respects his father and is good at judgement. This doesn’t go down at all well with any of the other brothers. Further animosity is present as Joe is mixed race, owing to Matt’s marriage to the dignified Señora Devereaux, a Native American princess. Ben in particular feels resentment towards this and also the fact that his father is refusing to modernise their business in a changing world. Matt however is too old and determined to change his ways, least of all for his children who he finds largely ungrateful. Trouble brews when a nearby copper mine pollutes the water supply, leading to the death of many of Matt’s cattle. The grizzled Matt takes matters into his own hand and raids the mine. The law gets wind of this and Matt is threatened with prison for his actions. It is here that tragedy and turmoil really come out among the four brothers, leading to eventful and irrevocable changes.

Edward Dmytryk directs this highly charged Western with the right flavour for drama and character. Broken Lance is essentially a Western interpretation of King Lear, with the daughters being replaced with sons and the King being a cattle ranch owner. But the presence of that great play gives Broken Lance more of an edge in comparison with other traditional Westerns. 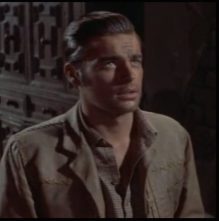 The script, using characters and depth, is largely responsible for this and how it depicts the unfolding tragedy of the family. Plus, in a rare move for a Western of the 50’s, Broken Lance features a positive representation of Native Americans. The vast majority of depictions in Westerns is a negative one; Broken Lance rectified this by having the main Native American characters be people of virtue and right. I respected Broken Lance for taking this stance and also highlighting the prejudice faced by Native Americans. My only niggle with Broken Lance is that I wish it were longer; the film is quite short and while a fine Western, I wanted just a little bit more. That shouldn’t however take away from the excellence of the overall movie and how it has a difference to it that most Western’s do not take. It’s with the drama that Broken Lance particularly excels at and while there is action present in Broken Lance, it never descends into just another shoot out movie. A grandiose score really gets us into the events of this Western with flourishes of strings and drums.

At the centre of it all and completely dominating events is the marvellous Spencer Tracy, in full grizzled and boisterous mode.

The character of aging patriarch with his own brand of justice and love for his land( at the expense of the love from three of his sons), Tracy explores the various facets of him with rich texture. On one hand, he’s a domineering man who it must be said has been harsh towards his sons in terms of wanting them to follow him. But in another breath, he’s a very charismatic man who has worked hard to make his cattle ranch a success and is thwarted by the ineptness and animosity of his three older sons. Such a great combination from an accomplished actor is the main source of vitality in this dramatic western. Robert Wagner, in a very early role, manages the decency and respect of a young man who looks up to his father, yet suffers because of it. It’s a good showing from the then young actor. The ever effective Richard Widmark( always exceptional when playing a wrong un), brings seething rage and resentment that lead him to ruin and dishonor the father he thinks has forsaken him for his entire life. There is still some humanity in there, but Widmark most succeeds at discovering the nastiness and bitterness of the part.

In support, Katy Jurado beautifully captures the dignity and strength of Matthew’s second wife, who knows all about the prejudice aimed her way but rises above it with grace and humility. Sometimes just a look from her is enough to voice her inner thoughts and love, the role providing a peaceful balance to the frequent clashes between the men of the movie. Jean Peters is the pretty love interest for Wagner and sweet enough to pull it off. Hugh O’Brian and Earl Holliman are honestly not given much to do but follow their older and more resentful brother, but do the job good enough.

A character driven Western that has the right amount of drama and action to it, Broken Lance showcases great direction and acting, particularly from the legendary Spencer Tracy.