A well paced and inventively structured film noir thriller, Sorry, Wrong Number makes fantastic use of its setting and unfolding of dark mystery to form a tight and tense movie. Expanding on a famous radio play yet keeping a certain flair for drama in a limited setting, plus a fine cast headed by Barbara Stanwyck and Burt Lancaster, Sorry, Wrong Number is recommended viewing for noir and thriller fans who will no doubt find it very satisfying.

Leona Stevenson is a demanding, selfish heiress who is largely bed-ridden and when we meet her, alone in her Manhattan apartment.

She gets more than she bargained for when she accidentally overhears a phone conversation(thanks to a telephone glitch) between two men, plotting and arranging a woman’s murder that very night. Leona has been trying to reach her husband Henry, who works for her father’s pharmaceutical chain, but hasn’t been able to locate. Panicking over the horrible plot she overhears, she becomes desperate to stop it happening. The fact that she only caught little bits of the conversation doesn’t help when she calls the police, due to a lack of clear evidence. Calling whoever she can think of for attempted help or news on Henry, through various flashbacks, revealing events and machinations fall into place regarding everyone it covers. We see Sally Hunt Lord, who was once romantically linked with Henry, Leona’s Doctor Alexander who holds important information about her, her controlling father James, a chemist named Waldo Evans, a mysterious gangster Morano and of course Henry himself, who we glimpse as feeling emasculated and weak thanks to his overbearing spouse. An underhand and malevolent scheme is also found here, but just how does it link to Leona and the planned murder? Growing more anxious and distressed as pieces slowly come into fruition but still remain confusing, Leona is left to decipher them before it is too late.

Anatole Litvak dials up the suspense with skill, letting the film play out largely in real-time and lets us discover many alarming things without spoon-feeding them to us. His control over ambience is also evident in how the mystery is gradually evinced and how it turns out differently than one might have wondered. Often times in some movies, flashbacks can often feel more than a bit redundant and overused. The same can’t be said of Sorry, Wrong Number, as the dips into the past are crucial to our understanding of the characters and their reasons for actions that may come back in some dark form. Sorry, Wrong Number provides a great exercise in visual style with panoramic and gliding camera shots that take in important details that tell parts of the story in a teasing but imperative way. 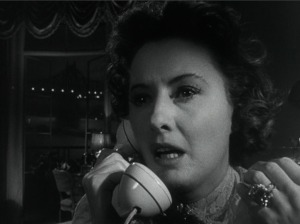 The characters have a sense of change in them from the flashbacks to present, further giving a level of both distrust and curiosity. There is a heightened paranoia and isolation as Leona is prone to overreacting but thus time is telling the truth and all alone in her apartment. The home is often somewhere we consider safe which is reversed here. Then again, the nefarious and murky atmosphere of outside as the various facets of the puzzle come together is equally as dark. There is no real place of safety, which plays beautifully into the sinister heart of film noir and allows the film to have the feelings of a pitch-black noir. The twists are complex and unexpected, yet only sometimes confusing, thankfully the shocking nature of it all is intact and on display. Drama and genuine menace can be heard in the fine score by the amazing Franz Waxman, who really knew how to ramp up tension and suspense with his music.

Barbara Stanwyck impressively heads the cast as the pampered heiress Leona, whose night is turned into waking hours of terror once she hears the murder plot.

Stanwyck strongly gets across the various mood swings and changes from past to present of the character, that are very intriguing to watch. Moving from self-absorbed and entitled to terrified and near mental collapse as everything unravels, Stanwyck covers it all with the assurance of the great pro she was. Her biggest achievement is that she telegraphs that Leona is not just some innocent victim in all of this, but a manipulative and petulant woman who we still feel some form of sympathy for in her time of horror. Burt Lancaster plays with his somewhat tough guy image to find something spineless and tired within husband Henry. While there is darkness to him, we aren’t quite sure to what extent it will emerge, mainly due to the excellence of Lancaster in the part. He may just be misunderstood or possibly to easily lead into something fishy , Lancaster suggests a mixture of both. There is a good ensemble of supporting characters played by great actors, who somehow or another slot into this mystery. Ann Richards is quietly convincing as a former flame of Henry’s, while Wendell Corey supplies us with much knowledge as the doctor. Probably the most sympathetic character is the chemist who is somehow sucked into the dark web of dealings, and played with understated gravitas by Harold Vermilyea. Ed Begley and William Conrad flesh out the other two people who have bearing on the complex story.

A tense and efficient noir, Sorry, Wrong Number is just the ticket for when you want some murky thriller of complex motives, nice performances and atmosphere to watch.