A glorious fantasy of a young girl discovering her talent for turning the tables on the unfair grown-ups in life, Matilda gets the right amount of dark humour and inspiring fun of kids taking control that Roald Dahl had in his book. This review will most likely be biased as I adored this movie growing up, but that’s why it’s perfect to review.

Matilda Wormwood somewhat stands out from her unappreciative and neglectful parents.

Being a very bright girl with knowledge far beyond her tender six years, she craves learning and understanding. Unfortunately, she is cursed by a family of barbarians who don’t care about her; crooked father Harry, shallow mother Zinnia and utterly bratty brother Michael. They are addicted to television and their own selfishness to not notice the precocious daughter they have, leaving her to find company in books and knowledge from around the age of two. Out of anything, Matilda definitely wants to go to school. Yet upon finally attending school, she realises the unfairness of those older doesn’t just end at home. The principal Miss Trunchbull, is a monstrous bully who brutally keeps children in check with force, abuse and terror.

Thankfully for bright Matilda, she meets the inspiring and lovely teacher Miss Honey, who understands her and treats her fairly unlike every other adult Matilda has encountered thus far. With Miss Honey in her corner and becoming something of a surrogate mother, Matilda blossoms. Yet Miss Trunchbull is having none of her spirited nature and takes it upon herself to especially humiliate Matilda. But lately, the wise and precocious girl has discovered that she possesses certain supernatural abilities that come into practice when she’s belittled or challenged by nasty adults. Soon, she finds a way to harness these powers to turn the tables on Trunchbull and her parents once and for all.

Danny DeVito utilities a sprightly and darkly mesmerising touch to the film, having a wide range of unusual angles place us in the position of children. Everything is rendered intimidating and strange by DeVito, which ties in with the story as it reaches magic levels of Matilda 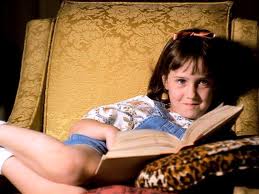 finally standing up for herself. this fun for kids to see a young person growing and getting her own back on those that have mistreated her and equally as entertaining for grown-ups to observe the gleefully dark and not sugar-coated content, which is faithful to the spirited imagination of Roald Dahl. While it deals with the feeling from children that adults don’t understand or respect them, Matilda fantastically exaggerates this(in keeping with the twisted fable from Dahl) which is satisfying and fits into a story of self-worth and having the power to manage some control and decision. I mean who wouldn’t want to get revenge on a bullying headmistress whose hobbies include throwing children over the garden fence for wearing pigtails, forcing them to gorge on an impossible cake or locking them in a nail filled cupboard known as The Chokey?.

It’s the very oddball essence of Matilda that makes it such a good film; it often goes in different directions than you’d think for a film aimed at children and is very mature in passages. Matilda has humour, some frightening moments(make that all that involve the harridan of Trunchbull) and heart, best envisaged by the sparky and gifted protagonist whose powers lead to amusing and revenge filled mischief of the best kind. As I previously referenced, I had a big love if this movie as a kid. Visiting it as someone older, it still retained the kooky charm which I fondly remembered. A spirited score is just the ticket for the madcap content of Matilda, with unpredictable rhythms and puckish movements.

Mara Wilson is sublime as the special title character, whose vast intellect and power cause her to emerge as a likable lead and mature presence.

Despite her tentative years, Wilson beautifully gets across Matilda’s love of learning, the wanting for someone understand her and her helpful and plucky personality that comes into play in nice fashion. I really can’t think of another person except Mara Wilson playing the role of Matilda so well and with such spirit. Danny DeVito also stars as Matilda’s low life father, with oily charm and rat like sneakiness. Complimenting him is his real life wife Rhea Perlman who is fabulously trashy as the bingo obsessed mother. Embeth Davidtz successfully makes Miss Honey a beacon of hope, yet never slips into overly saintly, due to a feeling of buried strength and having experienced the hardships of life. Yet the best performance in Matilda is the one given by Pam Ferris as the nasty Trunchbull.

Ferris sinks her teeth into the part and brings it to furious and villainous life; making for a terrifying antagonist that everyone would fear if they were in her presence. There is a gleeful horror to Miss Trunchbull that Ferris plays to perfectly, ensuring that you really hate this woman and hope she gets some form of poetic justice at the hands of Matilda and her growing magical powers.

A fun and enjoyable not afraid to be dark and unusual, Matilda is a magical movie about how we can all be special and find a power within ourselves in life.