More sassy attitude, kicking ass and sex appeal adorns Full Throttle, the sequel to the entertaining first film. Like its predecessor, it’s completely brainless and illogical but so watchable due to that very fact, it’s difficult to not enjoy it.

The Angels( Natalie, Dylan and Alex) return to fight crime and go undercover to thwart dastardly plans. We pick up with the girls as they rescue a US Marshall from captivity in Mongolia.

Returning to America, the girls are informed of what their latest mission will entail. This time the unseen Charlie sends them to recover a pair of titanium rings. Encoded in these rings are the names and real identities of everyone in the Witness Protection Program. It appears that someone wants to sell the rings to the highest bidder; which just so happens to be any of the major crime outfits in the world. Gearing up for action with an array of costumes and skills, the girls encounter former Angel Madison Lee, who has clearly turned her back on the side of good and definitely has something to do with the plot. Added to the mix is Irish mobster Seamus O’Grady, who happens to be Dylan’s former boyfriend who she put away in prison years ago before changing her identity. This revelation hits Dylan hard as she fought so hard to escape her past, only for it to now resurface. From fast car chases to martial arts fighting, The Angels are back doing what they do best; stopping bad and shaking things up.

McG is back making things bigger and employing his music video skills for the montage heavy and frankly ridiculous movie. Once again, it’s a movie that doesn’t take itself seriously and on more than one occasion, rips itself off. The plot is essentially a riff on the first movie yet is a little tighter( I say little because it’s still pretty all over the show but still highly fun). The plot is the least of anyone’s concerns when the action and innuendo filled lines hit override.

That’s where the fun begins as the gorgeous girls go from a dirt biking race to performing in strip club, all in the name of stopping crime. Various sub-plots of their love lives are superfluous and don’t go anywhere, the colourful fights and array of disguises is where the film is at. Like the title says, Full Throttle is what it gives in terms of silliness and amusing sequences that are pure ludicrous and candy coloured from head to toe. The film can best described as the equivalent of a sugar rush. You know you shouldn’t enjoy it, but the sweetness is difficult to resist. And even though it is a major rehash of the first film, is anyone actually paying that close attention? The soundtrack is lively and pumping, granted there is nary a second music isn’t playing.

Cameron Diaz, with her mega watt smile and perky energy, is delightfully goofy and animated in the best possible way. 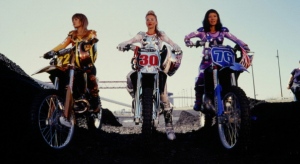 Drew Barrymore stands out the most as tough chick Dylan, who has to deal with the ghosts of the past. The film is hardly deep at all but the little bits of drama that reveal more of her( whenever the chance is given) are played remarkably well by Barrymore. Lucy Liu provides many laughs and feistiness as the brainbox of the troika, who can really deliver Once again, the three share a good rapport and have sparkling levels of energy. Some actually effective laughs come courtesy of Bernie Mac playing Bosley; his loud and frequently hysterical outbursts are just what the doctor ordered in this fizzy cocktail of a movie.

Demi Moore, looking gorgeous and acting diva like, has fun as the vampy former Angel now on the side of evil and taking no prisoners. She seriously has a good time as the villain of the bunch and suits the over the top nature of the film. Justin Theroux, though underused, is pretty menacing as Dylan’s psychopathic ex who wants revenge on her for turning him in. Crispin Glover returns as the inherently creepy Thin Man, unfortunately he is ill-served by the film that doesn’t make the most of his unusual appearance and mannerisms. In support, John Cleese gets a few good moments Alex’s oblivious father. Once again, Matt LeBlanc and Luke Wilson are not really necessary or well used in the film and their parts could have easily been trimmed.

Virtually a variation on the first film with more explosions and killer stunts thrown in, Charlie’s Angels: Full Throttle is guilty pleasure viewing of the highest echelon. You wouldn’t tell a friend you like this movie, but you’d secretly bask in its sheer dumbness when you needed a popcorn movie.