A super stylish crime caper brimming with verve and visual flourishes, The Thomas Crown Affair may occasionally lack depth but that is more than made up for in the lightness of foot and sexy but conflicted chemistry between stars Steve McQueen and Faye Dunaway.

Thomas Crown is a suave and dashing business tycoon, who boasts wealth that many would simply die for. Though he has everything he could possibly ask for, he craves adventure and is now bored with the system of riches that he is a part of. 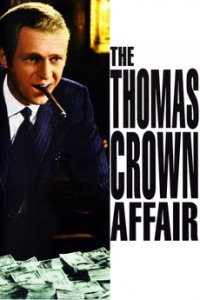 So he carefully plots a bank heist, even though he doesn’t have any need for the money. He employs five men to orchestrate this elaborate scheme, making sure that his identity is left unknown to them to avoid any trace back. The plan works and the heist is a success, with Thomas thrilled with the results. Thomas is very pleased with what he’s accomplished, knowing that his plan is pretty much airtight for the most part. Yet those who were affected by the theft are not going to be quiet and soon questions are being raised. Insurance investigator Vicki Anderson, who always gets the job done, is called in to examine this theft and piece it together. Her incentive is 10% of the and with her array of charm, allure and intelligence she manages to pinpoint Thomas as the culprit. But rather than just take him in, Vicki finds herself attracted to the beguiling and wily Thomas. Both know that the other is up to something and yet this doesn’t distract them from falling into passionate clinches with each other. It does however throw a spanner in the works for them as loyalties are severely tested and their affair is proving difficult as well as compromising. The question is, how willing is Vicki ready to look the other way because of her feelings for Thomas or how much will her personal pride and efficiency take control?

Norman Jewison has that cinematic touch and eye for visual impact that this film and needs and forms the backbone of it with a deft clockwork like precision. The use of split screen pushes the movie along with free abandon and lively verve, that keeps the attention for a very long time. The leads play off each other in a game of questioning the other but being extremely attracted at the same time. indecision and allure, along with the potential of possible courtship, despite them being on opposite sides of the law is what makes the core of The Thomas Crown Affair lively and sexy. 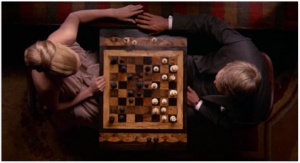 The best example of this is the almost wordless chess scene where the two eye each other up and gradually tease the other in a game of minds and bodies. Everything is left to the imagination as they embrace and the camera spins, proving that you don’t need copious nudity to be erotic and can be very naughty by suggestion. Though the story is not exactly what you would call thought-provoking, the quick pace and sizzle of things keeps you involved and along for the entertaining ride. The main selling point of The Thomas Crown Affair is the glamour and intrigue it has. The lifestyle of Thomas is enviable and through bright and very colourful moments of polo matches, it’s a fine life that we view for this man who has everything. A brimming score of skittish rhythms and languid romantic strings is simply gorgeous to listen to. The greatest instance of music in The Thomas Crown Affair is Windmills of Your Mind ,which is a hauntingly romantic and apt song that describes the way that Thomas is constantly on the move and a million steps ahead of everyone. The song won an Academy Award and I can see why, it really contributes to the aura of the film and is utilized gorgeously throughout.

In the title role, Steve McQueen is the suave, epitome of cool and collected. His Cheshire Cat smile and smooth demeanor belie a boredom and restlessness with life( even though he has almost everything a man could dream for). 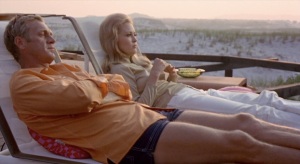 As nonchalant as the character seems, McQueen quietly displays the vast intellect and forward thinking that is often not realized by those around him until it is often too late. The best word for McQueen’s portrayal is cool, he is a man who many guys would kill to be and many women would love to be near. Faye Dunaway is the dogged but ultimately torn foil to McQueen’s charms, her unease at her own feelings for Thomas making most of the drama. Dunaway, while being extremely seductive in the part, brings forth the required determination and inner conflict out in varying degrees of nuance. As I previously noted, the rapport between McQueen and Dunaway is excellent and the Sparks are most definitely there, even as personal feelings come into question and stands must be taken that could jeopardize and further heat between the red-hot duo. Paul Burke does good work as the detective on the case, as does Jack Weston playing the getaway driver in the heist set up by Thomas.

Stylish and intricately done, The Thomas Crown Affair has oodles of appeal through its 60’s atmosphere and scintillating partnership of the main leads that essentially bring out more to the film than the story might suffer to some.