A refined and yet thorny examination of love, infidelity and loyalty, Separate Lies is quite an engaging drama, with a good script from Julian Fellowes, who debuts as director and the work from the main principal actors.

James and Anne Manning are a well-off married couple who divide their time between London( where James works as a top barrister) and a house in Buckinghamshire.

James likes to think of himself as an honest man who believes in the truth, though he can often be compulsively needy in having things in order and chastising those who don’t meet his standards. Anne loves her husband, but has grown tired of the boredom of life when he’s always away and also the repetitive nature of doing most things for him. It isn’t quite the idyllic life that from the outside it appears to be. Into their lives comes Bill Bule, the son of a local Lord. He is a devil-may-care man who catches the attentions of Anne, without James realising. Around this time, the husband of the couple’s cleaner, is struck by a speeding car that fails to stop. The man dies shortly after due to the injuries sustained. Anne takes an interest in helping Maggie deal with her grief and James is bewildered as to why. There is some talk that the car that hit Maggie’s husband was similar to the one owned by Bill, which sets the suspicions of James running wild. Things come to a head when Anne reveals bluntly that she has been having an affair with Bill, as well as the fact that it was her who was driving when was hit. Shattered by these twin revelations, James is sent into a tailspin. Even though Anne wants to tell the police of her involvement in the death of Maggie’s husband, James, thinking of his own reputation and the wife he still loves, persuades her not to. Keeping this dark secret on the down low is soon proving hard for everyone, even the usually cavalier Bill. Everyone in the damaged picture finds themselves doing battle with their feelings, especially James, who is caught between helping his unfaithful wife and thinking of his own back.

Julian Fellowes does quite an excellent job at directing this cool yet quietly piercing story. His strongest suit is exploring the aftermath of lies and the desire to keep things secret. If there’s q fault in his work, it’s that he sometimes doesn’t scratch the surface enough. He does have an acute eye for the minute details of behaviour, but some of Separate Lies may have gone on to be more substantial if it hadn’t been so polite.

It does border more than a little on the overly genteel side and could have been a bit more forthcoming, and yet the subtleties of a lot of it did manage to make their bright presence felt. Separate Lies often feels a bit cold at points, but the largely dispassionate view it takes of the characters is still an interesting one that doesn’t fall into melodrama. It presents the characters as ones with many faults and whose choices are ultimately what changes and shapes them in ways that will have fatalistic consequences. There is no character to easily identify with because your loyalty, much like James and Anne’s actions, are ultimately conflicted and go between different people and extremes. It’s commendable that the script allows the roles to be flawed as it avoids the trap of getting us to side with one person more than the other. We are left to make our own minds up about the people who populate Separate Lies and what they all register in terms of emotion from us. The trickling sadness of the score is used sparsely but very efficiently, making certain scenes really stand out.

Tom Wilkinson, who for my money can always be relied upon for a stellar performance,  does it once again here. He gets the right amount of selfishness and critical thinking mixed with a desolation that lies below the buttoned up existence of barrister James. 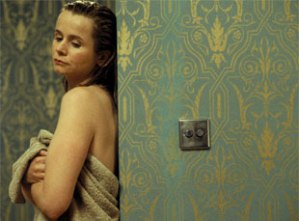 This is a man whose life is all about order and being in control, so when it spins off course, he is galvanized into making a difficult choice after being left to flounder. The dilemma he faces is beautifully and strongly performed by Wilkinson, who suggests a lot about the hurt and how he must let his emotions come out after being under wraps for so long. No less his equal as the seemingly dutiful wife is Emily Watson, who houses desire and bitterness within her being. Watson deftly plays Anne as a woman of many contradictions; in me breath she is regretful and destroyed by her actions and then almost ambivalent and apathetic about her indiscretions. It’s a difficult task to accomplish, but Emily Watson does it with a depth and surprise that makes it very believable and real. The moral quagmire of James and Anne is simply marvellous to witness with Wilkinson and Watson at the top of their game in the acting stakes. Rupert Everett features as the rich cad and provides the catalyst that has a severely deep and shattering impact on all. The role doesn’t really call for much in the way of development, though Everett still makes it watchable. In supporting roles, Linda Bassett as the cleaner with a possible hidden agenda and John Neville as Bill’s stately father, do pretty good stuff in their respective parts.

A bit more oomph may have benefited Separate Lies, but the outcome of it is a largely arresting and melancholy movie that deserves attention for the way the characters are written and the strong performances from the cast, in particular the fascinating leads of Tom Wilkinson and Emily Watson.