A blend of supernatural horror and a teen movie, The Craft is the kind of film that will appeal to me always. Witchcraft and the awkwardness of being a teenage outcast mix for eventful results.

Sarah Bailey is a lonely teenager who moves from San Francisco to Los Angeles. She is a troubled girl who feels isolated and once tried to kill herself due to personal demons. 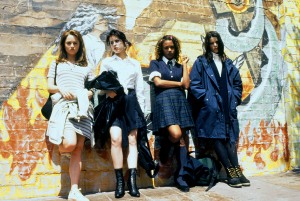 She begins to attend a Catholic School not long after arrival. Sarah is ostracized from the main in crowd, but she gains the attention of a trio of misfits. The group contains goth leader Nancy, shy Bonnie and sarcastic Rochelle. The girls in question have been dabbling in witchcraft and after witnessing the latent abilities that Sarah possesses, Sarah becomes a part of their group and friends with the outcast troika. This ultimately completes their witches circle and they all begin to use magic to aid them in their own troubles( of which each girl has many). Sarah wishes for popular jock Chris, who bad mouthed her to everyone, to like her and finds that he morphs into her personal lap dog. Quiet Bonnie, who has burn scars on her body, sees them vanish away. Rochelle gets revenge on a racist bully by causing her hair to fall out. And Nancy wants liberation from her white trash life and this is granted when her abusive stepfather dies, leaving her and her mother with a lot of money from a policy he took out. 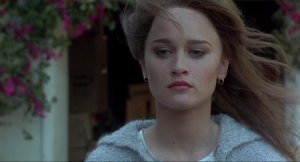 While the girls use magic for their own means and it comes in very handy, events take a disturbing turn. They invoke the spirit of a deity named Manon, and it impacts on them all. This is especially true of Nancy, who craves the power magic gives her and results in a descent into mania. Sarah realises this and sees that she must confront Nancy. Yet this is not as easy as that and the girls are eventually drawn into dark conflict, with dire consequences.

Andrew Fleming presents a film that shows witchcraft in something of a different light to the usual Hollywood fodder. Often witchcraft in movies is depicted as something evil, whereas here it is shown as something that is powerful and depends on how you use it. 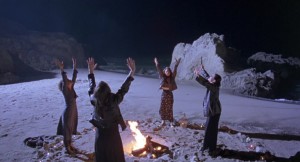 He twins this with the themes of alienation and troubles that each of the girls had, showing that they are united by their shared experiences and that by using magic it is an outlet for their collected frustrations. Fleming’s direction is confident as he slowly ladles on layers of darkness due to the girls playing about with magic and getting their fingers burned. A smarter than expected script elevates the movie with the way it fuses the supernatural with the pains of growing up. These are captured with great work from the writing and performances. The effects used within The Craft are actually still pretty good, especially a hallucinating scene late in the film and the girls using the power of glamour( the ability to make one look like another). It helps that there isn’t an overabundance of effects used, instead the story takes the main stage. A 90’s soundtrack provides just the ticket for this excellent brew, further enhanced also by the score that has an almost otherworldly and spiritual pulse to it. There is also a lot of fun to be gleaned from looking at how 90’s the movie is and how cool it still remains.

A cast of 90’s sensations features in The Craft, ensuring greatness from the roles given. In the lead of troubled Sarah, Robin Tunney is very convincing at exuding a lonely sense of melancholy and terror as her observance of magic begins to alarm her. Tunney is a relatable presence on screen and probably the main one who you get to know best during the run. Making one hell of an impression and stealing the movie in my eyes is Fairuza Balk. 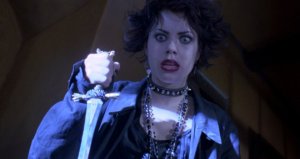 For me, she is an actress who has always had an off-the-wall appeal about her and that is evident in the part of Nancy. She completely rocks the sullen demeanor and snarling attitude of the part, plus a dark charisma to boot. As the movie progresses, Balk is seen displaying a real sense of horror in the latter stages of the film as Nancy becomes psychotic. When The Craft finishes, it is Fairuza Balk who will be in the memory for her performance. Neve Campbell is very good as the shy Bonnie, whose years of feeling ugly have taken an impact. Campbell interprets the part well, charting the rise of Bonnie’s confidence that slowly morphs into sheer narcissism and arrogance. Completing the quartet of witches, Rachel True finds emotion and subtlety in the form of Rochelle, who has been the victim of racial abuse for a long time and finally gets revenge. Skeet Ulrich takes the part of Chris, who becomes Sarah’s slave yet gets out of control while Christine Taylor is nasty and bitchy as the popular bitch getting her comeuppance for her taunting of Rochelle. In a small but pivotal role, Assumpta Serna exemplifies wisdom and experience as a magic shop owner who warns the girls of magic’s danger, but to no avail.

An assured movie that is nicely performed and enjoyable on a number of levels, The Craft is one of those movies you can watch time and time again.

I must apologise for my recent absence. My Internet began playing up a lot and it took me some time to get it sorted out. Thankfully it is now up and good again. I watched a few good films in the time when the connection of Internet was bad so you can expect some reviews very soon. It also gave me time to practice more nudism. The photo below may give you an idea of how I spent my time. 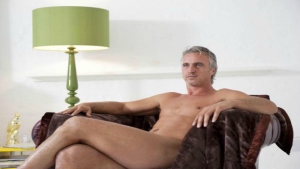