An inspiring movie that takes basis from a true story, Norma Rae is refreshingly realistic and filled with a deep heart, best embodied by the bravura work of Sally Field that garnered her many awards of which she was more than deserving of.

Norma Rae Webster works in a cotton mill in North Carolina, just like almost everyone in her small town including her aging mother and father. 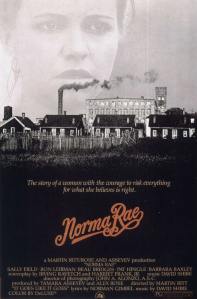 The place is one that is defined by one industry and it’s almost expected that everyone will work there at one point. Norma is a woman with a reputation in the past of drinking and going from one abusive relationship to the next, as well as having children by different fathers which many people take issue with. She has recently married Sonny who is supportive yet chauvinistic and boorish on occasion. The mill that she works in has taken its toll on both her mother and father over the years and despite not being the most educated person, she is starting to realise the unfairness and harsh treatment from management. Around this time, New York Union organizer Reuben Warshowsky arrives and begins talking of better working conditions, which alarms both management and workers. At the beginning, Norma Rae has resided herself to the fact that she’ll likely always work at the mill, yet with Reuben around and after hearing one of his speeches, she starts to reconsider what she though she knew. 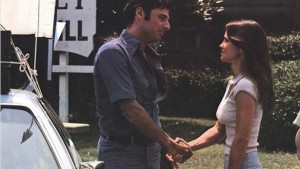 Over time and quickly inspired by Reuben, Norma Rae realises that she can’t simply stand back while these poor conditions continue and while originally reluctant to get involved with Reuben, she slowly gets on board with him and starts to see potential in herself as she grows stronger. With growing confidence and bravery to stand up for herself from Reuben, Norma starts a fight for better conditions and Union, even though she is threatened by her bosses, alienated from her husband and shunned by many of her co-workers. Norma finally gets her chance to make a difference in her role as leader and agitator begins to get significant attention.

Martin Ritt infuses Norma Rae with unfussy direction that closely looks at the heroine’s growth and the horrifying conditions of her work. His intimate camera pans over the sheer amount of demeaning work everyone at the mill is put through with the feel of a documentary, never forgetting that the film takes its basis from a true story. Ritt knows exactly how to mix depth of character, politics and inspiring tones as Norma fights for Union despite vast opposition from nearly everyone a around her. 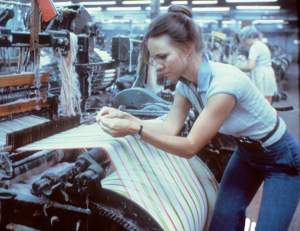 Martin Ritt brings a minimalism to the film that places us within the film, never letting us forget the basis of the story and the grit provided from what we witness. A well constructed script strikes the right chords of seriousness and emotion; allowing us to journey with the title character. Also refreshing is while there is something of an attraction between Norma and Reuben, it doesn’t dissolve into an affair which marks it as something different due to the fact that the attraction is more one of admiration than passion. In the odd area, Norma Rae couldn’t have been tightened up a bit but this is a very minor flaw in a pretty effective and moving picture. The music is sparse which lets the audience focus on the unfolding story more, yet the haunting title song ‘It Goes like it Goes’ provides the perfect opening and close to the film.

The ace in the hole is Sally Field, who won a much deserved Oscar for her turn as the evolving title character. I liked the way that Field revealed that Norma is no saint but whose heart and growing strength act as arsenal for her as she slowly becomes a fighter in a marvellous transformation.

She makes Norma Rae a relatable character because of how she doesn’t go out to make her a too good to be true heroine, instead painting her as an ordinary woman discovering her worth. It’s an authentic, emotion driven performance that shows Field at her best as there isn’t a beat that she misses when playing Norma, who unearths a power in herself that she never know was there. I can’t speak any more highly of Field’s award-winning turn here, other than to say that she is nothing short of heroic in a tour de force performance. Ron Leibman provides stellar support as the stirring Reuben, who sees potential and strength in Norma Rae, as well as boasting a quick-witted way of taking down opposition. In the part of Norma’s husband, who suspects that her alliance with Reuben is something more, Beau Bridges is appropriately concerned and meaning well, but hampered by his masculine tendencies and big attitude to question what his wife is up to. Pat Hingle and Barbara Baxley respectively play Norma’s parents, whose health has declined due to their torturous work at the mill.

Rousing yet grounded and touched with straightforward but emotive direction, Norma Rae is an excellent movie that shows the true courage of one woman no one thought much of and Sally Field at the peak of her powers in the role of the eponymous character.