Still a horrifying and blood splattered movie outing, Sam Raimi announced himself as a force to be reckoned with by crafting The Evil Dead, which is still considered a cult classic. Made for barely anything, Evil Dead transcends limitations through the sheer fun and terror it provides in spades.

Five college friends, consisting of Ash, his girlfriend Linda, his sister Cheryl, best friend Scotty and his girl Sally, travel to a cabin in the woods to vacation. 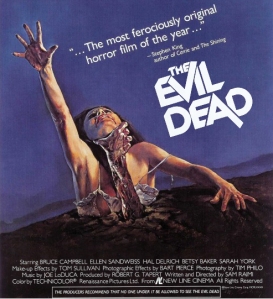 The place is pretty grim-looking, but the young quintet go in any way. Pretty soon, strange events lead both Ash and Scotty to the basement where they discover a tape recorder and a creepy old book. The book is revealed to be The Book of the Dead and the tape translates what is said inside. The group plays a recording they found and through the incantation of a presumed dead professor, they unleash a demonic evil that soon takes residence in the cabin in the bodies of those inhabiting it. The only way to rid the place and their hosts of the relentless evil forces is through body dismemberment. As the demonic possessions become more frequent, it comes down to Ash to take some form of action, even if it includes hacking and slashing the rest of group to save himself. As the evil never lets up and keeps coming, Ash better think quickly before there is no one left to fight the increasingly malevolent force that envelops the cabin and all in it.

Sam Raimi showed his creative talents directing The Evil Dead, employing a dazzling array of camera shots that further the terror that refuses to die. Particularly impressive and deeply effective are Raimi’s usage of POV shots that zoom towards the cabin suggesting the evil that lurks and kinetic tracking shots that relate a swooping sense of unease once the spirits are brought back and ensue in causing bloody mayhem among the group of five. Considering that this would have been the first feature-length film from Sam Raimi, his command over the camera is remarkably assured. Within The Evil Dead, the enthusiasm for the project practically radiates off-screen as Raimi injects unexpected moments of black humour among all the goriness.

And speaking of gore, The Evil Dead is gleefully nasty and inventively wild in its use of bloodshed. Body parts fly across the screen, beheading by shovel is a shockingly grisly method of death employed by Ash and the film is practically bathed in blood at one point, all of this exuding horror and thrills in equal measure. The practical effects utilized within Evil Dead do have a hokey quality, but they are at supposed to look like glossy CGI, which in turn adds another sense of ghoulish atmosphere to the film as the effects have a well-worn look that makes the possessions a lot creepier than if copious special effects had been in play. Evil Dead goes well above the low budget it had and revels in the fact that it’s a film filled with imagination and craftsmanship. It’s been documented that crew worked through difficult conditions due to the lack of a million dollar budget, but still gave everyone a ride in terror filled with gruesome effects and death in what sounds as if it was a labor of love. The story of the making of the film is equally as compelling as the movie itself as it sounds like the uncomfortable working conditions added almost to the terror on screen. The ominous music score provided is simply chilling and becomes a bog indicator of what horrors lie in store for the group, even as the film opens and they all seem oblivious to it.

The characters present are pretty ordinary at the start then radically changed and each is played well by an inexperienced cast. Bruce Campbell makes the biggest impression as the unlikely hero of Ash.

The role allows him to infuse Ash with a cowardly helplessness that makes it look as if he will be one of the first to die, but is reversed once he gets it together to fight. Ash is something of the underdog here who must overcome clumsiness to survive. Campbell makes the character both funny and oddly heroic, a change from the usual alpha males in movies. Betsy Baker, Ellen Sandweiss and Sarah York are most effective when possessed as they add to the carnage and mayhem present with unnerving laughing, super strength and hunger as demonic evil. Hal Delrich who plays Scotty makes it seem like his character will be the one to outlive the terror as he fights back, unlike Ash in the beginning. But slowly, he loses his cool and everything falls onto the hapless shoulders of an unprepared Ash.

An inventive and wonderfully shot horror classic, The Evil Dead deservedly takes its place among the greats of the genre by giving audiences a wild ride that never lets up on the gore or scare factor. This is that sort of movie that is both fun and frightening, largely down to the talents of Sam Raimi. I wholeheartedly recommend The Evil Dead to both fans of cinematic technique and horror hounds as it has enough to appeal to both parties.