I thought it was about time I got back into my X-Files reviews again after a hiatus. So here is my review of last season of the original run. At this point in the show, it was running out of steam and becoming a bit stale. Season 8 was redeemed by an emotional finale, but I could sense that the show was running a bit low. With Season 9, there are obvious flaws here, but it still has moments that shine. Spoilers will be following in this review so be warned.

Mulder(David Duchovny) has gone into hiding after bring tipped off by Kirsch about the fact that he’s in danger. Meanwhile, Scully(Gillian Anderson) is taking care of her son William and is on maternity leave for the beginning of the season feeling she must protect her son from the possible dangers her work poses, before coming back slowly to work.

Determined Doggett(Robert Patrick) is investigating Kirsch as he believes he has links to the conspiracy of creating super soldiers that has been referenced by many for a while. It turns out that Kirsch actually despite his own terse and shifty persona has been helping all the agents present even though those above him have been manipulating him. Doggett and good friend Monica Reyes(Annabeth Gish) continue investigating the X-Files and experience more strange cases, later being joined by Scully and often Skinner(Mitch Pileggi). There is also another new Assistant Director, Brad Follmer(Cary Elwes), who has history with Reyes and is something of an ambivalent character who you’re never quite sure what to make of. More evidence is discovered of the covert experiments to create indestructible beings within the darkness of the government. Scully’s baby begins exhibiting signs of powers far beyond logical explanation, that leads all the agents down into the conspiracy and how it holds links to baby William and the dangers that are posed to him. The main danger begins with a UFO cult who believe that William will lead the Super Soldiers and resort to kidnapping the child.

Thankfully, Scully and Reyes manage to rescue him, but the experience leaves Scully having to make an important and painful decision.When Mulder comes out of hiding, more danger is sure to follow. So what will become of everyone in the story?

By this point in the scope of The X-Files, I believe it was obvious to many that the show had run its course. The absence of Mulder poses one of the biggest problems in Season 9. Season 8 can be forgiven because Mulder reappeared again in the middle and remained, but here his presence is limited greatly bringing incoherence and inconsistency to the mix. A lot of it has that disjointed feeling again that continues. Some Monster of the Week installments are good, but then there are those that start to feel dated and stale later. The various story lines vary in quality, with some very good and some sinking ships. 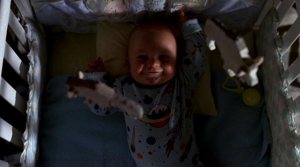 The William story line was one of the better stories as it had some genuine emotion present. Plus, it led to some of the best episodes of this up and down season so it’s something to be grateful for. The Super Soldiers part of the story is good enough, but it never quite makes an indelible work where it really should have.

Despite mounting weaknesses and diminishing results, some shining moments of note can at least be gleaned. The two-part season opener has an excellent air of mystery and intrigue to it, that starts what becomes a very flawed season off very well. ‘Trust No 1’ in which a mysterious man who is in fact a Super Soldier plays on Scully desire to see Mulder in order to draw him out of hiding again is a nail-biting episode. This is an episode that really plays upon the fear of being observed without knowing it through black and white integration of camera footage prowling around the characters. It has a real flavour of The X-Files of old. Emotions run high in both ‘Provenance’ and ‘Providence’ as William is kidnapped and Scully is prepared to do whatever it takes to get her son back from the hands of the cult. It showcases Scully as a fierce matriarch going the distance and fighting with all she’s got to save her son.

A comical highlight has to be ‘Improbable’ which guest stars Burt Reynolds as a most mysterious man whose card playing and numerology somehow chimes in with cases of murder revolving around the number three(luck, chance and fate play a large part too). Some of the situations in the episode are hilariously done with Reyes and Scully both having to play checkers with him before discovering something important. Reynolds has a blast in his part and steals the episode away from everyone with his amusing yet mysterious personality. ‘William’ provides sadness as Scully has to decide to give her son up for adoption as the powers of evil will never stop searching for him as long as he is with her. And I have to talk about the final two episodes ‘The Truth’ in which Mulder surfaces again after being accused of killing a military man, who was in fact a Super Soldier. A trial ensues with Skinner representing Mulder and a whole array of characters past and present being seen in various forms. An exciting getaway for Mulder and Scully is helped by those closest, where they must now ponder a unnerving future.  The use of flashbacks and past characters is a good touch to have as well as Mulder’s return.

Yet while the finale answers some burning questions, it gives even more of them more convolution.  I just really wanted a bit more closure than anything in the finale, but as it was, the finale was pretty good albeit ambiguous.

Season 9 may be something of a nadir, but at least there is excellent acting to be found. Gillian Anderson once more provides the show’s emotional anchor as Scully and is as adept as ever portraying her as a maternal figure of determination. By this point, Anderson has fully embodied the character to such a degree that we believe every move she makes because we’ve been along on the same journey as she has over the course of nine seasons. David Duchovny is shortchanged this time around as Mulder, as he appears only twice and it is the finale. He’s still exemplary as Mulder, no one else could have played the character, but I just wanted more of him this season considering it was to tie up loose ends. Robert Patrick impresses as Doggett, whose skepticism brings out the stern yet sarcastic side to his character, even as he begins to come around to the idea of the paranormal. Doggett is a very by the book guy and Patrick captures this excellently, while revealing a vulnerability beneath his tough guy image.

Partnering him is Annabeth Gish, who comes into her own as Reyes. Balancing logic with a curiosity towards things that defy natural laws, Gish plays Reyes as a determined yet caring agent. Doggett and Reyes are no Mulder and Scully, but then again I don’t believe there were meant to be. Mitch Pileggi is resolute as always playing Skinner, who finally added to the main cast. I liked seeing this touch as Skinner has proved a very good and purposeful ally to the show and the characters. Cary Elwes is a shifty presence as Follmer, whose loyalties are very much called into question during his time on the show. An underused Lucy Lawless manages to be intriguing and alluring as a renegade super soldier who passes on information to Doggett. The problem is I would have liked to have seen more of her character than what the show had.

So the original run of The X-Files is a definite mixed bag, that sometimes over complicates itself. Still, there is some respite to be found, even though the show could have ended on a somewhat better note.

Though I must say I’ve enjoyed delving into the show and going to the beginning to full experience it after hearing so much about the show. I have found the show to be excellent and can see why it is so iconic, even if the quality slowly ebbs away as it goes on. And fear not, I will continue charting my X-Files watching with a review of the second movie and the six-part series from earlier this year.